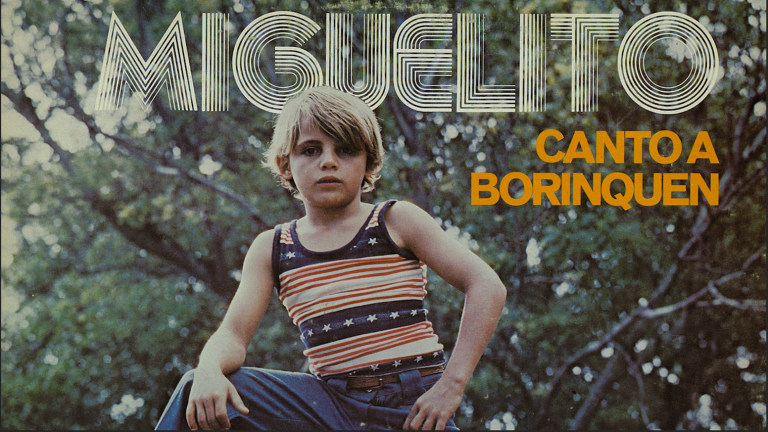 Nominated for the Discovery Award for Best Debut feature at the Radiance Film Festival 2019, Miguelito is a documentary by Australian film director and musician Sam Zubryck that follows the tale of a young Puerto Rican boy, Miguelito, and legendary New York Record producer Harvey Averne.

The documentary begins by playing the famous salsa title track from Miguelito’s 1973 album Canto A Borinquen, depicting a black and white photo of the young blonde boy from the cover of the LP singing salsa. Presented in a documentary format, the film uses interviews of various musicians, people from the salsa community, family and footage of the director himself to present an incredible musical journey of the life of this salsa star.

But who is Miguelito? And what happened to him? As the nomination would suggest, curiosity and discovery are central themes in this documentary where we quickly learn that once you dig a little deeper into a subject, things aren’t what they appear to be on the surface. Both the director, Sam Zubrycki and record producer, Harvey Averne, have something in common: intrigue (and their ‘love’ for Miguelito). We quickly learn that this will be the central piece of the puzzle that not only sparked their initial intrigue with this young kid but will also help solve the case of the mysterious disappearance of Miguelito.

As a record collector, Sam first discovered Miguelito’s album when travelling through Colombia, so naturally, the documentary begins here, in Cali, a place re-knowned for being the salsa capital of Latin America. The unique and original cover of the album, a young Puerto Rican boy, coupled by a mystical voice singing an adult’s musical genre, made Sam yearn to learn more about the story. The salsa community across the world can help him but only so far, and they might lead him astray along the way.

The film in its entirety takes the audience through a road trip across Latin America to uncover this curious tale. With beautiful footage of Puerto Rico back in the 70s, its golden tropical beaches and its dark, urban underbelly, New York’s chaos and Colombia’s tranquility. In this documentary, we not only discover the tale of Miguelito but also that of a thriving salsa movement and its differences in each country, largely thanks to Harvey Averne.

As myth and legend has it (and we learn that there are a lot of myths in Latino music), record producer Harvey Averne first met Miguelito at the San Juan Airport and was so swept away by his aesthetic and voice, that he missed his flight back to New York, deciding there and then that they would record an album together. He accumulated some of the finest salsa musicians in Puerto Rico at the time to work with him: Papo Lucca, pianist and leader of La Sonora Ponceña, Kito Velez and Nelson Feliciano, the legendary trumpeters from Guánica, conguero Eladio Perez, as well as renowned virtuosos Mario Hernandez and Maximo Torres. Julio Castro, Jamie Ramirez, Junior Cordova, Mike Merrero and Gel Torres were also involved.

From the sexy, sumptuous, colourful and tropical charm of Puerto Rican salsa, to the more urban, heavy, loud and fast-paced beats of the New York salsa, it’s not just the person that lives and breathes salsa, but it’s the location that largely dictates the pace of the music. We breathe, feel and learn a lot about Latino music across this journey, but we are also struck with the harsh reality of Latin American society’s struggles. Despite all its beauty, poverty, drugs and crime cannot be evaded.

By providing in-depth interviews and discussions of his family, following Harvey Averne’s story and that of the salsa community, the director does a miraculous job of capturing a raw glimpse into human emotions and relationships, with both family members and strangers, that sometimes makes for uncomfortable viewing. Whilst the director certainly has a soft spot for Averne, we are left on the fence on what Harvey’s true intent for the kid was, whether his intentions were admirable and we are left to question how far the trust of a stranger can really go.

But whose story do we believe? Did Miguelito really die in a car crash like Latin American myth would have Sam believe or is there more to the story? Why did Miguelito disappear off everyone’s radars after such a phenomenal hit? Did Harvey really desert him?

There are bitter tensions between the family and Harvey Averne and his encounter with the family is one of the most heart-wrenching moments of the film. After such high expectations, Averne moved Miguelito (the 11 year old bread winner of the family) and his family to an apartment in New York. Although he played in Madison Square Gardens, his record didn’t sell and the family saw no profit from his hit. After a hard, cold winter, the family were left with no choice but to move back to Puerto Rico to seek refuge.

It was a downhill spiral from then. Averne lost contact with the family and Miguelito quickly fell into the trap of drugs and crime. Whether Averne really cared for him is left open ended but the documentary throughout shines a flattering light on the producer. Hindsight is a beautiful thing and it’s moments where Averne is kicking himself: “I should have done better”, that we really learn how complex the relationship between a child and a music producer can be. Was it really Averne’s fault that Miguelito died of a drug overdose? Perhaps, perhaps not. But thanks to Sam, Miguelito’s legacy remains.

Miguelito was wiser than his time. The pathos of his young words is uncomfortably ironic. He talks about how cocaine makes you stupid, and the damaging effects of weed, he was wise, wiser than his years and his words still ring true. With the interviews with the family, we feel the pain that drug addiction can inflict on family members and the individual. It’s an illness that can shatter hopes, dreams and potential. Yet with his early death, we are left with something beautiful that cannot be robbed from Miguelito.

The legacy of Miguelito singing “Payaso” as a young 11 year old child lives on eternally through his LP. He was the first among a wave of young Latino singers to sing salsa, and inspired a generation to follow. Canto A Boriquen not only uncovers a superb tragedy, but takes readers on a sublime musical journey across the Americas. Who knows what other hidden musical superstars from Latin America are waiting to be discovered. We can only hope that Sam Zubryck will find out.

Miguelito will be screening at the Raindance Film Festival in London (18th-29th September 2019). Tickets available from Eventbrite.