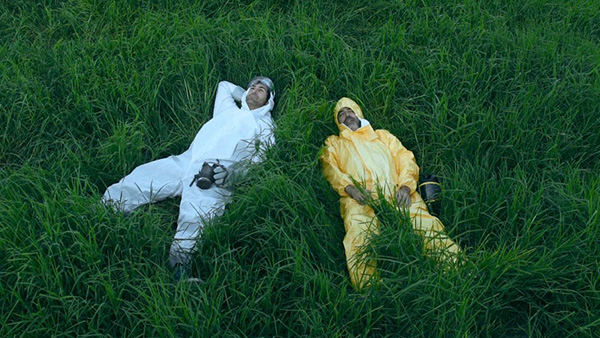 Adán Aliaga and David Valero’s film, Noah’s Ark (El Arca De Noe) on post-economic crisis Spain is a visually rich and droll satire on the absurdities of the modern world seen through the eyes of three characters: Miguel “el oso” (the bear), Paco “el lobo” (the wolf) and “el avestruz” (ostrich). The former work initially as security guards at a defunct or mothballed cement works in San Vicente del Raspeig (Alicante) and the latter is a drug-dependent waif who spends her waking hours shoplifting for food or in a torpor. El lobo sidelines as an alternative therapist and el oso makes automata which he programmes to give voice to his despair. In the background, radios keep us abreast of world events and national news – the 24/7/365 media loop – and there is great accompanying music from Vincent Barrière.

The preamble is that in the modern world nothing is any longer what it seems. A popular representative democracy is neither popular nor representative; anything productive is eschewed in favour of financial alchemy; a currency (the euro) is established without the necessary political and financial apparatus to support it; all profits are privatised; all debts socialised and the majority of people treated like so much chaff blowing in an economic storm not of their own making. The genius of modern finance now means that an erstwhile solvent country like Spain (i.e. with low debt to GDP) is now in hock to the tune of €1 trillion or 98.4% of GDP.

The House That Jerry Built

In the Spanish instance, the animal spirits of the market, decided to construct the mother of all property bubbles ignoring the fact that excessive supply can only work if there is excessive demand. There wasn’t and it didn’t. Pop! A dust-blown sign for the ‘aeropuerto’ at San Vicente del Raspeig serves as a reminder. It speaks a la Ozymandias: “My name is fractional banking, king of alchemists: Look on my works, ye mighty, and despair!”
Ironically, el oso has a market for his sculptures, too, yet no-one has the means to pay for them. It’s a neat yet bitter reversal on the theme of supply and demand.

Covetous Of An Ark

What is to be done with all this wickedness? Well, in an increasingly agnostic and atheist world – even in nominally catholic Spain – black is still not white however hard some might wish it to be. There is, though, something called humanity. That humanity tends – even without an external moral authority – to know when it has been turned over by a load of thieving shysters. In this case, it doesn’t take God to prompt the characters into action. The desire to build an ‘ark’, more properly a desire for escape, is contrived by the protagonists as means of taking them out of the miserable, meaningless loop of under-or un-employment that the powers-that-be have constructed for their ‘appreciation’.

The two security guards alternate day and night like Ralph E Wolf and Sam The Sheepdog (in the Tex Avery cartoons), finding various diversions to keep them sane in the pointless, debilitating enterprise before even that ‘opportunity’ ends.

Eventually, in desperation, the two hatch a plan to escape. The first plan falls foul of a bank manager who cannot see the point of selling thousands of battery-powered, singing and dancing automata, despite a pre-order from China for 5,000 and a follow-up order for 200,000. With pre-contracts and a business plan, all the banker can ask is: “What are you going to invest the money in?” An incredulous silence follows. The implication is clear: this isn’t what modern finance is for. It also implies that the skills shortage involves an absence of brains and imagination among those who believe themselves, erroneously, to be the masters of all they survey.

The genius of el oso is put to work. The result is a Heath Robinson contraption that will take the three of them (el avestruz, too) into a different dimension. Interestingly, the fuel for the vehicle in this post-ironic world is toxaphene, a particularly nasty insecticide which stubbornly refuses to break down.

Change, though, has unforeseeable consequences. When they zoom from the present into the future and arrive back in the here and now, everything isn’t as it was before; there have been gains and losses.

What will el oso make of the parts and plans he finds in a skip? What’s more, what will the three make of their ‘new’ lives? To find out more, pop along to the East End Film Festival, held at various venues in East London, between 1-12 July 2015.

Noah’s Ark is showing as part of the East End Film Festival.