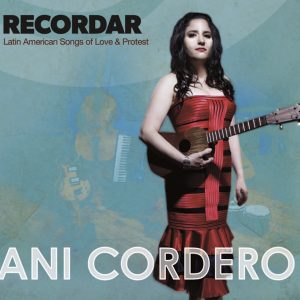 Recordar, to remember, is a bold statement. In a period, which has lost and is continuously losing its tutelary deities, with no replacements appearing on the horizon, to recall and reinterpret the meaningful voices of South American nueva canción is a nostalgic and strong gesture. A gesture which, in a way, states that a similar period is over and will be regretted forever.

It is not by chance that the latest album from Ani Cordero, entirely composed of cover songs, debuts with one of the most melancholy hymns of Victor Jara: “Deja la Vida Volar”, a song that states “el sol volverà, la noche se irà” (the sun will come back and the night will leave). Such a hopeful message flows freely through the entire opera.

Ani Cordero, a Puerto Rican-born based in New York with a remarkable and colourful music career, has grown up with the songs chosen for her album: each one revives memories, particular moments of her life. For example, “Tengo a Piel Cansada”, originally recorded by the Argentinian singer Piero, was constantly played by her mother through her childhood. “El Flamboyán” is an emotional music memento of her grandfather and the Puerto Rican independence war against Spain.

And “Aunque Me Cueste la Vida”, a tune performed by a close friend’s father and a hymn of the Dominican resistance under the dictatorship, was the epiphany that led off the work.

Recordar is a “combat-folk” record collecting 11 politically and socially significant songs from South America. Songs which have 40, 50, or even 60 years, as there written between the 1930s and the 70s, but which still sound abreast, aware of the current global situation. Today, they are synonyms of civil rights, soundtracks for demonstrations and rallies. They are also songs with a life of their own: immortal messages, which have been spread and are continuously spread far from the South American borders.

The strong relation which bond the artist and the songs is always evident and it is constantly respected by their new arrangements: they are never invasive or excessive. She treats the tunes as integral parts of her life: lulling them with soft percussion, and embracing trumpets, enriching them with exotic instruments like the flugelhorn, the n’goni, and the accordion and honouring them with illustrious guests like Charles Giordano, Tim Keiper and Omar Akil Little.

And, even if she sometimes misses the emotional drive characterizing the authors of her covers – though it should be said that covering Violeta Parra or Atahualpa Yupanqui is a prohibitive task – Recordar is an intense tribute to the formative influences of this Puerto Rican musician.

A tribute which is also a straightforward message to the new generations and the final act, “Una Canción Mansa Para Mi Pueblo Bravo”, originally written by Alì Primera and also called “El Cantor de Pueblo” by people from Venezuela, is a determined stance in this direction.

Recordar is available from Amazon and iTunes