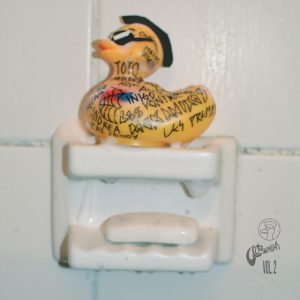 It’s been three years since Discos Pato Carlos launched with a compilation of music from Club Sauna’s underground parties. That led to interesting releases by Guarjol, Vicente Palma and The Chica, among others. Now is time to get back to celebrate the parties that have been keeping the underground electronic dance scene safe in Santiago, with Club Sauna Vol. 2.

Chile’s connection with techno is legendary, taking you back to the 90s when massive open air raves where you could spot Ricardo Villalobos and other emerging acts sought to bring joy to public spaces in a post-dictatorial Chile. Santiago is also where the prolific German producer Atom TM set down some roots and influenced a lot of locals, including none other than Jorge Gonzalez from Los Prisioneros, another innovator who put house elements in Chilean mainstream music for the first time.

That series of crucial moments led to a generation influenced with synth and machine sounds, making techno and house standard in festivals and clubs, though it didn’t take long for promoters to make it an upper class commodity. Parties and concerts started to get more exclusive and expensive, with dress code and admission becoming issues. That’s when the Club Sauna collective decided to show us that electronic music is for the people, and that inclusivity and diversity are as important to the music as the parties themselves. With a track record that included Placido Domingo, a public space party, and Recreo Festival, they joined forces with other electronic music crews from around Santiago.

This feeling of community is prominent on their second compilation, making Club Sauna more a concept than a tangible entity, with the participation of various actors of the Chilean and South American techno scene. International guests include Aristidez from Perú, Los Mekanikos and Iñigo Vontier from Mexico, Carisma and Ana Helder from Argentina, and Cristian Alejandro Ramirez from distant Germany.

In regards to locals, they have included producers from different labels from across Chile, starting with Toto Friedlaender from the southern city of Concepción and co-founder of local label Discos Cetaceos. Back in Santiago, there are exclusive tracks by Les Premes, Valesuchi, Roman, Oddy, Diamante Records representative Matias Rivera and last but not least, Andrea Paz. Andrea is behind Discos Pato Carlos alongside Ale Paz and Diegors, and also behind the Club Sauna parties, where the label members are joined by Roman and the hardworking Pety who keeps the whole scene moving forward from behind-the-scenes.

As you may be expecting, the music on this album will definitively make you dance, but it’s also an excellent example of how these self-managed spaces will allow us to keep the electronic scene alive and independent. It’s needless to say that you can download the album in MP3 and high fidelity WAV files for free.