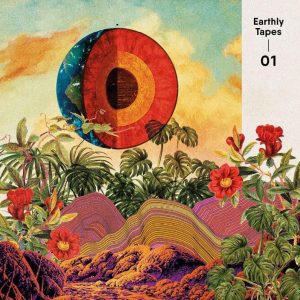 Smooth chant, Southern Cone mysticism, relaxing Brazilian groove – what more could you need to guide you through lockdown.

Earthly Measures are easing the claustrophobia of the time with their debut release Earthly Tapes 01.

It is the first in a compilation series, and, as all corners of the globe have been affected by the pandemic, fittingly the sounds on the record come from Ecuador, Brazil and Argentina, with two songs from the Anglo-Saxon world of Dreems and Ben Michael.

Ecuador’s Joaquín Cornejo, a producer and DJ based in Berlin, kicks off with his Latin American folklore inspirations, chants and soft vocals from Wabi Sabi in “Komorebi”. A nature-based start, as the song title is a Japanese word meaning the interplay between light and leaves when the sun shines through trees.

Janax Pacha, the stage name of actor Gabriel Epstein, offers us pipes, percussion, and drums in “Ama- Zona” which is another play on words and another song title calling to mind the natural world.

The next artist goes by a nom de plume as well – Ibu Selva. His latest EP Ecocide only came out on 25 March this year, and it takes aim at  commerce and exploitation. “Taperendy”, the song he’s contributed to Earthly Tapes 01, alludes to Ava Tape Rendy’i, the spiritual leader from the Teykue indigenous lands in Mato Grosso do Sul.

We stay in Brazil for “Outra Metropole”, from Carrot Green. Known for his versatility as an artist, switching between acid house, techno and disco. He is equally at home here, with a hypnotic blend of swirling rhythms and chill beats.

The last two tracks give an insight from the Australian Dreems and the Briton Ben Michael. Dreems’ “Flat Earth” has more attitude about it, with spoken word punching through and more edge to his composition than some of the other tracks, which have a stronger focus on green space and environmental energy.

Finally, “Until Now”, from Ben Michael, breaks through the six-minute mark, rounding off the compilation in a relaxed way, with simple beats and bright echoes, ringing from end to end.