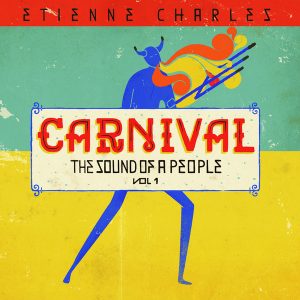 Review Etienne Charles – Carnival: The Sound of a People Vol 1

Like a good wine, sometimes an album needs to lie quietly on its side for a while in order to appreciate its full range of flavours. Trinidadian trumpeter Etienne Charles‘ 7th studio album is a case in point. It came out in March and I’ve been letting it settle ever since. Now that the cork is popped, so to speak, its richness is revelatory.

Educated at Julliard and now educator at Michigan State University, Charles gained a Guggenheim Fellowship in 2016 to explore the indigenous music and carnival traditions of his native Trinidad & Tobago. From his encounters and audio and visual field recordings, the raw material for the album emerged. He “had time to pay attention to every detail,” he reveals. “Each piece is differently composed, depending on the subject.” Yet “the music just came out. I’ve never had a project when the music came out this quickly.” It shows. This is an ambitious album that never sounds forced or pretentious. In its thematic reach and its rhythmic foundation – indeed in the very timbre of the trumpet playing, not to mention the title itself – the album recalls one of Wynton Marsalis’ more successful “projects”: Citi Movement, the closest thing perhaps to a bona fide masterpiece that the new-classicist from New Orleans has thus far produced.

Back in the day, I worked with a Trinidadian pan-man. We would trawl through the racks of Cheapo Cheapo Records in Soho during our lunch breaks and he would often speak of the wonders of the annual carnival. What he never revealed, however, was the dark history behind the celebrations. Etienne Charles, however, takes the listener on a musical and cultural journey that moves from Carnival’s past to present, and thematically from dark to light. The subliminal roaring and screaming on the opening “Jab Molassie” could be the sound of festivity, but equally the cries of torment. Built around a spare, haunting melody, the piece explores the origins of a character that Charles himself played as a little boy in Trinidad. The vengeful, fire-breathing, blue devil-spirit personifies “the atrocious acts perpetrated against us”. On the sugar plantations during slavery days, inconceivably sadistic punishments included being boiled in molasses.

The next two tracks celebrate two more prominent characters, the voluptuous Creole “Dame Lorraine” and the imagined African nobility, “Moko Jumbie”. On the former, in particular, the basic septet line-up – a moveable feast throughout, but on this occasion with the mighty David Sanchez on tenor sax and Brian Hogans on alto – is a dead ringer for Marsalis’ own septet on Citi Movement. Whatever the permutations, the band throughout is dynamite. Always rooted in a lovely loose-fitting groove, the basic line-up of trumpet, reeds, keyboards, bass and percussion accommodates on the five-part “Black Echo” suite especially the ‘enhancements’ that flesh out the history of the carnival bands’ instrumentation: the extraordinary Claxton Bay Tamboo Bamboo band on “Black Echo III: Bamboo”, and the more familiar massed pans on “Black Echo V: Steel”. Together, they celebrate the ingenuity of a people banned by the ‘ordinance’ of their imperial British masters from using supposedly subversive skin-drums and forced to seek alternative musical means of self-expression.

After the lyrical penultimate “Lullaby”, which features Charles’ (for once) muted trumpet and an educated Sanchez tenor solo, it’s fitting that the final track, “Freedom”, is driven euphorically by the djembes of local drummers Everald Watson and Wayne Osuna and the full-phat bass of guest, Ben Williams. “When it [the skin drum] comes back,” Charles explains, “we can really celebrate freedom. From my study, carnival is a celebration of freedom and who we are.” His aunt apparently charged him “with the task of figuring out a way to replicate the joy in carnival. It can be dark but in the end, it’s very bright.” Well, his aunt can be proud of her nephew. Etienne Charles’ album is a multi-faceted triumph and proof that he’s figured out Carnival’s historical agony and perennial ecstasy. This particular sleeper has become my jazz album of the year so far. I can’t wait for Volume 2.

Carnival: The Sound of a People Vol 1 is available from Amazon UK, Amazon US and Etienne Charles’ Online Shop