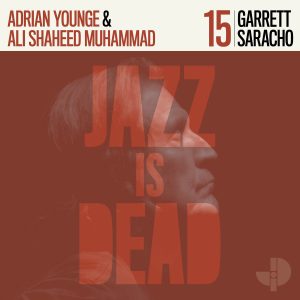 All right, class. Hands up anyone who’s heard of Garrett Saracho…? I didn’t think so. Me neither. At least, not until the latest release on Ali Shaheed Muhammad and Adrian Younge’s Jazz Is Dead label. Fifteen already!? The L.A.-based vibraphonist-turned-pianist has been described as “a composer, renegade, and wanderer” and, judging by his publicity photo, his profile bears a passing resemblance to Harry Dean Stanton’s in his role as the wandering soul of Wim Wenders’ Paris, Texas.

Garrett Saracho, a gaunt fourth-generation Angeleno with Apache and Mexican ancestral roots, has been round for years, working on the U.S. west coast – building sets for and eventually editing feature films, and later touring with his cousins’ semi-legendary Mexican/Native American rock group, Redbone. He developed his jazz chops in L.A.’s Watts district and earned himself a record deal with the influential Impulse! Records, but 1973’s En Medio sank without trace after a five-star review in DownBeat. Its melange of funk, Latin rock and spiritual jazz encompassed such diverse influences as Herbie Hancock’s Headhunters, War and Welcome-era Santana. The new album with Younge and Muhammad at the helm is his first in many moons, building on the vibe of the legendary lost En Medio. It’s still spiritual jazz, Jim, more or less as we know it, but this time – with the six-piece reeds and brass section – it’s perhaps more redolent of Sun Ra’s magnificent Arkestra recordings of the late ’50s, with a Latin tinge. Saracho plays acoustic piano throughout the eight tracks (co-compositions with the two producers), with a dash of marimba (on “The Gardens” and “Caló”). While Muhammad chips in from time to time, Younge supplies electric bass and guitar throughout, along with an assortment of other instruments, including electric sitar on “73” and “El Cambio Es Necesario”.

That improbable sitar probably suggests the kind of eclecticism one can expect here. Some elements of the resulting mixed bag work better than others. Personally, the five tracks that feature the full big band are the most rewarding: “Sabor Del Ritmo” is a suitably urgent, rhythmic opener; the funky “Trucha” features an infectious and memorable riff played by the reeds and brass; “The Gardens” is lovely, arguably the most fully-realised composition on the album; and the final two tracks, “El Cambio Es Necesario” and “Caló” round things off in the way that things began. I still find myself going back to JID004, the collaboration with Azymuth, as the most satisfying release in the series, but this one has enough great moments to suggest that Garrett Saracho has been hiding his musical light under a bushel for too long.