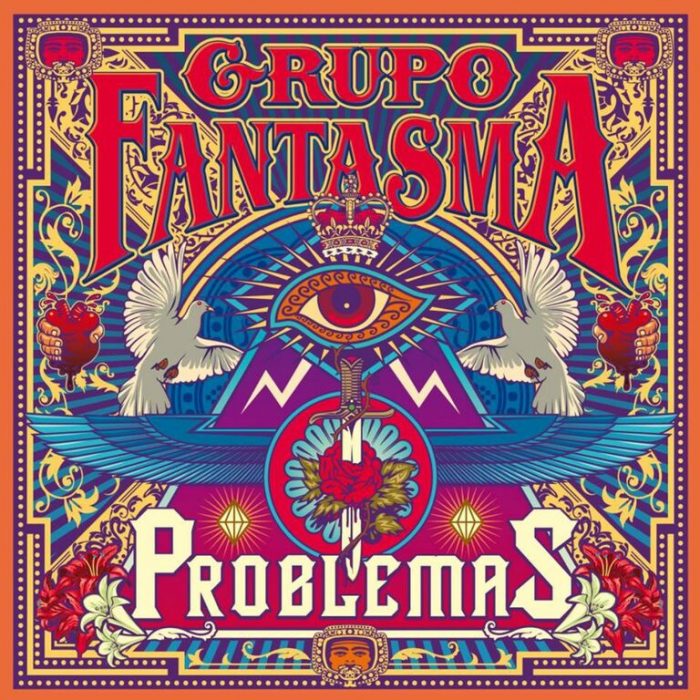 Thanks to its proximity to Mexico, Texas has been home to musicians who have recorded in Spanish for many decades now. Naturally, this tejano music has been strongly influenced by Mexican forms like ranchera and corridos.

That is not so for Austin’s Grupo Fantasma, whose strongest influences on the recent Problemas, like salsa and cumbia, have a strong flavour of the Caribbean basin. But the distorted guitar that starts the first track, “Nada” makes it clear that rock music, with a bit of a ‘retro’ spirit, also figures strongly among the band’s influences. In fact, the third track, “Porque” is a bolero-influenced reimagining of the Beatles’ “Because” and Grupo Fantasma manage a pretty nice blend of Latin percussion and the kind of vocal harmonies associated with those famous Liverpudlians. [Retro in maybe not so nice a way are the lyrics for “Esa Negra,” but of course I’ll have to allow that songs of lusting after dark-skinned women have a long tradition in the Latin American songbook.]

While the guitar and percussion are formidable, I’ve yet to mention the most powerful weapon in the band’s arsenal: the horn section. The horns on “Descarga Pura y Dura,” for example, blaze so powerfully and fluidly you might think they’ve time-travelled from 1950s Cuba. The horns and guitar at the beginning of the final song, “That Night,” makes me think of nothing so much as 1960s Memphis. Retro is not all these guys do – “Solo un Sueño” features a bit of a hip-hop flavour – but it’s what they do the most, and they do it well.

I imagine the album’s strong cumbia influence – “Otoño” is a killer example of this, by the way – owes something to its explosion in the last five to ten years throughout Latin America, rather than to its origins on the Caribbean coast of Colombia. These guys have been around for 15 years, and Problemas shows a group of old pros in fine form.

Problemas is available from Amazon UK, Amazon US and iTunes