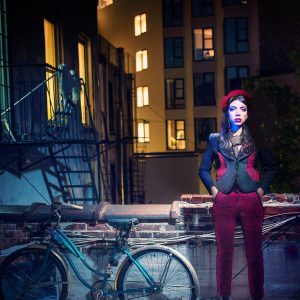 Review Hurray for the Riff Raff – The Navigator

Hurray for the Riff Raff is a project so strongly centred around the voice, vision, and personality of one person—Alynda Lee Segarra—that it is difficult to decide whether to use a plural pronoun, ‘they’, as you might use in writing about a band, or a singular ‘she’. Given the deeply personal nature of the latest Hurray for the Riff Raff album, The Navigator, ‘she’ seems the only appropriate usage. You’d have a hard time finding an album so deeply connected to a person’s identity as this one is to Segarra’s.

Almost all the material written about Hurray for the Riff Raff mentions Segarra’s Puerto Rican heritage, and her reflections on Boricua identity are the central focus on The Navigator. And with a good portion of the American public having rejected—arguably, at least—multiculturalism in the last presidential election, this is the story of a past that is painfully alive. (Listeners in Great Britain, France, Holland and elsewhere witnessing similar rejections can surely relate, given the rise of ethno-nationalist backlash in their own countries.) “Now all the politicians, they just squawk their mouths/We’ll build a wall to keep them out,” Segarra sings on “Rican Beach,” which is perhaps the centrepiece of the album. Although Segarra’s own life experiences and the present political context are the most obvious points of reference, I cannot help but wonder if the album’s title, The Navigator, hints at an older history that is hemispheric rather than national.

The album begins with a piece called “Entrance” that sounds like a spiritual recorded decades ago (the presence of Segarra’s voice, however, betrays the song’s recent vintage) that speaks of “a navigator for my Lord.” But a connection of “The Navigator” and Puerto Rico makes me think of a more secular—and to some, profane—figure, Christopher Columbus, who landed on the island on his second voyage in 1493. The powerful mixture of the image of “The Navigator,” a traditional African American song form, and reflections on growing up multicultural in a country that often seems hostile to its own diversity produces a portrait of conquest and defiance. “You can take my life, but don’t take my home,” states another line of “Rican Beach.” More positively, it is also a story of survival, most clearly in “Pa’lante,” in which Segarra recognizes the sacrifices of “all those who came before.” (“From el barrio to Arecibo.”)

While the lyrical content of The Navigator might not be completely intelligible without some knowledge of Latin America and the experiences of Latin Americans in the United States, listeners expecting an album deeply rooted in Puerto Rican music might also be disappointed. Songs like “The Navigator,” “Rican Beach,” and the finale are very clearly informed by Caribbean styles, but generally the greatest point of departure from Hurray for the Riff’s previous album, Small Town Heroes, is that the songs tend to be louder, bolder, and more electrified. One of the lead singles from The Navigator, “Hungry Ghost” reminds me of Arcade Fire, truth be told. Musically, this is an album that should find a warm welcome from more adventurous fans of Americana (and The Navigator is Americana in the very broadest sense of the term) and indie rock, but as a cultural and intellectual document, it should appeal to anybody concerned with the past and present of America, both North and South.

The Navigator is released by ATO Records and available from iTunes, Amazon UK, Amazon US and Bandcamp.