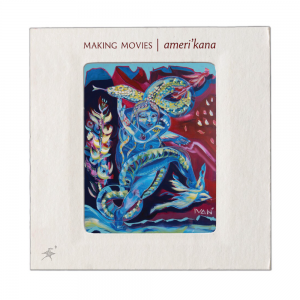 Making Movies have released their latest album Ameri’kana calling for more awareness of the importance of Latin culture in America. Rather than follow recent tendencies to merge international pop music, they stand by their independence as a rock band that invigorates the sounds of their Latin roots with contributors as legendary as Ruben Blades to help them along the way.

Ameri’kana evokes the idea of how borders have become the root of both social and individual conflict:

“The world doesn’t know where a country starts nor where it ends that’s why this song is dedicated to all of you who have suffered because of all the borders we’ve created in the world”, is the opening statement to the album.

NPR’s recent interview discussing Ameri’kana with both Ruben Blades and Enrique Chi made it clear that as artists with immigration-tinted backgrounds, they possess a clear responsibility regarding the current state of affairs in America: make the right questions necessary for social change and do so unapologetically.

The theme underlying the album is to make amends with the emotional fracturing that borders imply. The narrative element used to do so is the sound of a radio station being synched through interruptions of static; radio “Ameri’kana: the station between stations.” It’s a slogan that portrays the idea of borderless genres, a philosophy that sets the band as the ‘in-betweeners’ amongst other radio stations. Of course, once synched, the first sound to be heard is a trumpeting salsa.

As expected, Latin-rooted colors paint each and every one of the songs of the album. And as if the bombastic trumpets and exquisite percussion weren’t enough, several of the tracks are beautified by notable artists belonging to Making Movies’ kin. To say ‘notable’ is rather humble, considering that the collaborations are with Grammy-winning artists Ruben Blades and Flor de Toloache, amongst other fellow artist-activists.

“Como Perdonar”, the album opener, is an inquiry for forgiveness, a forgiveness which would extinguish the emotional burning caused by division at the border. The chorus is buoyed by Flor de Toloache’s yearning croon and Ruben Blades’ lower warble. Later on is “Delilah”, a song that deals with a conflicted idea of America as the promised land, as opposed to the experience of the promised land itself.

“Rebelión” is a rock-like take on a famous Joe Arroyo super-hit. It’s a tribute that honors the musical resilience of the original, not only in its memorable melodies but for the story it conveys. Further on is “No Te Calles”, the piece referred to by Blades in the NPR interview as a challenge against despair brought by things not changing. It´s a defiant call to action to trust in the people’s will for justice. Last but not least is “Tormenta“ with a special contribution by Las Cafeteras, a song that expresses the nostalgia one might feel when apart from loved ones and the unbearable uncertainty the feeds such a feeling. Violins and synthesizers provide the song with a tinge of a dream-like, longing sensation.

Making Movies counter the idea of America solely as North America and try to understand it as a continent rich in ethnic influences. Each of which conveys, musically, the idea of borderless genre lines. The band is able to sonically bring together this concept, not only in the range of their musical influences but also through their fluent bilingual comprehension of culture itself.