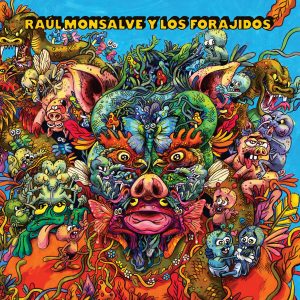 Regular visitors to this site may remember Ellen Gordon’s interview with Raúl Monsalve prior to the band’s appearance at the Meltdown Festival five years ago. Three years later, Raul was the bass player with the Paris-based Venezuelan group, Insólito Universo, whose La Candela del Río was voted #25 in Sounds and Colours’ pop-tastic Best Albums of 2018. So this musician, student and teacher of music, who divides his time between Paris and his native Venezuela, has plenty of “previous”. Los Forajidos, in fact, have been around since 2007. Although “the band is changing all the time”, apparently every time that Monsalve goes back home, its focus remains fixed on the interplay between indigenous Afro-Venezuelan rhythms, funk, Afrobeat and Latin jazz. With Malcolm Catto back at the controls, the Heliocentric production techniques that we have come to know and love add an extra dimension to the band’s raw power on this diverse new album.

There’s a certain visceral anger to be heard at times and the word bichos denotes a nasty piece of work in Spanish: the kind of people represented on the album by a roster of insects and animals – the mosquito, the flea, the pig, the snake and the rooster – that stand for greed, hate, corruption and other beastly human characteristics that are helping to tear the world apart. On the other hand, the butterfly also features, as do more redemptive human qualities such as love, compassion and a capacity for friendship and collaboration. Such a mixture dictates a variety of musical moods. The glorious “La Mariposa” (butterfly), for example, with Monsalve on double bass on this occasion, is a joyous, skittish affair with flute and tenor sax twisting in and out of each other on the edge of free jazz, while the keyboard effects babble like a warm tropical pool on “Palo de Agua”. “Mosquito”, on the other hand, is a more ominous affair: riffing horns over guitar motifs and hyperactive percussion figures of afrobeat mirror a powerful call-and-response vocal led by guest, Betsayda Machado. Arguably, the best is left for last in the form of “Pa’ los Maestros”, a loose-limbed descarga brimming with superb percussion and suggesting Ray Barretto’s classic “Cocinado” as if played by the red-hot Colombian group, La Mambanegra.

The leader’s bass is heard to particularly good effect on “La Pulga”, pushing things along with some insistent percussion beneath the dominant keyboards and soukous-style guitar. It’s subtle but hypnotic and compelling, representative really of an album that delivers almost as much as it promises for the future. This is a band that’s definitely one to watch.

Bichos is out now on Olindo Records