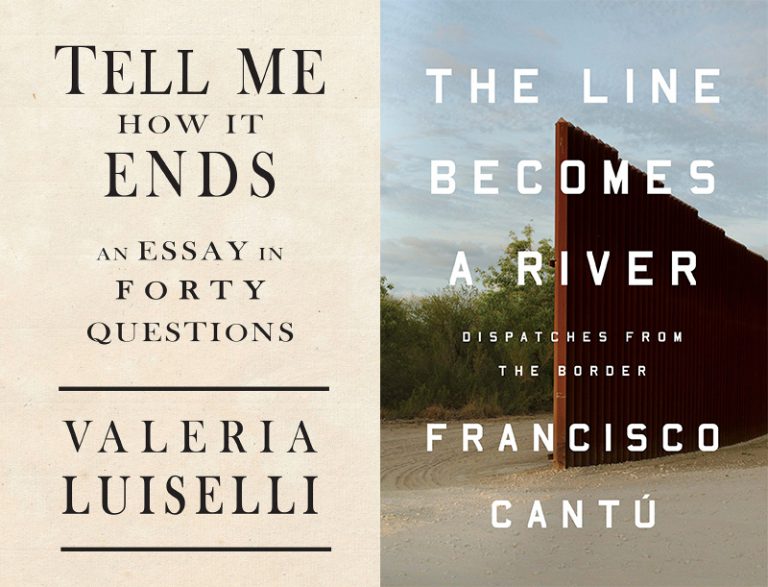 The Border Guard and the Immigration Court Volunteer: Different Literary Perspectives on the US-Mexico Border

Francisco Cantú’s The Line Becomes a River and Valeria Luiselli’s Tell Me How it Ends bring us closer to the reality of the US-Mexico border and the children and adults who cross it.

We are all familiar with the language of ‘surges’ and ‘crises’ in reporting on migration to the US via the US-Mexico border. More than 76,000 people illegally crossed the border in February 2019: the biggest month for apprehensions at the border since April 2008. Cantú and Luiselli bring new perspectives behind the overwhelming numbers.

In The Line Becomes a River, Cantú documents his life as a US Border Patrol agent between 2008 and 2012. Luiselli’s book, Tell Me How it Ends, is the result of her experience as a volunteer interpreter at the federal immigration court in New York in 2015: a period when the justice system was under intense pressure to process the cases of the 102,000 unaccompanied children detained at the Mexican border between 2014 and 2015.

Cantú gives an insight into the work of Border Patrol agents and their often macho, aggressive working culture. He shares details of the harrowing experiences of migrants who make it to the border, as well as those who die en route. Unsettling dream-like passages hint at the psychological strain this work takes on Cantú.

Luiselli’s perspective shows what happens after child migrants cross borders: “not the emergency at the border, detonated with the surge of arrivals, but the quieter, more bureaucratic, legal emergency”. As an interpreter, she tries to make a narrative out of the answers children give to the questions in the form she completes for them during their immigration screenings. She describes the “frustrating and bewildering” process of building up a “snapshot of a life”, searching for key, often traumatic, information that might secure them legal representation and consequently a chance to stay in the USA.

Both writers are motivated to look to their own personal relationships with the border, as a Mexican (Luiselli) or the descendant of Mexican immigrants (Cantú). Luiselli questions her guilt at being from a country where migrants suffer rape, abduction, death and disappearances on their way to the US: accounts of these experiences appear in Cantú’s book.

Against the backdrop of black-and-white border wall politics, these books provide a useful reminder of the fluidity of the US-Mexico border. Cantú’s book’s title alludes to the changing history of the boundary line between the two countries, where the border line can be changed simply by “the whims of a river”. Cantú’s writing often switches between Spanish and English imperceptibly, with no separating punctuation: perhaps this a textual reminder that languages don’t recognise borders. Luiselli references this fluidity by suggesting that the experience of crossing a border never truly comes to an end, quoting from the ‘immigrant’s prayer’: “Llegar nunca es llegar / To arrive is never to arrive”. She also describes the “shared accountability” that all Central and North American countries have in the roots and causes of child migration.

The Line Becomes a River and Tell Me How it Ends make for haunting reading. Cantú and Luiselli’s writing is poetic and engaging: sometimes scary and sad, at other times darkly funny (for example, Luiselli comments that dead migrants can get their “permanent residence” in Mexico).

These writers infect the readers with their own curiosity as they carefully detail the stories of the individuals they meet, each with their own unique motivations for migration. Cantú recognises the weight of the responsibility of his task of getting behind the migration statistics, “to account for all the ways that violence rips and ripples through a society”.

Luiselli writes that her daughter often asks her ‘how does the story of those children end?’. But she admits to her daughter that she can’t predict an end to the stories she hears: “while the story continues, the only thing to do is tell it over and over again.” Thanks to these two books, readers are provided with two new perspectives on an ever-repeated story.

Francisco Cantú’s The Line Becomes a River and Valeria Luiselli’s Tell Me How it Ends are both published by Penguin Random House.