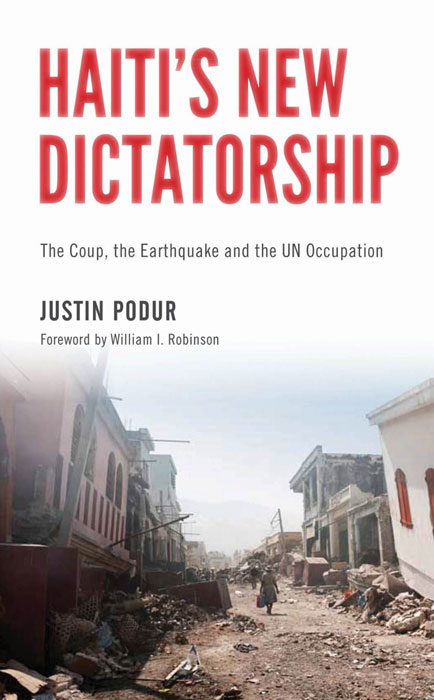 Haiti’s New Dictatorship: The Coup, The Earthquake and The UN Occupation

Justin Podur’s Haiti’s New Dictatorship: The Coup, the Earthquake and the UN Occupation is a well-argued critique of how this nation has been consistently undermined from within and without by the benighted collusion of the local elite, geopolitical contingencies (orchestrated largely but not exclusively by the US) and latterly through the role of NGOs and the UN Stabilisation Mission in Haiti (MINUSTAH – 2004 to date).

The book focuses on the governments of President Jean-Bertrand Aristide (1990-1991, 1994-1996 and 2001-2004), the coups that interrupted his first and second terms, the various political interregna administrations (under General Raoul of the Cédras Forces Armées d’Haïti [FADH], Joseph Nérette, Marc Bazin, Gérard Latortue, René Préval and Boniface Alexandre) and culminates on the “cooked” election of 2010-2011, which produced the present incumbent Michel Martelly.

Haiti was born in chains – and as Podur describes in a short historical introduction – it not only bears the scars, it continues to be tagged 209 years after winning independence from France. The methods are different but no less pernicious: geopolitical meddling, entrenched vested interests, misguided UN policies and the agenda of global carpetbaggers. Add in a supine media and self-serving NGOs and you’ve got the set.

The core argument of the piece concerns the subverting of the democratically elected Aristide and the summary undermining of Haitian sovereignty. This story’s subject is the mother lode – a rich vein of irony, hypocrisy, mendacity and doublespeak. Let’s get things straight here. Aristide is one of the very few politicians in Haiti’s history who could ever be described as “popular” in the true sense of the word – electorally, politically and personally. What’s more in his short tenure in power he did more to advance health, working conditions (including a minimum wage) and education (he built more schools in that period than in the rest of the country’s history combined) than any of his predecessors. Guess what? That’s why he was popular.

By Haitian standards he was a maverick. Most Haitian politicians, as Podur explains, need guns, machetes and gangs to get the finer points across. Aristide’s Lavalas/Fanmi Lavalas movement was a grassroots organisation favoured by the poor (i.e. the vast majority). Who can forget Papa Doc Duvalier or his son, Baby Doc Duvalier and the dreaded Tonton Macoutes? Haiti was always less 99% catholic and 100% voodoo than 99% vassals and 1% hoodlums.

The typical Haitian politician cements his political credentials in a blood sacrifice of his opponents, yet in 1991 and 2004, a politician without blood on his hands, accounts in Miami and Switzerland or an international property portfolio (despite the best efforts of the propaganda machine to prove otherwise), was deposed – deemed too corrupt and anti-democratic to be allowed to stay in power. Yet in the elections of 1991 and 2001, Aristide won with 67% and 91.7% of the vote, respectively. This is not a question of right or left, it’s a question of whether popular sovereignty actually means anything. It is as basic as that. Haiti, regrettably, has never had the opportunity to develop the plurality, the separation of powers (executive, legislature and judiciary) or an independent media without other agencies queering the pitch. Nor will it, as Podur concludes, as long as Haitians have no say over the political, economic and social development of their own country.

So, yet again, Haiti is a state governed by a president with a massaged mandate (courtesy of electoral fraud and gerrymandering) and a state apparatus geared to coercion rather than consensus. Meanwhile, local NGOs and foreign corporations benefit from the aid and loans that were denied to Aristide. The Haitian population – 9.7m – remains destitute, unemployed (80%), repressed and marginalised. Podur recounts that the accumulated rubble from the earthquake (2010) still hasn’t been cleared three years after the event despite millions being paid to private contractors. What could have provided gainful employment to an army of unemployed labour – and a vital boost to the local economy and populous – was instead frittered away at great cost and to no obvious effect.

Dom Hélder Câmara, the now deceased Archbishop of Olinda and Recife, Brazil once said: “When I give food to the poor, they call me a saint. When I ask why they are poor, they call me a communist.” This was Aristide’s position in a nutshell: too close to the people; too far from the interests of the Haitian elite and too divergent from the US-led agenda. As Podur suggests, the opposition couldn’t win an election unless somebody else’s life depended on it – which it usually did. There was the dilemma: how do the UN, US, Canada, France, Brazil and others present their democratic credentials in a situation where they’ve squeezed out the only genuine representative in favour of gun-toting and machete wielding thugs in the pay of local and foreign agencies? When you factor in MINUSTAH collaborating with the Police Nationale d’Haïti (PNH) in the slums of Cité Soleil, Bel Air and Gonaives, it is difficult not to conclude that truth has become travesty.

Podur, using Canadian and other research, is particularly critical of a global media fed on a convenient loop of stories which all seemed to emanate from the same sources, frequently local and international NGOs. The hymn sheet lyrics, whether from the US (New York Times, Miami Herald and Washington Post etc.) or Canada (Globe & Mail or National Post) miraculously arrived at the same conclusions at the same time. Any dissenting voices or volte-face reports usually came too late to have any influence on events; a kind of conscience-salving exercise to put the record straight. This is nothing new, though, as Michael Herr’s Dispatches revealed about coverage of Vietnam. When some journalists were getting copy from the drop zone others were staging a suicidal frontal assault on the cocktail bar of the nearest luxury hotel.

Podur concludes that whether Aristide was any good as a president is arguable. What’s less debatable are questions about his mandate (in elections deemed fair by all who oversaw them), his democratic credentials (share of the popular vote) or relativistic discussions of his integrity (any infractions committed under his presidency compared with the Haitian “norm”).

Haiti isn’t the easiest place to run a fully-functioning democracy – it has little tradition and too many entrenched impediments – internal and external – but Podur notes that the Aristide administrations made a better fist of it than any of their predecessors or successors.