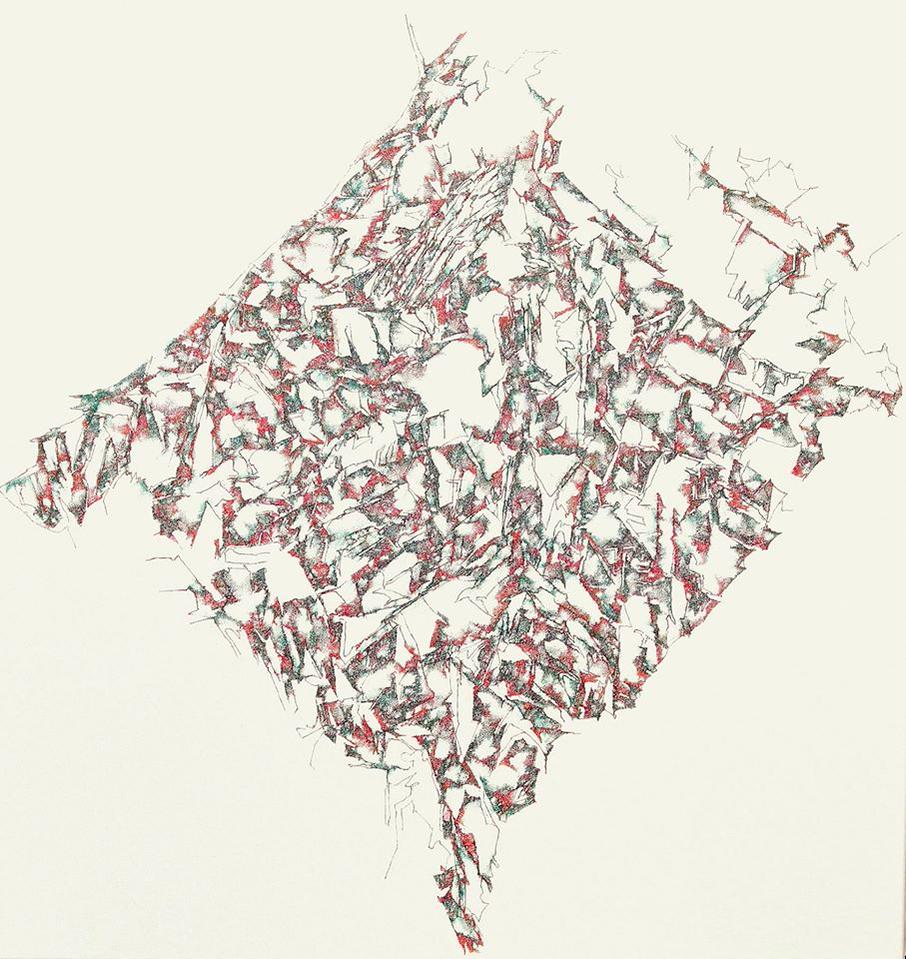 After a visit to the Mayan sites of Yucatan in Mexico, Guatemala and Belize in 1977, Jeanne Masoero became inspired by the landscape surrounding her. The journey became a process of discovery, a process in which the destination was only in the back of her mind and the real star was, in fact, the act of travelling.

Jeanne says her love for cartography has been in her life since childhood, and after leaving the Slade School of Art she drew maps at an Architecture and Town Planning office. I must confess that this piece of information was essential for me to completely capture what she was trying to represent in her paintings.

Once I walked into Sandra Higgins’ home gallery in London, I was faced with a few of Jeanne’s works mounted on a plain white wall, illuminated by the summer sunshine coming through the balcony window. My curiosity drew me towards the paintings, in the hope I would figure out what it was about those paintings that would represent the lost Mayan culture. The closer I got, the more I noticed the tiny details encompassing her work. A simple technique I had never seen before, but at the same time displaying an enormous amount of painstaking patience and artistic vision. Tiny markings, done with often no more than 3 different colours, creating depth in the most intricate way possible.

Working on a white background, Jeanne allows the canvas to illuminate itself. The white shines through the colours creating a radiating glow, shining through the negative spaces and making the colours even brighter.

Then something truly magical happened. As soon as I stepped back again and observed the initially convoluted images, I saw her passion for maps and I saw the valleys, the hills and the zigzags of riverbeds. Unnamed, non-existent locations, being brought into the real world by the fantastic relief of Central and South America.

Italo Calvino’s Invisible Cities also inspired Jeanne to name her creations as something new and innovative; made-up names that in a way describes the set up of the city she created. For example, the “Spiderweb City” (seen below) is described by the artist as “a full-size city, enclosed within the earlier city: a city that forces its way ahead in the earliest city and presses it toward the outside. Spider webs of intricate relationships seeking a form”. 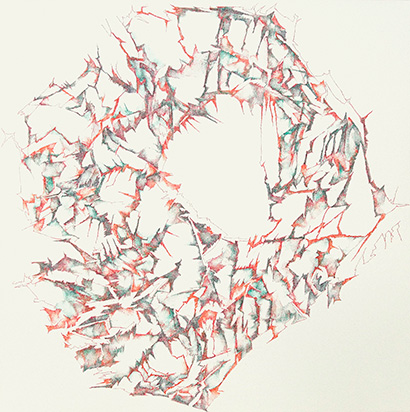 On exhibition also are Masoero’s relief sculptures, valleys created by careful layering of paper on canvas. They allow you to experience the three-dimensional experience of the canvasses from a different angle. Carefully chosen, Sandra Higgins has created an exhibition in which each element completes the other and adds to the overall picture, allowing you to leave thinking you’ve experienced the Mayan ruins and their surroundings yourself.

The exhibition is happening at Sandra Higgins Fine Art gallery in Chelsea until the 1st July – no entry fees. Open to the public by appointment through email: [email protected] or phone: 07721741107.