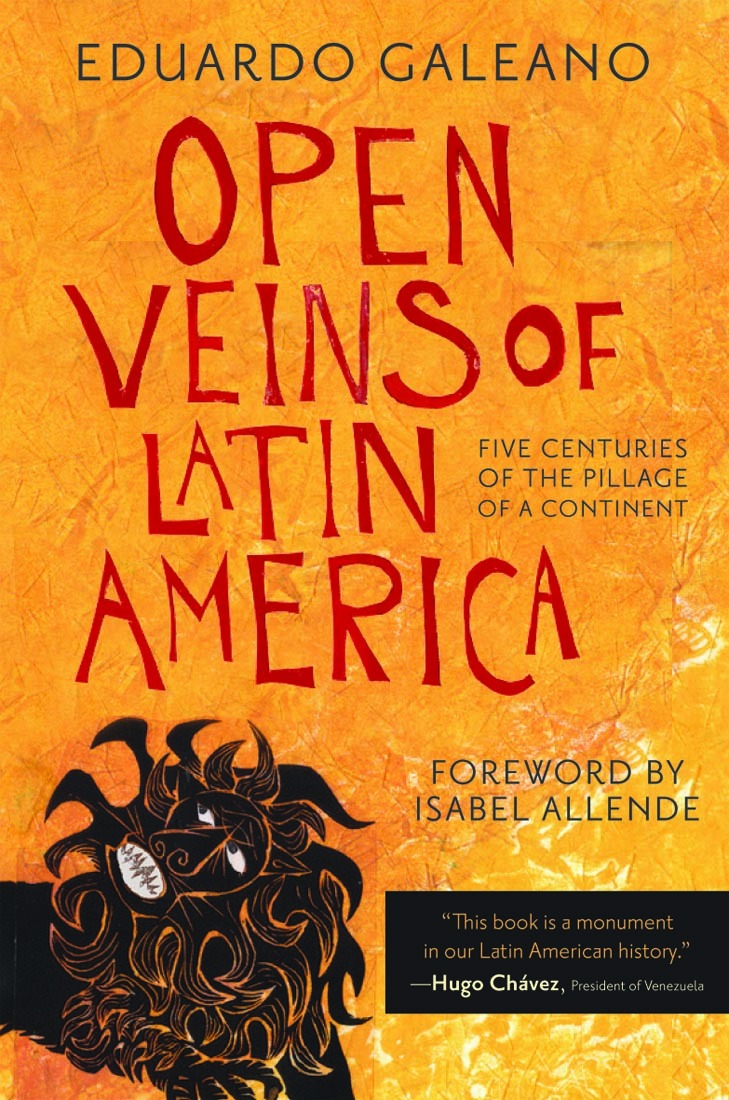 Imagine: a proud lion has been chased, shot and trapped by poachers who descended heavy-footed upon his land. The poachers are winged and foreign to the lion’s land, as well as dispassionate, or passionate only to wealth’s nefarious whispers. The lion does not and will never capitulate, yet blood flows from bullet-hole wounds. It is this feeling that Eduardo Galeano’s book Open Veins of Latin America: Five Centuries of the Pillage of a Continent embodies: one of anger; of arbitrary and wrongful pillage; a feeling of death that is prolonged and surgical in its keeping the patient alive for as long as the matter dictates; of a raping of beauty, pride and hope.

First published in 1971, Galeano’s book forms an understanding of the history of Latin America since 1492 when Spanish ships first slipped into Bahamas’ waters. Galeano asserts that the present can only be understood as a product of the past, the bastard result of an equation whose elements were spurious numbers dictated and manipulated, not by the capricious whims of the gods, but rather by the enthroned kings and queens of foreign enterprises. As Galeano writes: “The international division of labor was not organized by the Holy Ghost but by men – more precisely, as a result of the world development of capitalism.” The IBMs and General Motors of Galeano’s contemporary era can be traced back to the likes of Hernán Cortés, the sugar plantations of the Portuguese and the chains around the slaves’ feet and neck as they were hauled across the oceans – a thread can be tugged and ripples will worm their up the fabric; pull too hard, or remove the thread all together, and who knows if the structural integrity of the weaving will hold up.

The book is written in chronological order, with the first one hundred and thirty pages being dedicated to setting the scene of the pre-1970s era, although frequent mentions are made of contemporary situations which were born of the unsolicited impregnation of earlier years.

Galeano writes that travellers came to Latin America in search of wealth to be exploited during their “era[s] of conquest” – Christopher Columbus arrived with The Travels of Marco Polo in hand, thinking Latin America to be Zipango, Japan and therefore a land of “mountains of gold and pearls and twelve kinds of spices in enormous quantities”. Galeano’s seemingly infinite pool of knowledge is, especially in this historical part of the book, explored. He effortlessly jumps between regions, over mountains and rivers, to detail each prominent step in the development of Latin America’s underdevelopment. His rapid movement between situations is not due to incoherency or a lack of focus; rather, a desire to capture all that went into Latin America’s history. Indeed, this pan-Latin American approach proves useful in that the reader is forced to see the immensity of the pillage which was enacted by the Spaniards, Portuguese and British (and French, Dutch and Germans).

One of the more emotive themes that runs through the earlier parts of the book is that of the paradoxical poverty associated with natural resource wealth. In many moments, Galeano bemoans such abundance because of the devastation it caused: “The Indians have suffered, and continue to suffer, the curse of their own wealth; that is the drama of all Latin America.” Founded around the huge natural deposits discovered, such as those of silver at Potosi and black-gold in Minas Gerais, Spanish and Portuguese cities within Latin America would extract the resources to ports and then ship these back to their respective countries; only that the wealth was neither for Spain nor Portugal. These countries owed money to other, more opulent, (more successful), European states: Latin America was the bank, emptied by Europe. This relationship, like so many which are based on primary resource extraction, bred a chain of dependence and inequality, reproduced on each level funded using Latin American resources (blood, sweat, gold and silver). But, stars do not shine for an eternity. They will die, regardless of our inability to initially perceive this slow motion explosion. Mines run dry and cities, and their poor, decrepit citizens, are left to waste away: “Only ghosts of the old wealth haunt Potosi.”

The latter half of the book deals with the contemporary era in which Galeano is writing. Although the methods of extraction have changed (albeit not in every situation), the actors and the repercussions are the same. The main element of Galeano’s embittered anger is the United States which, he writes, has hijacked the name ‘America’: “For the world today, America is just the United States; the region we inhabit is a sub-America, a second-class America of nebulous identity.” A vein that runs through these parts of the book is a discussion of free trade, as promoted by the United States and various inter/supra-national institutions such as the World Bank and the International Monetary Fund. Galeano asserts that free trade is only promoted by those powers that are sure their economies will not be adversely impacted: “[…] But free trade only became revealed truth for them after they became sure of being the strongest power.” Protectionism, on the other hand, Galeano seems to equate with national unity – but protectionism is dismantled, tariff by tariff, through conditions directly tied to loans that are delivered by the institutions mentioned above.

It is here that, for me, the book becomes difficult to read. This could be because of my limited experience with the economic specifics that Galeano was discussing, such as loan repayments, credits, inflation rates, stocks and the trading of foreign currency. Perhaps Galeano’s dense writing in this segment can be understood as a result of his passionate, fuming, venting anger. Whoever is able to remain consistently clear and concise whilst also red-faced and white-fisted angry is certainly deserving of praise.

The other element Galeano discusses in this second half of the book is the intervention of foreign governments in Latin American politics. Personally, this part angers me the most. Foreign interventions helped kill Latin Americans. As quoted by Galeano, Lincoln Gordon, the U.S. ambassador to Brazil, admitted that the U.S. government had long funded forces opposing various governments: “What the hell, that was more or less a habit in those days.” Those funds, which were spent against governments the U.S. didn’t agree with, supported military regimes that were often responsible for extremely repressive policies, kidnappings, corruption and murders.

However, despite the grim subject of Galeano’s book – the subjugation of his homeland, the murder of his people and the pillage of his lands for 500 years – Galeano retains hope for the Latin American people. “Our solidarity”, Galeano seems to whisper in the turning of every page, “allows us to fight on.” Latin America is the fire blazing, or the samba drum-beat that echoes off Sugar Loaf Mountain, and will do so for eternity. Latin America is the deep-red passion one feels having travelled there. As sung by the Puerto Rican band Calle 13 Latin America is:
“un pueblo sin piernas pero que camina” (a people without legs that still walks on).

Open Veins of Latin America: Five Centuries of the Pillage of a Continent is available from Amazon