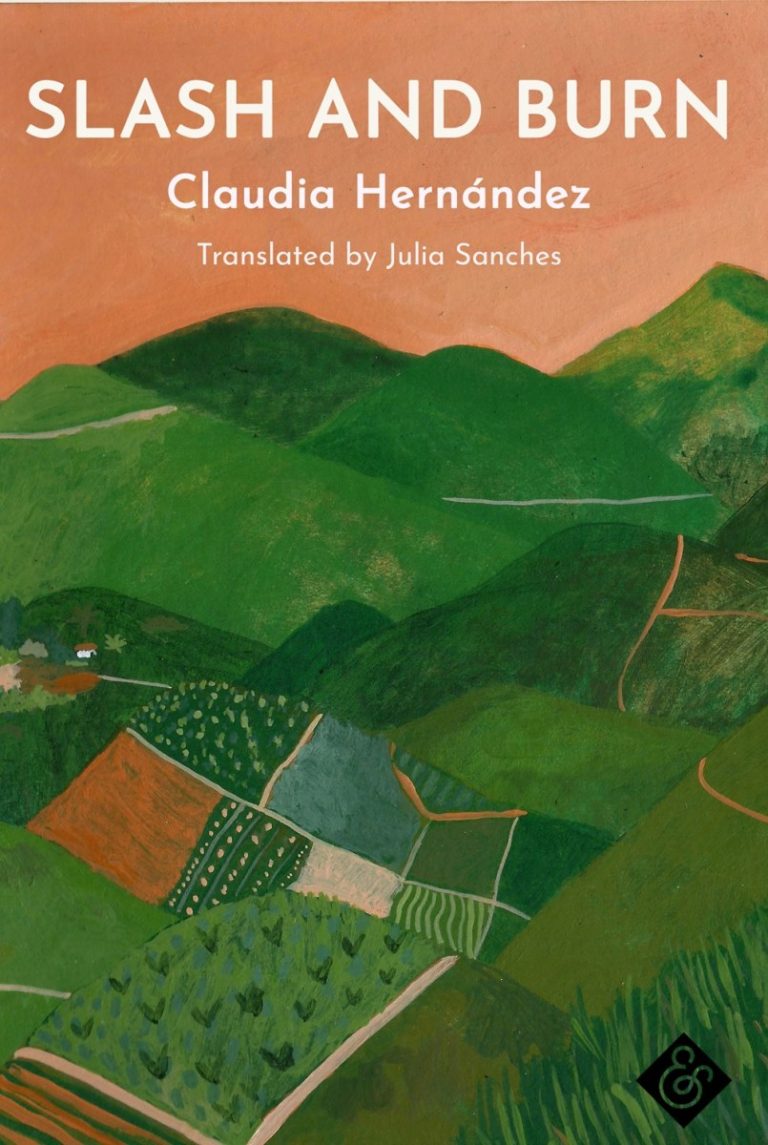 ‘Slash and Burn’ by Claudia Hernández: Exploring the Brutal Impact of the El Salvadorian Civil War

It is remarkable that I would emphatically describe Slash and Burn (Roza tumba quema) by Claudia Hernández, translated by Julia Sanches, as having a quiet and unobtrusive style, for a book that tells of a twelve-year-long civil war: principally, its aftermath and effects. Rape, murder, displacement, family separation, hardship, loneliness and trauma: the novel takes an incredible patchwork of all kinds of life difficulties, weaves the pieces together and wraps a cloak of these stories around the central voices of Slash and Burn: an ex-combatant mother and her four daughters. This is a book that uses indirect narration to create accounts that are both detailed and expansive, putting the personal first but speaking for the collective and from a more vulnerable part of society, really demonstrating the multi-layered meaning of being a survivor.

None of the characters or places in El Salvador are named using proper nouns. Slash and Burn is about a mother, who is also a woman who once fought in the hills after seeing her village sacked. She is a “single mom“: “She might not like the term, but she preferred it to widow. When they called her that, it made it sound like the man who’d died had left her financials in order“. Her first daughter was taken away from her immediately after she gave birth to her, and is brought up in Paris by an adoptive family. Paris is, in fact, the only place to be named at all in the entire novel. The pain of the mother trying to recover her “faraway daughter” or “her daughter nonetheless” is heartbreaking, and gives insight into the work of charities searching for lost children, disappeared during the internal conflict in El Salvador (1980-1992).

The mother’s second daughter, who we know for most of the story as the “daughter at university” is a girl who we see trying her hardest to progress her education while also being lost and burdened by financial strain and lack of security. The next daughter, the “third daughter raised by her side” goes through emotional conflict that both pushes and pulls her away from and towards her family. Her “littlest daughter” is the “most defenceless“: she is so described because she never lived in a camp, she was not conceived during the disarmament, and she did not grow up in the community when its residents still had regular defense training: “The poor girl hadn’t once heard the sound of gunfire.”

The book gives a relentless, softly-spoken but brutally honest account of the details of the woman and the girls’ struggles. I realised, for example, part-way through, that being an ex-combatant was something that could take over someone’s every action, and constant behaviour, including how they carry themselves years after the end of a conflict.

“Sometimes it was the way she stood which signaled that the woman in front of her in the smooth skirt and ruffled shirt was capable of firing a weapon or detonating an explosive. Other times, it was the lack of practice in handling money that gave them away.

Back then, it would’ve cost them their lives. The soldiers would have identified them in seconds and left them prone on the floor, a bullet in the back of the head. Which is why the woman used to mind every detail when, for whatever reason, she had to go down to the city.”

I watched as the book told how the daily, hourly, persistent difficulty to provide food, water, necessities and support for young girls played out. I thought about the cruelty of post-war bureaucracy when land was not distributed to the mother, when she had to go through multiple steps to try and reach Paris in search of her daughter, and when the process for identifying relatives’ bodies was explained. The book is packed with details causing realisation, observation and thought, making it not just a war story, but a story of lives impacted in a such a way they deserve the details to be considered. The stories also have the effect of showing all-encompassing, expansive struggles pushing at human boundaries, spilling over to multiple people, and stretching through time.

The translator’s note at the end of the book has some invaluable points. I liked that it was an afterword, because it seemed fitting that after you have experienced the indirect narration and expansive detail of Slash and Burn, you can then think about how the collective suffering narrative is presented. There are some interesting points here about the form, the language and translation of the novel. And there are also some historical details, or prompts so that you can go and have a look for articles about the civil war in El Salvador and its subsequent societal setup but you do this after you have first and foremost focussed on the lives of those living, breathing and struggling in the story. There is a lot to unpack in Slash and Burn, so just to be drawn in opens up the opportunity of experiencing a significant and profound way of storytelling.

Claudia Hernández is the highly acclaimed author of five short-story collections and two novels. Her work has been supported by the National Endowment for the Arts for its exploration of the brutal impact of the El Salvadorian Civil War. Slash and Burn was originally published in Spanish in 2017, and in English in 2021, translated by Julia Sanches and published by And Other Stories.

Slash and Burn is available to buy from Bookshop.org here.