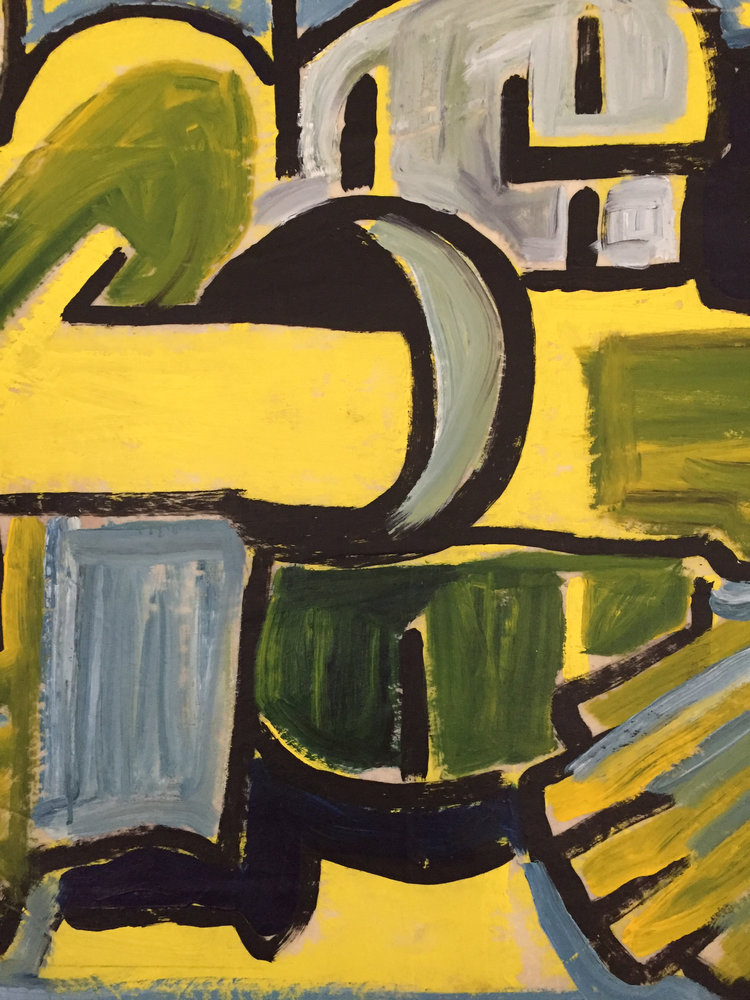 Against the Wall: A Political Critique by Pedro Rios Martinez

When I first met Pedro Rios Martinez I did not realise we would soon be engaged in a deep conversation on art, activism, politics, life and Vietnam. He had just finished a full day’s work installing a mural on a clinic in East Los Angeles under the sun’s full gaze. He spoke about his most recent 2017 art exhibition Against The Wall, and I was then invited over to his studio to see the series.

Martinez, of Mexican decent, was born in Stockton, California and raised in El Paso, Texas. Drafted into the Vietnam War in 1965 at nineteen years old, Martinez would find himself like thousands of others asking: would he be spared and sent back home or die in the wet and dense jungles of Vietnam? He was sure he would not survive. “Guess what?”, says Martinez, “I made it back home.” After surviving the war he asked himself the same question again, “why did I come home and others did not?” It became an existential question to find answers to alleviate his pain and much later his remorse. It would not be an easy transition for a young man to resettle and acclimate back into small town life in El Paso, Texas after the Vietnam experience with so many unanswered questions. 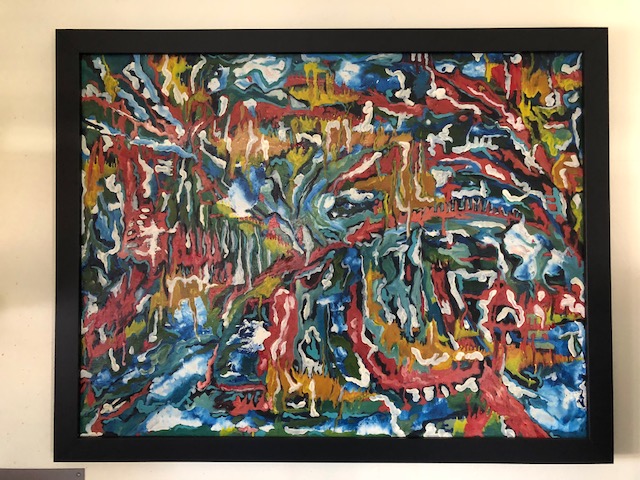 (from Against The Wall series)

After returning from Vietnam in 1967 he decided to go to El Paso Community college. It was here where he was introduced to painting at an art course taught by muralist and WWII veteran Ernesto Pedregon Martinez. Painting became a close friend of his that listened to his silent conversations as he started to paint on canvas. Martinez describes himself a self taught artist and appreciates the knowledge learned at Otis Parson Art Institute, Self Help Graphics and other centers for the arts. He attended the University of Texas and was the scenic artist for the Ballet and Opera Guild Theater at the university from 1973 to 1977. In Los Angeles, Martinez received an AA Degree from East Los Angeles College.

Martinez emphasizes the role of art in his life, “Art and music saved my life. Everything to art was secondary, problems, anxieties whatever, [it] took second place to art.” He was constantly travelling between El Paso and Los Angeles. This would be the beginning of other activities that would bring him to East Los Angeles, a predominantly Mexican American community. Coming from El Paso in the late 1970s, he encountered the Chicano Movement and its civil protest for equality and justice. Unfamiliar with the term Chicano as a self defining political-social term that identified the Mexican American experience in the Southwest region of the United States, he was hesitant to immediately take it on as his own identity. Nevertheless he consolidated his support and solidarity with the many Chicano/as struggling to bring about change, dignity and opportunities to several communities throughout the City of Los Angeles. 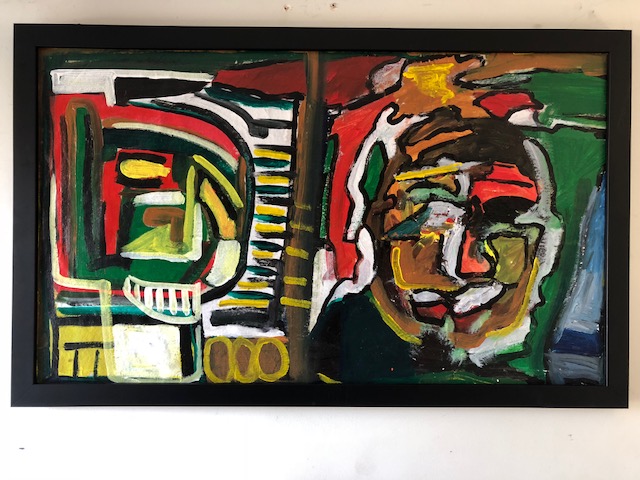 “Faces” (from Against The Wall)

In the 1980s Martinez became aware of one particularly political and cultural art center in East Los Angeles, Self Help Graphics, where he continued his apprentice in printmaking, serigraphs and other printing methods. In 2006 He was commissioned by the City of Los Angeles to sculpt a bronze sculpture of the first Latino official of the 20th century elected to serve on the Los Angeles City Council on July 1st, 1949, the late civil rights activist, Congressman Edward Roybal.

Against the Wall: The Exhibit

His first Solo exhibition after his return from El Paso, Texas came on August 13, 2017 at Tonalli Studios in East Los Angeles, California. Against The Wall brought several abstract canvases into a conversation on the immigrant experience in the United States. His abstracts are dense as a tropical jungle. The compact labyrinthine patterns in his paintings can almost appear to be desperate lines, scribbles and curves attempting to find a way out. Martinez emphasizes his approach in filling as much space as possible in his artwork as we pulled and stretched the mural onto the East Los Angeles clinic wall.

His work is a Mexican corrido (a Mexican vernacular song that tells stories of heroes, tragedies, struggles and challenges) which through paint and rugged lines he maps a landscape of hardship and uncertainty journeyed by thousands of one of the most deportable working class groups: Mexican and Central American immigrants. “They’re used and then sent back!” protesta Martinez. The traveled footprints invisible to the naked eye, Martinez compares the lost immigrant presence to rain, time, wind and weather, visible and alive. If an infrared invention could be set upon the soil and sand of Arizona, New Mexico and Texas to detect the prints, without a doubt like Martinez’s canvases, there would be absolutely no empty space left without any trace of human presence on those desert lands. 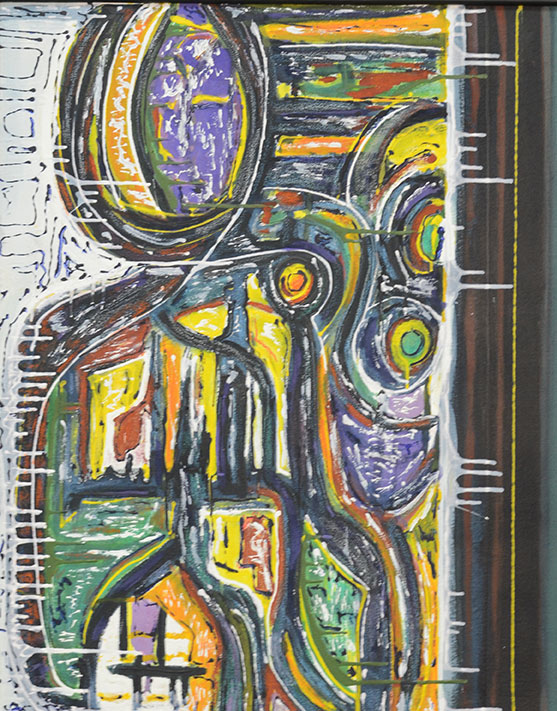 “The Wall” (from Against The Wall)

Other paintings in the exhibit consisted of tight grid patterns juxtaposed by squared off colors that look to be contained yet manage to inspire hope. One painting [above] gathers all possible colors with thick brushes of paint and stands them up against the wall pressing up and pushing back. There is a common variable between his Vietnam experience and that of an immigrant, hence the existing dichotomy in his series between the hunted and the hunter. Many immigrants have fallen victims to self appointed vigilantes and groups such as the minute men who hunt down immigrants. This is not to mention the constant ICE (Immigration and Customs Enforcement) roundups and threats by INS (Immigration and Naturalization Service) that immigrants face every day in the United States. The tensions between us against them in Martinez’s paintings manifest a deep divide that seeps through his canvas like a saturated bleeding bandage.

His adrenaline steered by his lived experience, his awareness of social injustices and discrimination make his layered crisscrossing patterns the driving force behind his fast improvising sweeping strokes. The meltdown dialogue to a humane solution for the Diasporas cannot better be expressed by Martinez’s dripping paint that runs throughout his work in protest against an infamous barrier, The Wall. 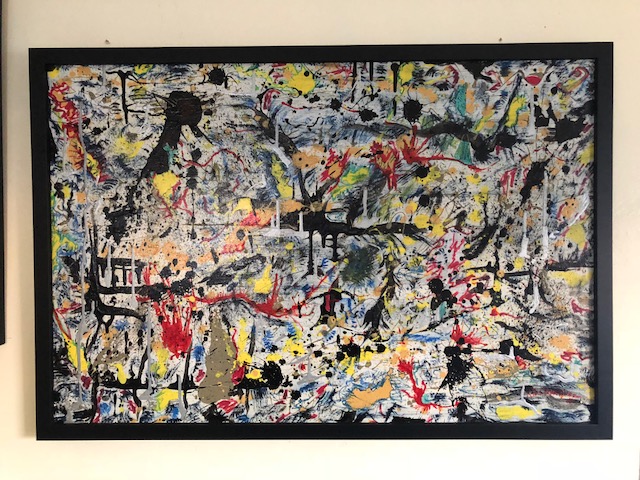 “Plata” (from Against The Wall)

He picks up all the historical, cultural, political, emotional and social fragments and aesthetically in his abstract language points to the global north’s undisclosed responsibility in creating the conditions economically through imperial programs like NAFTA (North America Free Trade Agreement), trade agreements between Canada, Mexico and United States and racist/usury policies that force thousands of young men and women from the global south, (World Wide) to seek sanctuary and opportunities in the very same countries that hunt, blame and rob immigrants of opportunities back home.

Against The Wall is a series that magnifies the static noise behind the ‘scapegoating’ by an insincere and insecure country (countries) dependant on the labor and the contributions of an immigrant community. Hence, the friction in the paintings is an intense insurgent critique of the modern western world’s unfriendly gaze towards non western societies.

The aura of his work lays not in the reduction of his work to style, technique or deconstructive arguments, but in the weight of the shadows that each of his paintings carry. The embedded protest and activism in this series is his grito (a yell) and that of many others for human dignity.

Find out more at pedroriosmartinez.com

All images are by Pedro Rios Martinez.