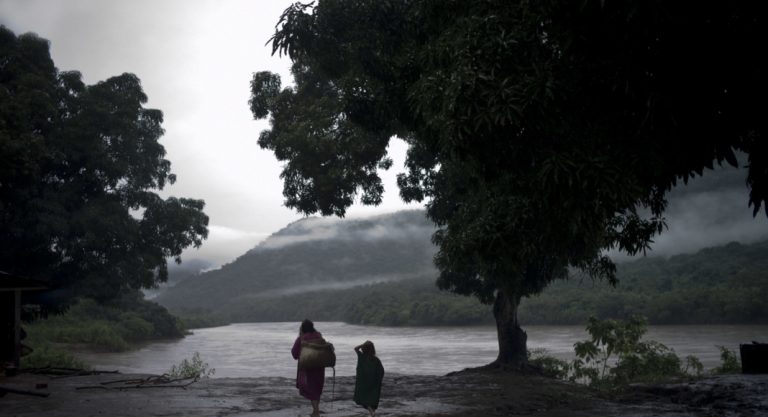 The Rights of Nature Movement

A recent report, published by the Cyrus R. Vance Centre for International Justice, Earth Law Centre and International Rivers has found that the movement to grant legal rights to rivers and the natural environment is rapidly gaining momentum around the world. The ‘Rights of Rivers’ report examines how the notion that rivers should possess fundamental rights is being adopted into law across the world, with a number of Latin American countries at the forefront of this initiative. You can read the full report here.

‘I was ecstatic, completely ecstatic,’ said Carlos Zorrilla, environmental activist and founder of DECOIN, a grassroots organisation that campaigns for the Conservation of the Intag Valley, located in Imbabura province, high up in northwest Ecuador. The reason for Zorrilla’s joy was the discovery by a group of biologists of two small amphibians, previously believed to be extinct, or on their way to extinction.

One of these amphibians, the Longnose Harlequin Frog (Atelopus Iongirotris), was believed to have become extinct in the 1980s due to the fatal combination of climate change and a fungal disease known as Chytridiomycosis. It was duly added to the long list of extinct species compiled by International Union for Conservation of Nature (IUCN). The second amphibian, known as the Confusing Rocket Frog (Ectopoglossus confusus) had also not been spotted for a number of years.

Zorrilla was delighted to find that the frogs were still extant, if perhaps precariously, but he also realised that their existence presented him with an excellent campaigning opportunity. The forested mountains they inhabit, known as cloud forests as they are constantly blanketed in thick fog, shelter a remarkable abundance of rare plants and animals. One of the most biologically diverse regions in the world, a study in 2018 found that they were 287 endangered species in the Intag area alone.

The discovery of these two frogs, which occurred in March 2016, gave DECOIN the perfect opportunity to campaign against the Llurimagua copper mining project, which is being jointly developed by two state companies – the Ecuadorian ENAMI (Empresa Nacional del Ecuador) and the Chilean Codelco (Corporación Nacional del Cobre de Chile) – in the Intag valley. Codelco is one of the world’s leading copper producers.

Llurimagua is an ambitious project. Ecuador’s deputy mining minister, Fernando Benalcázar, told the Mining Journal in early January that the company will be spending US$250 million over the next four year to assess the mine’s viability. If it goes ahead, Llurimagua could be producing 210,000 tonnes per year of copper for 27 years.

Mining activity uses water for mineral processing and contaminates water sources with heavy metal wastes. Environmental campaigners fear that this, together with deforestation, noise and dust disturbance, would mean that the Llurimagua mining project would put the Intag ecosystem in grave danger. It was for this reason that they were so delighted with the discovery of the two amphibians. Ecuador was the first country in the world to recognise the Rights of Nature in its constitution. Environmentalists were confident that the discovery of the frogs would provide them with a strong case to use these rights to challenge in court the planned mining activity.

And so it has proved.

In a crucial win for the Rights of Nature movement, on Thursday 24 September 2020, a judge at the Cotacachi Court ruled that the Ministry of the Environment had failed in its duty to protect species in the Llurimagua mining concession. The judge determined that, if in three months’ time the government is unable to show that it can adequately protect these species from extinction, the mining permits will be revoked.

While the government has said that it will appeal the decision, Zorrilla remains confident that their case is strong enough to take it all the way to the Supreme Court, and hopes that their success there will set a precedent for future cases in Ecuador and beyond. ‘It is the first ruling in Ecuador using specific endangered species as the principal argument under the Rights of Nature protection to stop a mining project. It will certainly not to be the last’, he said.

This is only the second time that a lower court in Ecuador has ruled so clearly in favour of the Rights of Nature. The case provides a very helpful legal precedent for the Los Cedros Reserve court case, which is currently being heard by Ecuador’s Constitutional Court.

Ecuador recognised the Rights of Nature in its national constitution in 2008, with the introduction of Articles 71 – 74, which declare:

Pachamama (Mother Earth), where life is reproduced and occurs, has the right to integral respect for its existence and for the maintenance and regeneration of its life cycles, structure, functions and evolutionary processes. (Article 71)

These articles were strongly influenced by Indigenous Quechua concepts, including Sumak Kawsay (Living Well), and were driven by the populist, anti-capitalist wave that brought socialist Rafael Correa to the presidency in 2007.

Rights of Nature is the idea that, just as humans, Nature is entitled to basic rights, defendable in a court of law. The Rights of Nature movement has ancient roots, arising from Indigenous traditions that have always treated humans and nature as indivisible, rather than distinct entities. The movement has emerged in the past 12 years in response to the failure of modern environmental law to adequately protect the natural environment and to address the current ecological crisis.

On the back of this movement, a coalition of environmental organisations, scientists, politicians and Indigenous leaders have formulated the Universal Declaration for the Rights of Rivers, which acknowledges the river as essential to the functioning of Earth’s water cycle, and thus to all life, and recognises the dependence of humans and other life forms on rivers. Endorsed by over 100 organisations across more than 20 countries, the declaration urges governments to declare that rivers are living entities that are entitled to fundamental rights and legal guardians.

Faced with the current ecological crisis, those leading the Rights of Rivers movement warn that transformative change is needed to save humanity and nature, and they suggest that a Rights of Nature approach can offer such a change. Along with countries such as India and New Zealand, Latin America is at the helm of this movement, and is setting an example for the rest of the world in its battle to enshrine these rights into law.

Bolivia has taken a similar approach to Ecuador. There the first Rights of Nature statute came into effect in 2010. The Law of the Rights of Mother Earth states the Pachamama is a dynamic living system with legal personality, and that it is considered sacred, according to the cosmovision of Indigenous original peoples and peasant communities. This law establishes the rights of Mother Earth to life, diversity of life, water, clean air, equilibrium, restoration and pollution-free living. The statute also declares that any Bolivian may bring a legal action on Nature’s behalf. A second law adopted in 2012 establishes an enforceable right to climate justice, which can be brought by victims of climate change who have been denied the right to Sumak Kawsay.

Although there have currently been no successful claims brought on Nature’s behalf, the Bolivian approach has strong support from the government, which has combined environmental stewardship with a postcolonial rejection of traditional capitalism. The country has also been instrumental in championing the Rights of Nature on an international scale, contributing to the development of the UN Harmony with Nature Programme.

Guardians of the River

While the Rights of Nature is not enshrined into the law in the same way as in Bolivia and Ecuador, there have been a number of landmark rulings in Colombia which have granted rivers legal protection. The first and most notable of these cases was in 2017, when the Constitutional Court of Colombia recognised the rights of the Atrato River, one of the largest rivers in the country, and home to many Indigenous and Afro-American communities. The case was brought by a group of NGOs who sought action due to the alleged loss of biodiversity due to extensive mining in the area.

After originally being dismissed, the case was successfully taken to appeal in the Colombian Constitutional Court, which found the pollution threatened rights to water, food, security, the healthy environment and the territory of the communities inhabiting the Atrato River basin. More radically, the court also ruled that the rights violated were not just those of the local communities but also of the river itself. The court declared the Atrato River to be an entity in its own right, moving away from a more anthropocentric approach.

The second case to be brought to court in Colombia was in April 2018, when a group of children argued that, over the course of their lifetimes, their health would be affected by rising temperatures due to climate change. They argued that the Colombian government’s commitment to combatting climate change and preventing the deforestation of the Amazon must be enforced by law. The case was taken to the Supreme Court, which endorsed the Rights of Nature as an extension of the ecocentric framework, which considers human beings as part of natural ecosystems. It ruled that, as human beings and their natural environment are morally indistinguishable, they must be given similar rights.

These landmark cases set the precedent for a number of other rulings that have granted rights to rivers in Colombia in recent years such as the Cauca, Magdalena and La Plata Rivers. The Colombian experience shows that Rights of Nature can be developed without clear direction from national or local legislators. Local and grassroots groups, such as young people and local communities, can go directly to court and demand the Rights of Nature be respected.

In light of these cases, in an address to the Global Alliance for the Rights of Nature, Ati Quigua, an Indigenous Colombian activist, environmentalist and politician belonging to the Arhuaco nations, spoke of the need to embed Indigenous cosmologies into the Colombian Constitution, to understand that there are multiple ways of inhabiting the world, and to revise the Western perspective that separates nature and culture.

Elsewhere, in Brazil, three municipalities (Paudalho, Bonito and Florianópolis) have included Rights of Nature provisions in their law to recognise ‘the right of nature to exist, thrive and evolve’ and to place an obligation of municipal governments to take steps to ensure that right is protected. A number of Rights of Nature cases in Brazil point to the possibility that Brazilian courts will follow the example of other Latin American courts in recognising the Rights of Nature in a range of contexts.

Rights of Nature cases in Latin America are gaining momentum and publicity, setting the precedent for other similar movements across the world. The success of these campaigns leaves environmental activists hopeful for the future, confident that the battle is not yet over.