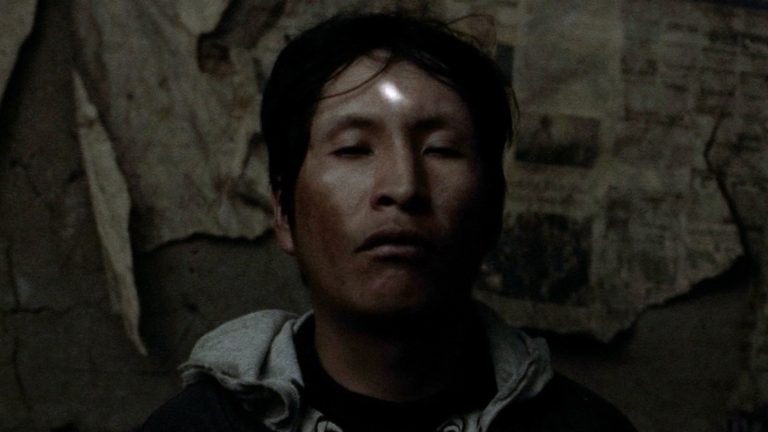 El Gran Movimiento (The Great Movement) is a lysergic and dizzying tour de force from one of Bolivia’s most promising film-makers. Veering between bleak realism and eerie supernaturalism, the film follows the wanderings of Elder (Julio César Ticona) and his two friends, ex-miners from the Huanuni mines, who arrive in La Paz to demand jobs. But all the while, a mysterious illness is ravaging Elder’s body, perhaps linked to the toxic dust he has ingested in the mines. A doctor who examines him is baffled, suggesting that his ailments may in fact be psychological. The harsh surroundings of the city make matters worse for Elder, and he laments “this environment is killing me”. Helped by a benevolent godmother, Elder finds himself visited by an enigmatic shaman, Max (Max Eduardo).

I spoke with director Kiro Russo about the film’s themes in more detail, and particularly its portrayal of work and alienation. The film alludes to the multidimensional burdens of labour, invoking the worker’s body as a site of exploitation under neoliberal capitalism. Russo explains that illness in the film is both literal – namely, the silicosis that slowly destroys the lungs of miners – and metaphorical. For the latter, Russo pinpoints capitalism as a kind of universal pathology which infects its local subjects in differing ways. Shots of Elder struggling to shift impossibly large bags of produce, women selling food at market stalls and an elderly construction worker demanding more money from an indifferent boss, all centre work and its degradations within the film. If Elder epitomises the alienated worker, Kiro adds “that’s why I chose the other character of Max [the Wizard]. For me he represents the opposite, which is the man that is outside of the system, and he’s trying to really see the scenes from the outside. That’s why we have these two characters precisely in the film.”

El Gran Movimiento builds on Kiro’s previous work Viejo Calavera (Dark Skull, 2016) which followed a young miner in the Huanuni tin mine, Bolivia. It offered a frank portrayal of the gruelling lives of miners, replete with swearing and alcohol, which similarly features prominently in El Gran Movimiento. As Kiro recounts: “[mining] is very, very harsh and tough work… Many of the friends that I had, have died since 2009. Fifteen people are dead now.” Beginning in earnest when the Spanish discovered the abundant silver reserves in Cerro Rico, Potosi in 1545, for centuries mining has relentlessly poisoned people, land and water in the Andes. It is estimated that eight million mine workers died in Cerro Rico alone, perishing through the effects of toxic pollution and brutal colonial labour regimes. Yet no other industry has the same colossal importance in the Bolivian national imaginary. Until the late twentieth century, the Bolivian miners union was probably the most powerful and tightly organised in the world; the Bolivian intellectual and Communist Party founder Sergio Almaraz once said that in Bolivia “the twentieth century arrived on the shoulders of tin mining.”

The backdrop to Elder’s odyssey is the sprawling, high-altitude city of La Paz. Yet rather than offering a linear narrative, the film is “more about the cinematographic experience through the city and through these characters.” Paceño-born and Buenos Aires trained Russo explains, “I realised that La Paz, was the third character, one of the main characters. And at the same time, I really wanted to do a dialogue with an ancient symphony of the city genre; the silent films of the beginning of the twentieth century. For me, what was very interesting to talk about was the decadence of modernity [as well as] the elements of post-modernity that I find very present in my country.” Russo cites the Edgar Allen Poe 1840 tale of The Man of the Crowd as a key inspiration, a story in which an unnamed narrator trails an elderly man obsessively through the crowded, smoggy streets of Victorian London.

This jostle between modernity and postmodernity plays out in the film’s disparate sense of space and time. Shots from within the teleférico (the cable car transport system) provide a restless, liminality, a sense that both viewers and characters are floating through the labyrinthine urban space. In one scene, cholitas [urban-Indigenous women] inexplicably dance to 80s synth music in a flash mob against the melancholy gloom of the streets. The juxtaposition of a shaman in a green wilderness, followed by insalubrious discotheques playing loud synth offer a peculiar and sometimes unsettling mix of temporalities which Russo sees as a defining feature of contemporary Bolivia, where local regionalisms converge with a globalised world of technology. “I wanted to do a film that can be a portrayal of all these different worlds of moving images together because I think we’re living in such a huge saturation of the image… Phones are like the substitute of the TV. It’s like a pocket TV where you can choose infinite channels.”

Kiro explains that he used long duration shots because he wanted “to do something that has to do with time and with traces of time. For example I shot the walls, the details of my city that for me are revealing of time. That’s related to the architecture of the city, but also related to the people and my friends, because for me it was an obsession to see them being themselves in front of the camera, as posters, as moments of time, of being there.”

He adds: “I consider myself a very formal film-maker. I want to really dive into the form of film-making. I’m very much about cinema as a very human language. When I say this, I’m talking about believing that beyond the narrative, beyond the actors, beyond the theatrical way of film-making, you can really archive something, you can give new experiences to the people through the cinematic graphical experience itself.”

As a film borne of collective labour, in El Gran Movimiento most of the characters are portrayed by non-actors. Kiro explains that he cultivates long term relationships with the people he works with. While filming Viejo Calavera many of the miners he was working with came to live with him, and Kiro himself would spend at least eight hours in the mine filming with them. Max, the wizard, or shaman, ‘a hermit-like’ figure, has been his friend since 2004 and lived for a year in Kiro’s house during the the process of making the film.

El Gran Movimiento can be difficult to digest at times, but it is ultimately a rich and exhilarating portrayal of urban Bolivia which resonates far beyond the Andes.

El Gran Movimiento will be in UK cinemas from Friday 15th April.