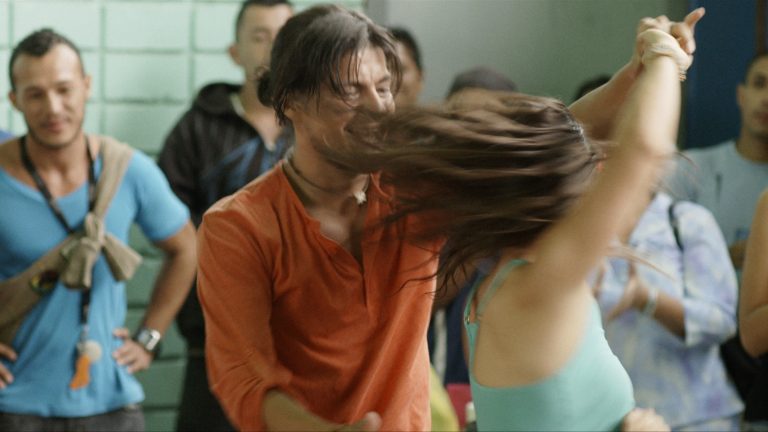 The renegade daughter erring on the side of danger. So far, so familiar for the film staple of rebellious teenagers. But when you add the fact that the adolescent in question is acting alongside real-life inmates in a working prison, it becomes a different kind of movie.

In Presos (Imprisoned), from the Costa Rican director Esteban Ramírez, the fact that true cons play the roles of fictional prisoners is one of the major stand-out points. This is only revealed to us at the end, but it underlines what is a powerful culmination to the film. This strong finish is welcome to make up for the weaker beginnings of the movie.

The lead in Presos is a schoolgirl called Victoria. She has a needy but kind boyfriend, and we are never truly convinced that his dedication to her is reciprocated. Anyway, she wants to break free of restrictive family and romantic binds to find a job for herself.

It is clear from the outset that there is something fishy going on at the workplace where she lands a role as the chief executive’s assistant. The fact she’s answering calls on the important work phone from the San Rafael prison attests to this.

As she spends more and more time talking to the mysterious imprisoned voice on the other end, her character pushes back further and further from her boyfriend. She begins to make secret visits to the man, who is only ever called ‘Jason’ during the film. When the news breaks with her family that she’s been spending time at the jail, their anger only strengthens her resolve to continue meeting Jason.

Family is at the very heart of the film. Mothers and wives queue at San Rafael prison to visit sons and husbands. Victoria and her sister row as their mother cooks and their adulterous father stands quietly in the shadows. Victoria’s wronged lover, Emanuel, even sees her family as his. And then there is the broken family of the prisoner: the mother of his child determined that he’ll never see his daughter; his own, cheerful mum breaking down as she opens up about her fears that her son will die inside.

The way that Victoria is developed in the first half could be enhanced and the clarity and choice of shots in this part could also be tightened. The cinematography improves as the film goes on, with enriched light and depth.

In the closing scenes, we see Victoria transformed from the cute schoolgirl, frolicking with her boyfriend at home, to a drugs mule standing in line outside a prison, waiting to see her beloved inmate. As she walks briskly away from the prison she seems tormented: either the sad realisation of what she has just carried out – transporting internally-hidden drugs into a prison or the upsetting feeling of failing her inmate by pulling out of the drop-off at the last moment.

We are left to work out for ourselves which way Victoria would have gone as she walks sadly towards the camera.

Presos will be screening in Manchester as part of the ¡Viva! Spanish & Latin American Festival 2017 where it will be getting its UK premiere.