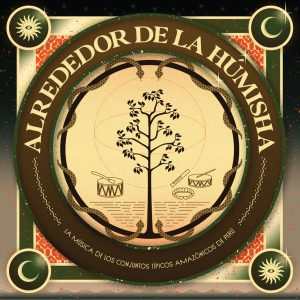 Buh Records has an extensive back catalogue of new, experimental and alternative music coming from the Peruvian capital Lima. Since the label’s creation in 2004 it has supported mostly contemporary artists, yet this stunning compilation delves deep into the Amazonian region of Peru, presenting the music of the conjuntos típicos which formed between the mid-60s to early 80s. These “typical ensembles” are responsible for bringing traditional Indigenous music that emerged from the Peruvian jungle to a wider audience. Luis Alvarado, label manager and curator of Alredador de la Humisha, brings forth lesser known genres of Indigenous Amazonian roots, such as the pandilla, chimaychi and the sitaracuy; genres that are primarily played during carnival celebrations in the region.

The title of the album Alrededor de la Humisha (Around the Humisha), refers to a ritual, in which on the final night of carnival, people congregate and dance around a humisha tree adorned with gifts. The tree is gradually felled with an axe and the gifts gathered. All of this is accompanied by the sounds of traditional ensembles playing the quena (traditional Amazonian flute), bass drum, snare drum and other additions such as violin, clarinet, saxophone, guitar and maracas.

Carnival celebrations, which arrived from Europe, are present across all of Latin America and have evolved differently from region to region. The title of the album pays homage to a significant representative element of the celebrations and each track evokes the spirit of carnival, as well as being testament to the unique way in which carnival music has evolved in this somewhat isolated region.

This is, at its essence, ritualistic music with diverse influences. From start to finish listeners will be taken on a journey where the tracks glide seamlessly from highly percussive pieces to others with influences from Andean huaynos, cumbias, waltzes, samba and even tracks bearing a strange similarity to ancient Celtic music.

The compilation kicks off with “Salta Yanasita” by Conjunto Selva Alegre de San Martin, a powerful number with a hypnotic drum beat, jumpy vocals and frenetic whistling, whilst “La Leyenda de Pifano” by Duo Loreto, a lament of chimaychi origin, is lighter on the percussion though made up for with an enchanting melody and accompanied by delightful instrumentation. “El Shitanero” by Los Pihuicos is also stunning, with vocals, violin and quena all flowing together with the same uplifting and highly emotive melody.

Though the influences are wide and there are many elaborations in each genre, in its basic form the music is marked with a continuous drum beat whilst the melodic line is developed by the quena, appearing to imitate bird song. A fine example of this is “Recuerdos de Selva” by Los Guacamayos, an instrumental and highly percussive tune in which the marching-style snare beat shares similarities to the caixa (snare) section of Brazilian samba.

The compilation is a follow up to the release of El Fabuloso Sonido de Andrés Vargas Pinedo, and fans of the anthology will not be disappointed by this collection of sounds featuring not only Andres Vargas Pinedo’s band Los Pihuichos de la Selva but also close collaborators of the musician, like Jibarito de la Selva, Pinedo’s nephew.

Even more than a compilation, it forms part of a body of work from a project, set up and launched in conjunction with the album, called Central Amazonica; a platform created by Luis Alvarado to salvage and preserve Amazonian music at danger of being lost due to the mismanagement of musical archives. With funding from a governmental project set up to celebrate 200 years of independence in Peru, it also serves as a tribute to the many Indigenous groups celebrating freedom of expression after generations of repression from colonial powers and exploitative industries. Within the many groups, music has served as a common language, and the collective feelings that run deep can be heard throughout the album with each of these highly emotive and compelling tracks. This is music celebrating the everyday; songs about love, work, food and the Amazonian landscapes, all with a strong feeling of local identity and which comes to a climax once a year during the incredibly unique and expressive carnival.