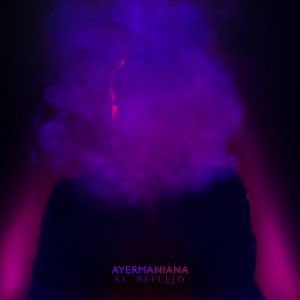 El Reflejo is the latest release from Buenos Aires’ Ayermaniana, a seven-track album featuring psychedelic classic rock croons unblemished by the age of the genre. Crispy blues-driven licks and alien-like reverb merge and strike the band’s third album with a newly-cemented identity.

The band’s previous album Flores Negras began a more percussive and balladic style of psychedelia that was noticeable for its lack of lyrics and abundant mellow riffs. Though we can’t say that this previous work was shy, you can’t help but be awed by a clear shift in the bands creative experimentation on this latest release.

The Tibetan-like sound both opening and closing El Reflejo befriend the listener in the form of a hint, a narrative hint. In between these hazy ends of the album the band depict a clique lurching through the urban pathways of a city undergoing its own mental breakdown. As the listener becomes the witness, the members of Ayermaniana wade through its grimy ether.

From the mosh pit choruses of “El Canto” to the foggy open chords in “Encuentro”, the songs take the listener into an alternative dimension, with the unusual welcoming of an extraterrestrial sewage system. These detailed songs both sear off into the unknown in their latter stages, anticipating a change of pace in the second half of the album.

It’s here that you find a murky confidence amidst the movie-like soundwaves of songs like “Bienvenida” and “Un Eco en el Acantilado”, each of which conjures up a clear yet gloomy stiff upper lip attitude that we had last seen on the band’s first album.

And if the music was not enough, the album’s art resembles the intrigue behind the band’s sound. The foggy purple haze on the front of the album is a calling for viewers to strip their own mental cloudiness through the exorcising of El Reflejo.

The illusory and spooky, yet seductive paranoid feeling emulated by the band’s riffs and arrangements are as wistful as they are urbane and euphoric. Hence the dazed and confused identity they convey. The band’s sound is closer to the psychological ripping found on classic 70s rock and more contemporary underground rock, especially in the Argentine underground.

El Reflejo is available on Bandcamp.