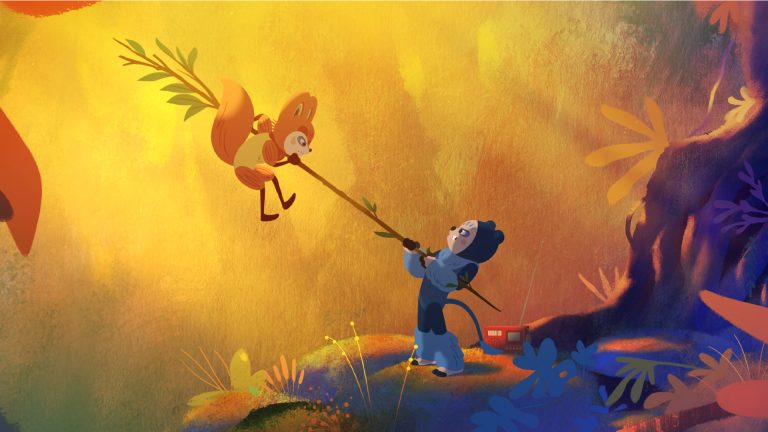 Perlimps (Brazil, 2022) is the third animation feature by animator, screenwriter and director Alê Abreu. It is the director’s follow-up to Boy and the World (2013), which received a Best Animated Feature nomination at the 88th Academy Awards. The animation is making its UK premiere at the 41st Cambridge Film Festival. It is one of two Brazilian productions in the programme, the other being Armageddon Time, a drama with Anthony Hopkins that is a USA co-production bearing no relationship with Brazil whatsoever in its story.

Perlimps follows Claé and Bruô, a fox and a cub who are secret agents from the enemy kingdoms, of the Sun and of the Moon. The former relies on gadgets and the latter on his intuition as their weapons. Despite coming from antagonistic social realities, they have a mission in common, which is to find the nearly-extinct creatures called perlimps. This is because these animals hold the power to create peace in a world divided by a wall separating the rich and the poor, which is about to go on war. However, Claé’s and Bruô’s mission can only be accomplished if they defeat the giants who plan to swamp their woodland by creating a hydroelectric plant which will jeopardise the surrounding forest and eventually eradicate the perlimps.

The title Perlimps was created from the Portuguese word “pirilampos”, which stands for fireflies in English – a clever choice to internationalise it. The light-emitting beetles seem to inspire the neon-like quality of the colours used in the film. Abreu’s rainbow-coloured-acrylic-paint stains, which the film’s backgrounds were created with, help accentuate this. The forest sequences are particularly beautiful with the entire chromatic circle often being used in the same scene.

What could easily be described as a feast to the eye is also a pleasant surprise to the ears: the score by André Hosoi and O Grivo, which permeates the entire film, is delicate and touching. It is reminiscent of the Brazilian instrumental group Uakti (1978-2015), which used pans, drums, marimbas, string and traditional instruments to create a sound which was nothing less than magical. The use of the famous song “Bola de Meia, Bola de Gude” (Milton Nascimento/Fernando Brant) in the middle of the film and in the credits is another highlight, as it works well as a theme which evokes the power of the younger generations to revolutionise the world through a more empathetic approach to each other and to things.

Perlimps‘ elevated aesthetics refreshingly don’t rely on stereotypical Brazilian music and imagery. This successful combination of colours and sounds creates an astonishing result which is likely to please both children and adults. The film’s clear allegory to the dangers of the climate crisis and armed conflicts is a powerful tool to broach the subject with younger generations – especially since the main characters come to realise that their mission can only be accomplished through dialogue and union.

The 41st Cambridge Film Festival is taking place at the Arts Picturehouse in Cambridge from 20th to 27th October. Perlimps is showing on Sunday 23rd and Tuesday 25th October. Tickets can be purchased online.