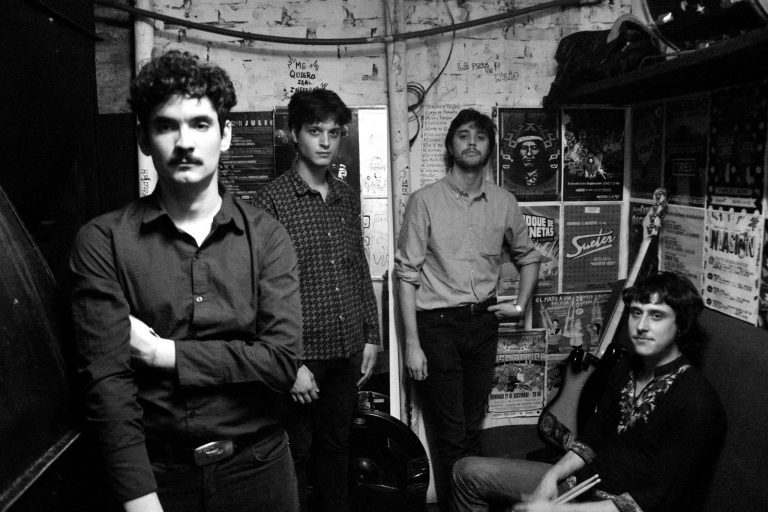 In ‘Las Sombras’ Rock ‘n’ Roll Is Very Much Alive

One should never allow the expression ”rock ‘n’ roll is dead” slip through the mouths of youth; it’s practically a warning of a whole generation lacking pentatonic blues-driven riffs. Luckily for Buenos Aires, the influence of B.B. King, Chuck Berry and, of course, the Rolling Stones, have all left their mark on most millennials’ parents. Throughout the years, these artists have stimulated many locals to hit the scene and pluck their own guitar strings.

Las Sombras made their own way through rockabilly and classic rock, and swayed their way around indie rock, recently at Fiesta Invasión. The substance of their lyrics carried out the intoxicating highs and lows of young adulthood love.

On that night the surroundings of Niceto Club shined like any other Friday. The crowd was gloomy in a healthy rock ‘n’ roll sense of the word. Their clothes: leather jackets, high-top and low-top Dr. Martens, sleeveless rock band shirts, fish net stockings, and rolled sleeves on plain white T’s. The girls: a classy fringe. The boys: a Beatle-like mop-top followed by stubby side burns.

In typical Buenos Aires-style, it was about two in morning when the curtains started sliding towards the sides of the stage, where among the dimmed blue darkness you could get a partial glimpse of the equipment set up with four LED strobe lights ready to flash all over Las Sombras. Half an hour later and the curtains were finally pulled aside completely, leaving on stage the three front men guarding the stringed instruments of the band, set and ready: the camouflage jacket on Nicolas Lippoli, the binary long sleeve shirt on Julian Pico and the faded wood-like orange on Manuel Fernández’s Stratocaster roll in to a fast and trashy riff to get the show started. Right behind them you can see the silhouette of the final member, Mauro Lopez on drums.

“El Ciudadano” starts to play and amidst the lyrics we get the image of a confused damsel who doesn’t know what to say but whose world is nothing but a blowout. Pico’s bassline races to the rhythm of the chorused vocals feeding the hurricane-like pogo. Both guitarists land plane-crashing riffs, and the show has only just begun.

The crowd are clearly excited and hyped, and give in to the show completely, delivering their palms for the applause and their feet for the dance. Further along came “El Kinto” with a parallel buoyant groove and belt-out Bealtlemania harmony. “Atención Dividida” spews its grim venomous lyrics with racy sincerity. But that’s how Las Sombras roll; they make love to our ears while bass and guitar chase us until we fall slowly into the main groove.

For those who don’t know it yet, the band’s signature song is “Van Detrás”. The track brings together the truths mentioned earlier in their poetic lyrics along with coarse guitar licks, palm-muted pauses and lustful blues solos.

Close to the end of the show, “Blues Para Los Amigos” approaches with Lopez’s snare, opening for the initial verse while the cymbals get ready for the heat of the chorus. We fall into one of Lippoli’s lewd solo’s as the band anticipates its goodbyes.

While we see them waving, “Anoche” begins to finish off the show. One last time the bass line opens up for harmonies that are pierced by open guitar chord plucks. As fingers advance through the variations of the pentatonic scale, Lippoli, Fernández, Lopez, and Pico soon vanish off the stage.

The band whipped their riffs with excruciating pleasure. They all sang together to give the vocals a cold and rakish feeling to their poetry. The drums constantly called out for pogo action, but above all, it called for the liberation of madness and stress that had built up throughout the week. Their live show has a certain resemblance to early indie rock and groovy 60s hard rock. Buenos Aires once again becomes the scene for emerging rock ‘n’ roll, not too far from its roots but not too close to the hipster-like approach where things tend to seem obvious and repetitive.