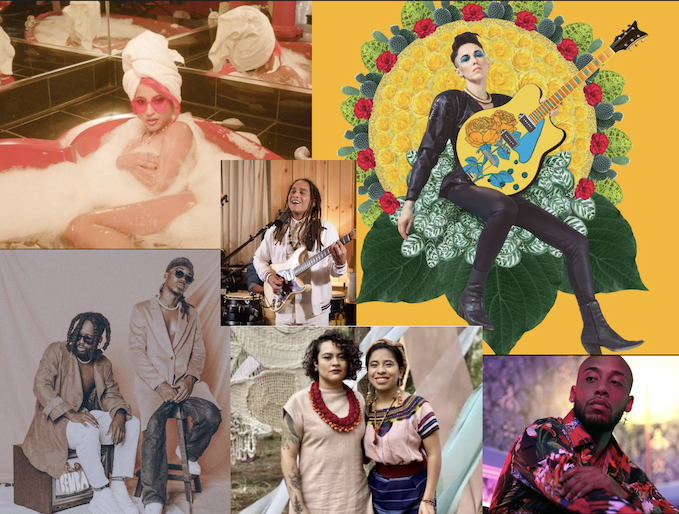 A psychedelic dembow, an upbeat song about being fiery red in a white world, a duo from Cali who are making their AFROPUNK debut, a song honoring the women’s rights, another celebrating women of color, and a Tiny Desk (Home) Concert: what do they all have in common? They’ll all make you dance with their beats and rhythms. Let’s get into it!

La Lulu, real name Luisa Bastidas, describes herself as “Spicy without pepper. Hotter than a volcano.” We have to agree. The triple threat—vocalist, dancer and Latin Grammy award winning violinist—keeps us on our toes with her style of psychedelic dembow, “psicotropical” tracks.

Her latest, “La Pipa de mi Papi” (my father’s pipe), produced by El Primo (Lautaro Burgos of Los Cumpleaños), features a fun, colorful and sexy music video that features the gorgeous Kendra Matic, a drag persona created by Alejandro Lucchetta, an Argentine hairstylist. It was directed by Baby Yors, “a triumphant slice of rock-pop exploration,” who undoubtedly left his signature style all over the visuals.

She had to keep this under wraps for a while, but singer-songwriter Gina Chavez is part of #LifeUnseen, a new platform and bottle collection by the brand LIFEWTR in the ongoing fight for fair representation within the arts. Chavez is one of the 20 artists being featured in the #LifeUnseen​ series and she created a song called “Pitaya Roja” and now its cover art is being featured on the brand’s bottles.

“Pitaya Rojo” was produced by Camilo Lara of Mexican Institute of Sound. Artwork for the track (and on the water bottle) is by Broobs.

It’s nice to see Colombia represented at AFROPUNK by way of Dawer X Damper. The afrofuturistic Cali duo will perform at the emblematic North American festival on the 23rd of April.

The Afropunk Festival – inspired by the movie of the same name – was founded in 2005 in New York as a safe space for alternative-minded black punks to freely express themselves and build a community among themselves, since the punk subculture was, at its best, mostly white.

Dawer X Damper aren’t the only Colombians featured this year. Compatriots Choquibtown will also perform. Watch the action here. Watch the very stylish video for their track, “Quilo,” below.

Every year, NPR Music participates in the SXSW music festival. Last year, the festival was obviously canceled due to the pandemic, but it returned this past March as an online festival. NPR programmed a ‘stage’ of Tiny Desk (home) concerts and presented them on the final day of the festival. One of them features Yasser Tejeda, a New York-based guitarist from the Dominican Republic, and his band, Palotré.

Tejeda tells NPR’s Felix Contreras that “one of the goals of this project is to explore the crossroads between Afro-Dominican musical traditions with anything else that pops onto their radar.” Watch the wonderful and energetic set below.

Guatemalen rapper Rebeca Lane and Kaqchikel singer-songwriter Sara Curruchich have joined forces on “Kixampe,” a song of resistance and struggle for women’s rights. Kixampe, which in the Mayan language, Kaqchikel, means “come”, is a collaborative project by Lane and Curruchich.

“This song is a call to all people so that they can join the different struggles of the peoples, the resistance and the roads. It is a way of making governments see that they have tried to silence us, that we are not going to be silent anymore and we continue to fight,” said Curruchich.

The video was recorded at San Juan Comalapa’s “Paisajes de Memoria,” a memorial for the people who disappeared during the Internal Armed Conflict in Guatemala. Watch it below.

Latin Rapper and songwriter Joelii, best known for his work with platinum certified recording artist and Latina rapper Jenn Morel, has a new EP dropping today. “Buena Vaina,” which loosely translates into ‘good shit,’ comes out after a culminating six months of powerful new releases by the artist.

By way of the Dominican Republic, the Los Angeles -based artist is known for his versatile flows, aggressive rhymes, and bilingual seductive melodies in both English and Spanish. “‘Cool de Modelo’ emboldens the beauty found in women of color who in Latin pop culture continue to be overlooked,” Joelii said.