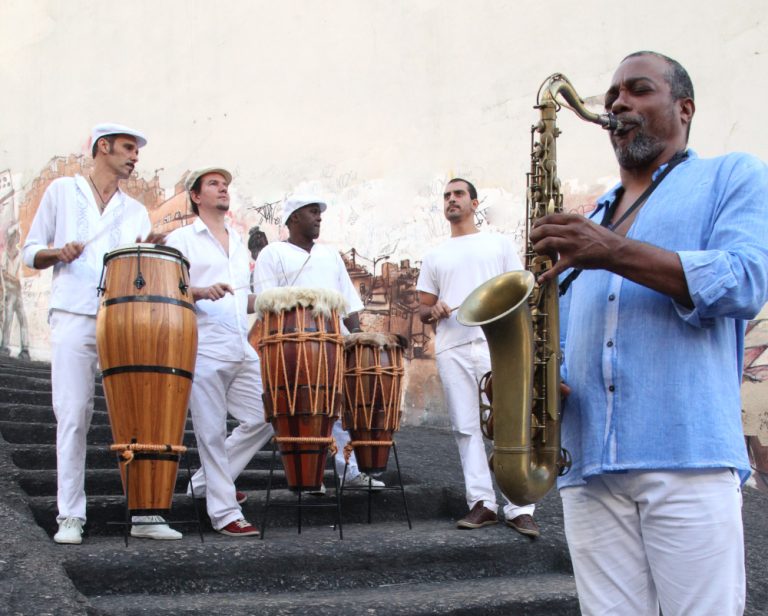 São Paulo-based DJ Tahira has already proven his credentials as a curator, with two fine compilations released under his stewardship, Jazz & Milk’s Levanta Poeira and Música Macondo’s Brasil Novo, showing respectively the past and present of Afro-Brazilian music, especially music of that ilk that had some common ground between jazz and folk. And he looks to continue that path on a new label, Poeira Music, founded in conjunction with São Paulo record store, and now label, Memória Discos.

Their first release, coming out on vinyl and digital, is Kan by Alabê KetuJazz, a duo made up of Brazilian saxophonist Glaucus Linx and French percussionist Antoine Olivier. Their music together is heavily influenced by Candomblé, a religion with which Linx was brought up in Brazil, and which Olivier studied extensively – he was taught by Dofono De Omulú, a respected master drummer, and has become an ogun alabê (sacred drummer), playing in many religious ceremonies.

Linx, for his part, has had a storied career, working with the likes of Elza Soares – he arranged and produced her 1984 Somos Todos Iguais album – before moving to Paris in 1989, where his list of collaborators extended further, with Salif Keita, Isaac Hayes, Carlinhos Brown and Dona Ivone Lara some of those he’s worked with, though he has kept coming back to his partnership with Olivier, which first began in 2005, and which stems principally from Olivier’s research into the rhythms of Candomblé’s Ketu nation.

Their new album, Kan, features six tracks, all written by the duo, except for this premiere, “Canto de Xangô”, which originally featured on Baden Powell and Vinícius de Moraes’s Os Afro-Sambas in 1966. In regards to their cover, Olivier had this to say about Baden Powell: “He was raised around the Candomblé and his Afro-sambas are deeply influenced by the sacred music. We used the traditional rhythm called Alujá which is specially dedicated to Xangô. It worked instantly, proving that Baden Powell probably had that in mind all the time. Kaô kabecilê!”

Kan will be released by Poeira Music on September 16. Pre-orders via Bandcamp.