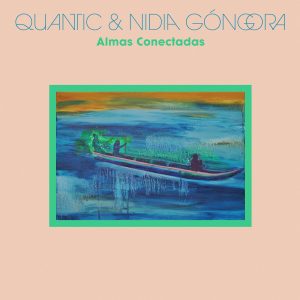 It’s been four years since the last album of new material from Will “Quantic” Holland and Colombian artist Nidia Góngora, yet this unlikely friendship – struck up when Quantic was living in the Colombian city of Cali a few years ago – is the backdrop against which the duo continue to produce projects that transpose a little corner of the Pacific coast to the dance floors of New York and beyond. Following on from Curao, Almas Conectadas takes us headfirst back to Timbiqui, the tiny Afro-Colombian settlement from where Góngora hails.

Famed in Colombia for her cantora lineage (with a mother and grandmother who were famed for being singer-storytellers), Góngora is still well-known as the leader of marimba group Grupo Canalon de Timbiqui, and for her work with young people in the region. Currently based in New York, Holland’s works have spanned decades, taking inspiration from a range of countries and cultures.

“Almas Conectadas refers to the interrelation of cosmic energies, the aura and the way they manifest from the abstract; physical contact does not always exist to be connected”, Góngora comments on this latest album, released at a time when her native Colombia finds itself in a truly uncertain and chaotic situation.

COVID-19 woes aside, endless revelations against corrupt politicians, trafficking across the Darien Gap and rumblings from the jungle are all captured in this work, marrying up Quantic’s production with Gongora’s rich voice and traditional connections.

Lead-single “Balada Borracha” is a cumbia-rock ode to “all the drinkers and drunkards” in Timbiqui’s drinking holes, lurching and stumbling through riffs and a catchy cumbia melody. “El Chiclan” offers a ‘big-band’ style salsa sound and follows on from the album’s opener, “Doncella”, whose strings and arrangements are typical of Quantic’s current productions. “El Avion” is another fun and bailable track, fast-paced and infectious, while the title track is a beautiful arrangement of strings with traditional Colombian percussion.

Almas Conectadas takes the listener on a journey through a land of impossible love, drunken revelry and souls lost at sea. It’s been worth the wait for this latest collaboration from this unlikely duo, capturing the very essence of Timbiqui and its inhabitants, in their latest musical project.