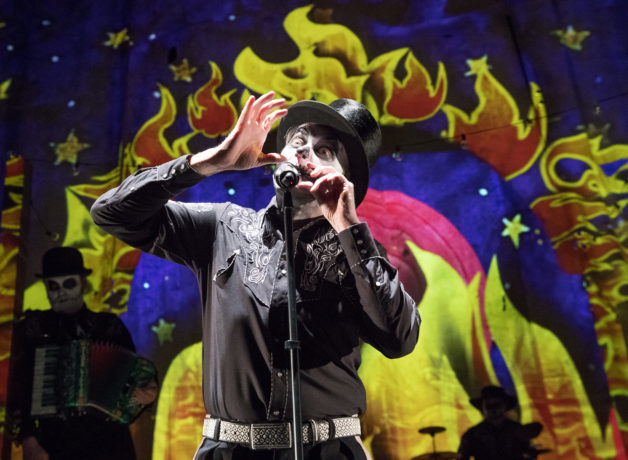 A Shared Vision of Death: Discussing Mexico, Clowns and Cabaret with The Tiger Lillies’ Martyn Jacques

Whether the concept of community is understood from a geographical, cultural, religious, artistic, musical or trendy point of view, as individuals pertaining to a particular community, humans tend to be culturally influenced by being able to refer themselves through the acknowledgment of an ‘other’.

Throughout the years it has become evident that the music of The Tiger Lillies has been capable of developing this approach towards ‘an other’. The British musical project led by Martyn Jacques is fully aware of the world that it is surrounded by and expresses itself through theatrical concepts and themes of different realities, making one aware of all of their senses.

Since their formation in 1989, The Tiger Lillies have taken us on a journey through musical and performative influences from many different communities and cultures, including Eastern European cabarets, Shakespeare, Edgar Allen Poe, sleazy 1980s Soho, Cole Porter standards, and much more.

If I go back to my early teenage punk years, the time when I first listened to The Tiger Lillies, I am reminded of a poetic act that placed cabaret INTO punk perfectly. The gypsy influence, the epic theatre, it was perfect. Now, in their latest production, Corrido de la Sangre, for the first time they are heading to Latin America.

Where does the concept of The Tiger Lillies come from?

I got an accordion when I was about 30, and found that I could combine it with singing in a high voice which is something I have always been able to do. I was watching a lot of Jacques Brel videos… I always liked gypsy music, I was always listening to the Bulgarian choir. I sort of propped all those things together: Eastern European tunes, with the high voices; all those things which inspired me and I liked too around music and that ended up like a sort of cooking pot really, putting all this stuff together.

How would you describe the totality and, for some maybe, even the ‘complexity’ of your music? In other words, what are the influences that came from the arts? Because you know, we can see performance taking place within the shows of The Tiger Lillies.

If you look at Jacques Brel, he is very theatrical, of course Brecht and – well I don’t think it’s cabaret – Liza Minnelli also. A lot of the music that I like has had quite a theatrical element. I also like the circus, clowns very much; in the earlier days we actually used to do circus shows where we performed in tents so I kinda guess that I evolved this set of theatrical circus into The Tiger Lillies shows. We had a show called Shockheaded Peter, based on a very dark children’s book, and which was definitely very stimulating. I think that it was actually the first show I started wearing makeup at, maybe one show before that even, but Shockheaded Peter is where the whole make-up resource came in hard, and has stayed ever since. But then again it comes from a kind of theatre side that music has.

In which ways were you compelled by theatre? Why is the clown (as a theatrical discipline) such an important character? Was it the exaggeration, the exuberating, the mime perhaps?

As a reference, Joel Grey – he does some cabaret – also puts some make-up on. I love that kind of performance, its quite magical the way that he acts in front of all these kinds of audiences, and in that sense I love wearing make-up because at times on stage I’m not being particularly theatrical and not feeling quite on top of my game so I use make-up as a means for creating a distinct atmosphere. I don’t like musicians who just walk on stage with their jeans on; I think it is very important to make choices as on what you want to project, and this is the kind of image I’ve always been interested in portraying; something larger than life, almost not human, even unreal, I don’t really like naturalism that much. I actually think that this is the advantage and the magic of make-up.

Why is the ‘act ‘ so important for The Tiger Lillies? And what I am referring to is: the imagery, the use of almost-prose literature and the combination of acting within your shows, as a means for having a more integral experience with the audience, they are not just watching, they are watching a complete experience for the senses.

I want to take people on a journey and I want to try to take them to a place where maybe they wouldn’t go to with mainstream entertainment. I’m trying to take them to a place that may make them think about things. Think about the strange and also going into the minds of the unknown and trying to understand things from the unknown point of view. Try to go about different perspectives and different angles, the unusual. The whole performance, the whole act that we have been talking about through the interview, is the tool that assists the possibility of taking the audience to these places, whether critics and others find it unpleasant or not. I explore and experiment the boundaries of morality and enjoy the irony. When is something funny, and when does it stop being so? What is and isn’t acceptable? The experience allows the audience to develop those conclusions or answers by themselves.

So would you agree to say that the uncomfortable is part of the experience with the audience? The unknown and getting them out of their comfort zone?

We are talking about your new show, Corrido de la Sangre, which is more inclined towards a new search on Latin American culture. How did this come about?

We have been very popular in Mexico, we have been there a few times and they seem to really like the fact that I play the accordion wearing make-up, and tend a lot to wear a death mask on stage, you know, a death mask make-up, which fits in quite nicely with the whole Mexican Day of the Dead concept. It was a colleague of mine that suggested we should go ahead with the Mexican imagery to do the show. We seem to be popular in some places that are a bit wild; as your career evolves, you tend to see that you attract certain people and you start to know how to fit for an audience that likes what you do.

As The Tiger Lillies, have you thought about expanding to different Latin-American countries other than Mexico where you may be able to find different sources of inspiration?

We went to Argentina last year, and because of my background and sources of inspiration, I really like listening to the music from different places and the instruments, the sounds; in this case the bandoneon with which I fell in love with. I tried to buy this instrument in Argentina properly, but failed. I would love to play this instrument, record an album of Argentinian tango and be inspired by different things. The idea of taking an instrument from another country, like the bandoneon, and playing it and trying to make music in the style of that instrument. The main source of inspiration for me will always be to listen to music, to different and new music. Mexican music, gypsy music like I said before, so most definitely I am constantly inspired by different cultures and their music.

How important is it to reach a new audience like Latin America in general, which can give back to The Tiger Lillies in terms of means of inspiration? In Corrido de la Sangre we have the inspiration through the Central American inspired folk stories for this new image and setting you have developed. How about a new proposal through Brazilian culture or maybe even Peruvian culture, through their stories, through their folk stories in particular?

I don’t know how this may develop. I would really like to use Latin American cultures as a main source of inspiration, but there is a whole production side to it that needs to exist in order for this to happen. I’am really looking forward to it in the future…

The transition though: how does this whole new proposal relate to The Tiger Lillies’ previous work?

The music I have written, the musical lyric sound, comes straight from the opera, you know, where themes such as poverty, the street, poor people, etc. are the main source. So I think this new show, Corrido de la Sangre, is very much a continuation of that theme, including drug lords and other troubles of South American countries. It is quite Brechtian regarding the intention we have and the realities we are treating. We have always sang about the streets, poverty, drug abuse, but most importantly, the concept of death has always been a main theme of our songs. I think that is why they like us so much in Mexico, because we relate in the concept of death in a natural way. Our kind of music is strangely very Mexican because of our shared vision of the death theme.

Corrido de la Sangre is part of the Viva! Spanish and Latin American Festival at HOME in Manchester. More details at homemcr.org