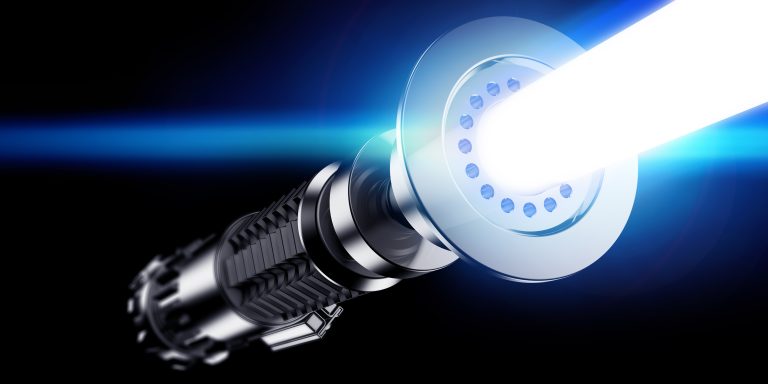 Lightsabers are one of the most sought-after melee weapons of all time, popularized by the Star Wars franchise. They’re used by force-sensitive individuals (gifted beings who can feel the power of the Force) to slay their enemies, repel laser beams, and destroy objects.

If you try to ask anyone born in the 70s about their favorite weapons, you’ll probably receive some responses with the buzz of a lightsaber. This iconic and elegant weapon is a huge part of the Star Wars franchise, representing how creative filmmakers are.

Since they were introduced, lightsabers have caught the interest, attention, and imagination of fans worldwide. Most of them are even willing to spend their entire fortune to collect pieces of such great artifacts.

However, if you try asking some fans, you will find that many of them still have limited knowledge about lightsabers. And if you’re one of them, lucky are you to be in the right place. In this article, you’ll discover some of the most surprising facts a true Star Wars fan should know.

1. The Seven Forms Of Combat Lightsabers

If you closely look at how Mace Windu, Master Yoda, and General Kenobi use their lightsabers, you’ll notice a difference in their movements.

This is because there are actually seven forms of lightsaber combat. These are:

This is the first form of lightsaber combat and is also known as the determination form. Also, it’s often taught at the beginning of the training period to become a lightsaber dueler (for Jedi younglings).

This is the form used to correct the errors of Shii-Cho and is also known as the contention form.

This form is created to deflect and protect the wielder against blasters and laser beams.

This is the most aggressive and acrobatic fighting style of lightsaber combat.

This form improves the third form to allow users to attack rather than just defend themselves.

This is a relaxed form and a combination of other styles.

The seventh form is used to channel the inner darkness in oneself and defeat the opponent.

Furthermore, lightsabers aren’t made equal, so if you want a duelling lightsabers that can stand the test of battle, then Galaxy Sabers is an option. These are perfect for trying out every single form of lightsaber combat mentioned above.

2. Some Materials Resistant To Lightsabers

One of the lightsabers’ well-known features is their ability to slice down anything they touch, such as laser guns, heavy doors, droids, barriers, etc. However, this is not always the case as some materials are quite resistant to attacks and damage caused by this sci-fi weapon.

The hide of the Zillo beast, known to be impenetrable to all kinds of weapons, including lightsabers, is an example of materials invulnerable to lightsaber attacks. Another is Cortosis, which is often used to build armor and gear.

On top of that, the lava dragons or fire worms of Eol Sha also have scales made from crystals, making them naturally invulnerable to all kinds of attacks, including lightsabers.

3. They Are Made From Kyber Crystals

Lightsabers are nothing without one single yet most important ingredient, the Kyber crystal. This crystal allows the lightsaber to glow and release an energy beam. In short, it’s the lightsaber’s power source.

However, Kyber crystals are rare to find, but they’re often harvested in the crystal planet of Ilum. This is where Jedi younglings get their crystal in order to build their own lightsaber.

In addition, the passage to Ilum is pretty challenging to Jedi younglings, but it serves a purpose. These challenges allow the young Jedis to see themselves and find the right color suited to their abilities and personality. That’s why not all Jedi have the same lightsaber colors.

The most popular colors for the Jedi Order are green and blue (violet for Mace Windu because of his special affinity to both the dark and light side of the Force). For the Sith, red, the color of rage and hatred, is most popular because of Darth Revan and Darth Malak, who first started using it.

4. Lightsabers Don’t Shed Even A Single Drop Of Blood

You’ve probably noticed that whenever lightsabers cut or pierce through anyone’s body, there’s no shedding of blood. And you may be wondering why? There is, in fact, a reason for the lightsaber’s clean-cutting experience.

Remember that lightsabers are pure energy drawn out by the wielder using the Force and the crystal. It’s extremely hot, which cauterizes any flesh or wound, preventing it from shedding blood. And as you notice, even dismembered body parts don’t bleed because of this concept.

However, it doesn’t explain the unnatural bleeding in the movie A New Hope when Kenobi cuts the arm of Ponda Baba. Maybe it’s better to wait for George Lucas to solve this mystery case.

Lightsabers are famous for being red, green, blue, and violet. However, did you know that a black lightsaber exists? This is called the darksaber, the only one created in the entire Star Wars universe.

According to Lore (the Star Wars history), the darksaber was created by the former Jedi named Tarre Vizsla, the first Mandalorian to be a Jedi. However, unlike most lightsabers, its black blade is a bit shorter.

After his death, the ownership of the darksaber fell into many hands, including Darth Maul, when he defeated its previous owner Pre Vizsla in a deathmatch for the leadership of the entire Mandalore. Its last owner is thought to be Bo-Katan Kryze, another Mandalorian.

Lightsabers are one of the best weapons Star Wars fans could ever dream of having. Imagine how cool it is to wield a powerful energy sword that can pierce and slice through almost anything. Many have tried to create the perfect lightsaber, but they all fail to copy the best, and it requires more power than they previously thought.

If there’s no way to develop such a weapon, immerse yourself in some facts and impress others with your knowledge about these swords.