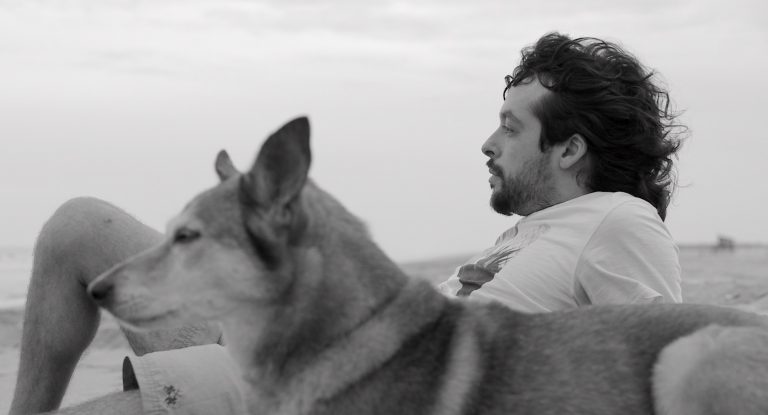 73 minutes is all you need to grapple with the meaning of life in the enigmatic, life-affirming wonder that is The Dog Who Wouldn’t Be Quiet (El Perro Que No Calla, Argentina, 2021), the new film from acclaimed Argentine director Ana Katz, available from this Friday on Curzon’s video on demand streaming service Curzon Home Cinema.

Ana Katz’s sixth film, which received its world premiere at this year’s Sundance Film Festival, was shot in lustrous black and white over the course of several years by a team of five different cinematographers. The time frame in the film is even longer, and what starts as a gentle, unassuming feature evolves into a strange story, taking the minute vignettes of everyday life and placing them side by side with huge events that are almost fantastical, and which lead the film into a sci-fi realm.

Sebastian or Sebas (played by Katz’s brother Daniel) is an ordinary man in his thirties devoted to his loyal dog Rita. The dog appears to be silent, yet is inexplicably judged to be deafening. Sebastian politely faces his neighbours, who complain about his dog’s cries, and similarly reacts to his employers, who forbid pets in the workplace. A series of peculiar and challenging moments like this follow as Sebastian changes jobs and reconnects with his mother. At one point, along with the new responsibility of being a father, Sebastian must contend with an unknown pandemic—one that requires the bizarre preventive measures of walking crouched down and wearing expensive bubble headgear.

Katz´s intriguing and humorous film captures Sebastian’s midlife coming of age as he struggles to adjust to a world that is perpetually changing – and might be nearing its end.

Katz’s previous films The Girl From The Park and Florianopolis Dream screened at festivals in the UK, however this is her first film to get a UK release. With The Dog Who Wouldn’t Be Quiet Curzon have added to an already impressive catalogue of film-makers from Argentina including the likes of Pablo Trapero (The Clan) and Damián Szifron (Wild Tales).