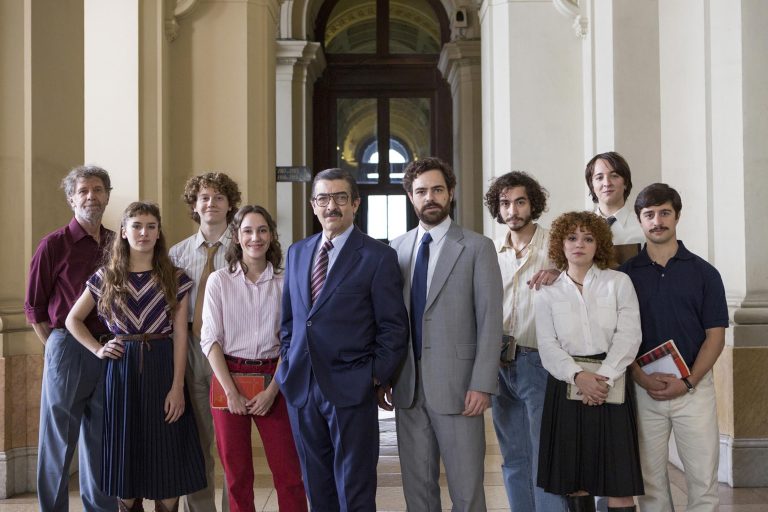 Argentina, 1985 (dir. Santiago Mitre, 2022) recreates the most significant court case in Argentine history – the Trial of the Juntas – which aimed to bring Argentina’s military dictatorship to justice following the country’s return to democracy in 1983. Argentina’s dictatorship was one of the bloodiest of the 20th century, during which it is estimated that 30,000 people were murdered or disappeared.

Ricardo Darín (Secret in Their Eyes, Wild Tales) plays Julio Strassera, an irritable-seeming prosecutor in Argentina’s civil court system who is initially terrified to find out that he will have to lead the prosecution for the trial of the nine military commanders from the 1976 – 1983 dictatorship. It seems like an unwinnable case and one on which public opinion is sharply divided. Strassera must quickly assemble a legal team and get to work amassing the cases of hundreds of victims of the dictatorship’s violence: kidnappings, torture, forced disappearances and murder.

This retelling of a real-life court case is a phenomenal film about how Argentina, newly emerging into democracy, comes to terms with its past and the generational divide that must be overcome in order to do so.

The generational differences theme is one of the most thrilling aspects of this film. Strassera reluctantly accepts the support of junior prosecutor Moreno Ocampo (Peter Lanzani) and his suggestion to bring in a team of young legal caseworkers, given that civil servants who are afraid of risking their careers or who supported the dictatorship don’t want to work on the case. The scene where the young staffers are interviewed for a job on the trial is one of a number of funny moments in this often-heavy film. Strassera also lets his own teenage son read the text of his final indictment and the son suggest edits to help the public understand it better.

The most moving example of the generational divide in Argentina, 1985 is the relationship between Moreno Ocampo and his mother, who changes her pro-dictatorship views over the course of the film. It’s a reminder of how hard the prosecution had to work to win over people who weren’t affected by, or chose not to acknowledge, the devastating violence meted out to the dictatorship’s victims.

Argentina, 1985 doesn’t shy away from showcasing the worst examples of the torture and punishment the victims were subjected to. Laura Paredes’ harrowing portrayal of the testimony of Adriana Calvo, who suffered extreme violence after being kidnapped by the military government in 1977, reduced the whole court (and me, watching at home) to stunned silence.

The direction and cinematography of the film are key to making this film so captivating, given that much of the action takes place in court buildings. The constant death threats and bomb scares faced by the characters build a tension that is almost unbearable to watch. The official sounds the bureaucracy of the justice system – documents being stamped, typewriters – remind the viewers of the absurdity of the task in hand, using a small number of testimonies to represent the actions of a dictatorship that terrorised thousands. And I liked the way that some of the courtroom footage is presented through the lens of 1980s-style cameras, blurring the line between fiction and historical reality.

“Spies don’t eat lollypops,” says a judge to Strassera’s son as he offers the boy a treat after catching him trying to spy on their deliberations. But teenagers don’t often prosecute military dictators. Lawyers don’t usually convince their mothers to change their long-held views. Add to this the contrast of the dictatorship leaders getting a fair trial after denying their victims any access to justice and this makes Argentina, 1985 a film that is full of surprising things. The brilliant acting and direction mean that this film will be hard to forget.

Argentina, 1985 was screened at the recent BFI London Film Festival and is now available to stream on Amazon Prime