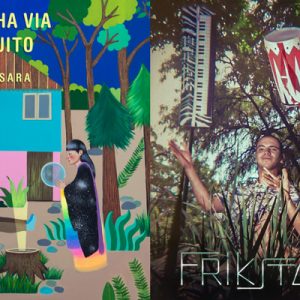 Since 2011’s ground-breaking Rio Arriba, it has become apparent that Chancha Via Circuito (Pedro Canale) is more than just a producer of digital cumbia. Three years, and a multitude of incredible remixes, have passed since then, and his third album Amansara is his most intricate, and well-rounded release to date. From the opening track “Hola”, to the closer “De Tu Mano”, the idea of the album as a whole is something Pedro Canale has carefully considered.

The beautifully serene “Sueño en Paraguay” drifts impeccably into the first collaboration of the release, “Jardines”, with Colombian musician Lido Pimenta. Her haunting tone underpinned by a strong lilting beat, peppered with chimes, makes for an altogether entrancing piece. There are moments like this throughout, and Canale’s ability to capture a specific mood in his work is masterful. Part of this could probably be attributed to his background in electro-acoustic music, where an appreciation of the overall soundscape is pivotal. But there is something less arbitrary, and more profound than that in this work. Even with such a strong rhythmic basis, each track has a certain organic quality to it; stories are told, emotions evoked, and landscapes envisaged.

There is plenty of scope for more upbeat moments on the record, too, with the Buenos Aires based rapper Sara Hebe featuring on “Camino de Posguerra”, which is roughly translated to the post-war path. The blistering flow of Hebe married with Canale’s powerful beat almost sounds like a call to arms, the crack of the snare striking through the body of the listener. It’s a really exciting moment, and a reminder of the versatility that Canale exhibits.

His music has been categorised as post-dubstep, and these elements are visible at times, with “Tarocchi” having an air of the Nagual Sound Experiment, or Ital Tek’s work, but it would be a mistake to simplify and pigeon-hole a record as bold and far reaching as this. Pedro Canale’s ability – so deftly demonstrated in his previous work – has now been cemented in Amansara. It is a truly wonderful release that has redefined what is possible to achieve within electronic music.

Fellow Argentinians and ZZK stalwarts Frikstailers – Rafa Caivano and Lisandro Sona – have served up a delicious dose of intergalactic cumbia on their latest EP, Crop Circles. The six tracks presented here, all in their own way, are indebted to a fascination with the stars and the otherworldly, and this is reinforced in the choice of song names.

On “Omeprazol”, rich and bold textures weave their way in and out of focus, as so does the rhythm behind it. At points it can become so lurching that it is unclear which elements are even holding it together, and its gradual, creeping pull is overly infectious; a really clever work. A personal highlight would have to be “Venus”. The sound of an eerie, alien choir builds with an increasingly agitated sub-bass to unveil a gargantuan climax of machine gun-like snares, and unholy synth lines.

The majority of tunes on this release – notably “Kepler” and “Vakum” – are destined to tear up the Buenos Aires club scene, but with the level of detail and with such a strong theme throughout, this EP provides as much for the dance-floor as it does for the most scrupulous of listeners.

Chancha Via Circuito’s Amansara is released by Crammed Discs in Europe and Wonderwheel Recordings in USA and is available from Amazon (UK | USA) and iTunes (UK | USA).