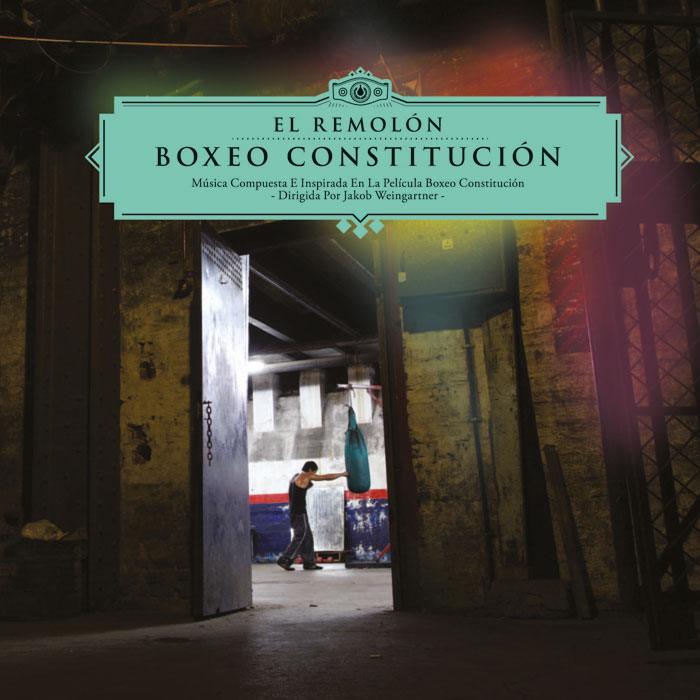 On Boxeo Constitución, El Remolón has offered up what must be the world’s first digital cumbia soundtrack. Approached by Austrian documentary maker Jakob Weingartner, who had been inspired by the Argentine producer’s digital cumbia anthem “Bolivia”, El Remolón agreed to write the score for Weingartner’s tale of the Buenos Aires underground. The film and its music tell the story of a subterranean boxing gym hidden in the foundations of the city’s infamous Constitución railway station.

Each of the ten tracks were specially composed by the producer alongside his newly formed ‘Conjunto’ band for the documentary, released to some acclaim last year. The soundtrack is constructed from found sounds recorded in the dripping basement ring, snippets of speech from the film’s main characters, live instrumentation and El Remolón’s own digital creativity. The result is a free flowing, imaginative and fitting soundtrack to Weingartner’s story and the struggle of these young boxers to escape the harsh reality of the Buenos Aires slums. It’s always difficult to judge a soundtrack without seeing it in the context of the film, especially in the case of Boxeo Constitución where sound designer Sven Serfling worked with the director to ensure each of the tracks fitted the narrative like a glove. Having said that, there is no doubt the music conjures up the film’s content, from the weight of the repetitive sub-bass punches to the dancing cumbia rhythms. What’s more, Boxeo Constitución stands up on its own as another quality and fresh album of Argentine “digital cumbia” from one of the scene’s most exciting producers.

Though based on a foundation of cumbia villera, taking inspiration from the swaggering off-kilter rhythm and the overly-modulated Casio keyboard melodies, El Remolón skilfully moulds his own sound and blends it into the context of the film. Cumbia may be the foundation but, like the railway station, there is another story hidden beneath. Much like on “Bolivia”, El Remolón’s ear for a catchy melody shines though and is most apparent on the brilliant “Constitución”, one of the producer’s best tracks yet, turning a wobbling villera melody into a killer slice of melodic, digital cumbia. “Milton” is a surprisingly good mix of villera rhythms with tango while “Artime” is a breath of fresh air with its snapping claps and warm brass instrumentation. In a classical soundtrack style the album weaves in melodic themes and variations, best highlighted on “José” and its sister track “Boxeo”, featuring Lido Pimienta which also serves as the most accessible track and something of a centrepiece to the soundtrack.

The album clearly shows the evolution of El Remolón’s sound since his 2008 debut Pibe Cosmo, released through ZZK Records. Boxeo Constitución pushes digital cumbia in new directions, expanding the horizons and benefitting greatly from the marriage between original instrumentation and subtly infused electronica. Importantly, it manages to achieve the difficult task of simultaneously being a fitting soundtrack to Weingartner’s thought provoking documentary and a quality album in its own right.

Boxeo Constitución is available from Amazon and iTunes