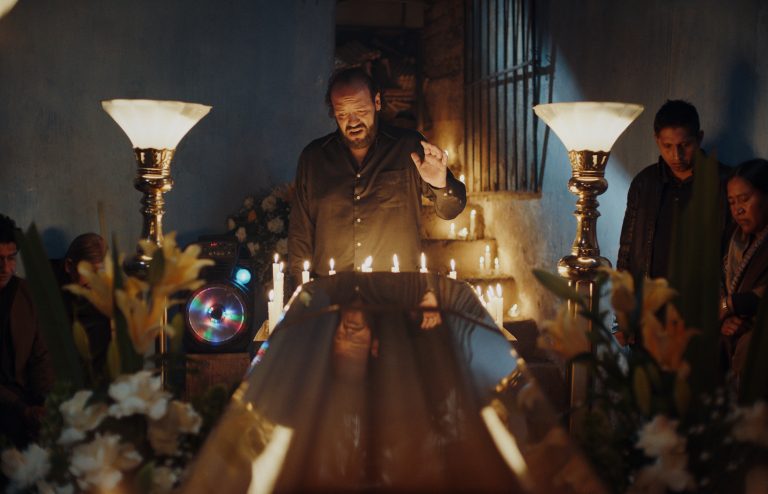 Humberto has just been released from prison after four years. We do not know (nor will we ever know) the reasons that led him there. His first move after his release is to visit his daughter Aleida, who is now in the custody of her maternal grandparents. The grandparents in question, Elizabeth and Carlos, are influential (and wealthy) evangelist pastors, and are reticent about the relationship that Humberto establishes with their granddaughter. Their daughter, Humberto’s wife, is dead. Although we never know with certainty the reasons for her death, there is a suggestion that it may have been caused by suicide, perhaps a result of the strong moral standards that were put in place in her home.

The Visitor (El visitante, Martín Boulocq, Bolivia, 2022) pivots around two narratives: a criticism of the influence of the Evangelist Church in Bolivia and its manipulation of the needs of the poor, and the development the relationship between Humberto and Aleida. The father and daughter have a strong bond but this is constantly put to the test by the actions of the maternal grandparents.

The film goes beyond being merely a social criticism due to its script and the actors’ performances. Subtle, fluid, and credible, the script gives us enough information but does not underestimate the capacity of the audience, who must work to imagine and connect the dots. As a result, the ending of the film is open: instead of offering a definitive answer it leaves the viewer with questions.  With a screenplay that stays away from the obvious, an actor such as Enrique Aráoz (Humberto) flourishes, crafting a character beyond the stereotypes. Humberto is complex yet passionate, torn between what he must do to preserve his daughter’s love and the anger he feels at being manipulated and controlled by his in-laws.

The Visitor is much more than just a social commentary: it is profound and recognisable, relatable and moving. The story Boulocq tells is small, everyday and beautifully told.

The Visitor was the winner of Best Screenplay, International Narrative Competition at the 2022 Tribeca Film Festival and will be screened this evening (28th September) in Silver Spring, Maryland at the AFI Latin American Film Festival which runs September 22nd -October 12th as part of National Hispanic Heritage Month.