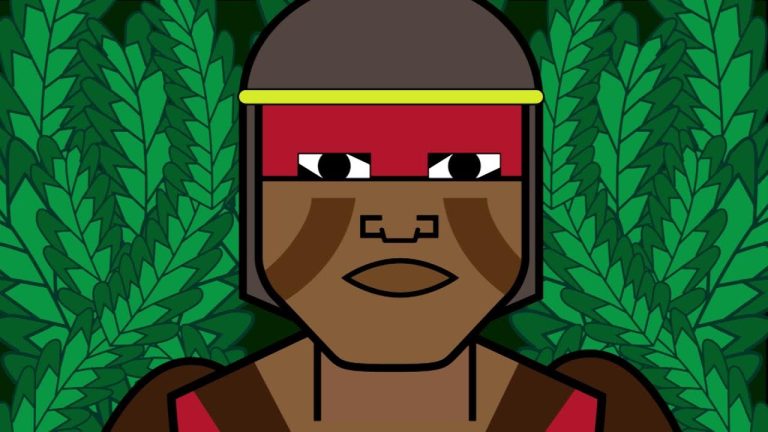 In these two animated shorts – both hovering around 15 minutes long and screening as part of the UK’s inaugural Brazil Indigenous Film Festival – filmmakers Masanori Ohashy, Isael Maxakali and Charles Bicalho demonstrate their immense talent for storytelling. The films take up traditional folktales from the Guajajara and Maxakali peoples respectively, and communicate them with a mesmeric creative energy.

Masanori Ohashy’s A festa dos encantados, produced in 2016, retells the story of a shaman who descends – via an anthill – into a subterranean domain peopled by spirits who teach him rituals and songs of celebration which he takes home to his people. Throughout, we are reminded that “the story is not mine”. Instead, the traditions of the Guajajara belong to “our spirits”, not to an individual being but a collective cultural identity built over centuries of communal life. The spirits who authored these traditions (we are told that “until today his people, the Guajajara, maintain the tradition of the festivals that they learnt with the spirits”) are boisterous and joyful, and Ohashy cleverly weaves images of their celebrations together with documentary footage of the Guajajara singing the same songs, underlining their cultural continuity and enduring strength of their traditions. It is a remarkable display of defiant vibrancy against the harsh circumstance the Guajajara endure in their territory in a border area between the Amazonian biome and the Brazilian savannah.

The artwork is striking throughout, and the vivid colours and bold, chunky lines add a great charm and vigour to the film. Ohashy’s backgrounds are never dull, but instead the sky and earth are encrusted with patterns and shapes that seemingly transplant the story onto an enormous tapestry. Meanwhile, in the foreground, two-dimensional figures move laterally across the screen like characters in a video game, the simple shapes coming alive through Ohashy’s intelligent filmmaking. Of particular note is the subterranean world which the shaman enters in a bid to find his brother – kidnapped by an enormous flying dog –, a world painted in rich blues and electric violets which enchant the screen.

If we are swept along by the film’s many delights, its conclusion brings a remarkable change in tone; an expression of rage and sorrow over the Guajajara’s degradation at the hands of logging interests and the failure (or refusal) of the Brazilian state to offer help. It is a tragic note in an otherwise delightful film, and underlines the fact that the creativity, tradition and heritage on display in Ohashy’s work are at serious risk.

In Konãgxeka (also from 2016), directors Isael Maxakali and Charles Bicalho present a Maxakali creation myth: the story of an enormous flood, which eventually results in a harmonious reconciliation between man and nature. In the Maxakali language – which the film uses throughout – Konãgxeka means ‘big water’, and refers to the punishment sent by the Yãmîy spirits for humanity’s greed and abandonment of the natural world around them. The deluge that comes is sparked by an indigenous villager’s betrayal of the previously productive relationship between man and animal – refusing to reward an otter that helps him catch fish. When dawn breaks the next day, the sole survivor – having sought refuge in a tree trunk – is invited to marry a female animal and thereby restore the harmony between man and beast. The sequences which convey this renewed accord are oddly hypnotic, with a spinning mandala eventually bringing the two bodies together in space.

Isael Maxakali is one of the most prominent and well-respected Indigenous artists of recent years, and this film allows him the space to showcase all of his filmmaking and artistic talent. The design is stunning, with richly coloured tableaux overlaid with cut-out animation techniques made using 2-D images produced by members of Maxakali Community of Aldeia Verde, in Minas Gerais. There is an engaging materiality to the artwork, with clearly visible marks on the canvas giving texture to the film and the traditional Maxakali art style immersing the viewer in a new universe. Despite the apparent simplicity of their medium, Maxakali and Bicalho show an aptitude for crafting drama, and a line of lightning on the horizon, or scenes of stick figures falling under mounting waves produces a remarkably powerful effect.

In both of these films, the directors demonstrate a wonderful creativity in taking straightforward, two-dimensional forms and harnessing them in service of a remarkable dramatic affect. Though they’re short, the films tell compelling stories plucked from a vibrant cultural tradition. Not only are the films engaging in their own right, they also offer a reminder of the creativity and rich sociocultural uniqueness of peoples whose ability to extend their traditions through time is singularly threatened.