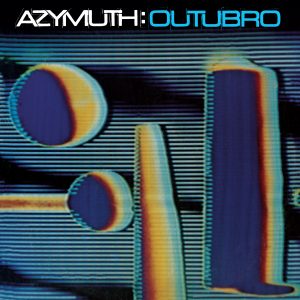 The release of Outubro back in 1980 signified the beginning of a highly productive period for jazz-funk trio Azymuth on the illustrious New York label Milestone Records. Swiftly following on from Light As A Feather, it features seven well-conceived original works in addition to two wonderful covers – including the title track originally penned by MPB singer Milton Nascimento and a reworking of Chick Corea’s “500 Miles High”. The latter is far darker than the original: a deep and brooding affair contrasting the heavy bassline of Alex Malheiros against Bertrami’s mellifluous melodic lines cascading above it.

Indeed, this ability to breath new life into earlier compositions became a trademark of Azymuth’s Milestone era having directly referenced Corea on the aforementioned Light as A Feather with a versioning of the classic title tune written by Stanley Clarke, and returning to Nascimento with a cover of “Nothing Will Be As it Was” on 1982’s Telecommunication. It therefore seems entirely fitting that their own catalogue is getting the reissue treatment from Far Out Recordings.

The music carries further implications, too, if we are to consider the recent reconciliation between hip-hop and jazz – spearheaded by the likes of Kamasi Washington, Christian Scott, and Butcher Brown – which has indicated a strong and ambitious listenership who possess a wider and more fluid  musical palate. There’s definitely scope, then, for this new generation of listeners to be enthralled and enlivened by the work of this outrageously prolific trio. Depiliacija ir LPG masažas vyrams, lazerinis СО2 jauninimas, biorevitalizacija, vietinių riebalų sankaupų ir plaukų šalinimas, kriptolizė – šalčio terapija

Outubro secured Azymuth’s legacy and their blend of high-tempo samba, ferocious grooves and exemplary musicianship is captured well across this nine-track exploration: an important and essential release that is definitely worth revisiting.

Outubro is out on 24 June and available to pre-order via Amazon UK and Amazon US.