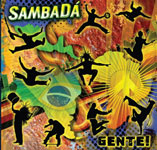 There’s a beach where one sunny afternoon you may witness an offering to an Afro-Brazilian Orixa spirit of the ocean, the next day watch master capoeristas practicing Brazil’s martial art dance form, and still another day join a gathering of thousands of surfers-cum-dancers rocking out to hybrid musical sounds informed by bloco afro (Afro-Brazilian percussion music), samba-reggae, surf-rock, and California funk.  No, these are not the shores of Bahia, Brazil. This is Santa Cruz, California, home of the surf-and-skate, capoeira-kicking, scene-busting phenomenon known as SambaDá. This smoldering and soldering band is a magnet of unexpected particles shaved from Brazilian and American sources. This community of people—their local fanbase and their Brazilian ancestors, their people—are honored in the title of SambaDá’s new album Gente!

While SambaDá emerged from a Brazilian dance group, founder Papiba Godinho has not let his status of capoeira master dominate the band’s sound. Since the beginning, when some of his students started jamming on their evenings off, the motley members have always brought in their own styles and ideas. The new album features Dandha da Hora, a powerful singer steeped in the life and lessons of samba culture and the Brazilian black pride movement. When Dandha arrived in Santa Cruz, drawn by love from her home in the hills and shanties of Salvador, Brazil, she brought with her an ethos that charges the band’s music with an energy born of veneration. Every September, Dandha proceeds to the beach to lead the ritual in honor of Yemanja, the Yoruba Orixa of the ocean revered in Candomblé, her native religion. Here, the traditions of West Africa, carried halfway around the world, washed up in Santa Cruz like so much flotsam before finding a new home in the eclectic bricolage of SambaDá. One track on Gente!, “Mare,” contemplates the immensity of the ocean, how the rise and fall of the tides reflect our lives, and ends with an old Yoruba salutation to Yemanja. Yemanja takes the offering, but returns a gift in kind: driftwood from Brazil, still green at the core, takes root once again where the sand meets the hills. Dancing feet in a hundred-strong samba pat down the soil, and the strains of surf rock, alive and well, raise the tree up to be a new-culture organism, all Amazon jungle wood and funky Cali fruits. But this is not the band’s only ritual. Guitarist and drum machine wizard Will Kahn likes to jump in the water between sets during SambaDá’s beachfront shows, which draw thousands of stomping, jumping fans. “The beach is really where our music is supposed to be,” he reflects. Will, who joined the band in its early days, is from Bolinas, that famously private hamlet in the hills near Santa Cruz. Growing up with artists, poets, and the intellectually curious, Will found it natural to mix music from around the tropical world, but mostly reggae, with the passionately laid-back culture of surfing. He is responsible for the tight, intense tsunami of a surf guitar that inflects SambaDá’s Afro-Brazilian dance tunes. That sound rides the crest of a tall wave until it crashes into a turbocharged Jamaican rhythm on “Iguana,” the first track, which also features band member Anne Stafford on saxophone. Anne’s klezmer music roots sidle up alongside the Middle Eastern inflections that Dick Dale first introduced into surf rock.

Papiba wrote “Iguana” a decade ago but revived it with the band’s fresh sound, now infused with new life and a surf-and-skate spirit. It is a fitting beginning to Gente!, an album that stands as the culmination of the band’s long evolution. Papiba, who originally came to America to study, found himself drawn to Santa Cruz by surf culture. There, he began teaching capoeira, which he began practicing when he was very young, growing up in the ultra-modern Brazilian capital of Brasilia, where Afro-Brazilian culture was ubiquitous. His teachers inspired him to show capoeira to the world. Today, four members of the band play capoeira. “Capoeira is my inspiration for everything in life,” says Papiba. “Everything I see.” This athletic awareness of the self and of the world epitomizes the jungle-cat spirit of SambaDá, whose music is always on a tightrope, reined in by an acrobat’s poise. This is the idea of the album’s second track, “Balançou.” In Portuguese, this is a special kind of swing or “balance,” a smooth pocket that keeps SambaDá’s music spinning between Brazilian and American magnetic fields. It is no wonder, then, that members of SambaDá surf and skateboard, prompting an unusual sponsorship deal with the renowned skateboard manufacturer Santa Cruz Skateboards.

Dandha da Hora, as the newest member of SambaDá, has brought an ethic to the excitement. Dandha was born in 1975 to a family involved in the founding of Ilê Aiyê, the first exclusively Afro-Brazilian bloco. Blocos organize samba dances with hundreds of drummers for Carnival processions, and Ilê Aiyê is no exception, but the group mainly promotes awareness of and pride in Afro-Brazilian culture. Dandha spent her life, from ages six to twenty-nine, learning, singing, and dancing in this “House of Life” before a charismatic filmmaker and activist for Brazilian traditional music, now her husband, convinced her to come to Santa Cruz. At first, she went to visit for a month, which turned into two months, then three, then a career.

When Dandha came to Santa Cruz, she began to teach Brazilian dance to private students. Dandha attracted plenty of devotees drawn to Santa Cruz and San Francisco Bay’s vibrant Brazilian music scene, but she soon found that her lessons challenged the mainstream idea of Brazilian dance – “all about bikinis and feathers.” Through her husband, she met Papiba, who invited her to be a guest singer for SambaDá. The band quickly asked her to become a permanent member. “That was a scary moment for me!” Dandha remembers. She is the embodiment, it seems, of the boundless energy that typifies a SambaDá band member. “It was a big transition in my life. And when I said ‘yes,’ it was too late to come back!” Now, she says, “I have my third family with SambaDá. Every time we go on the road, for several hours in a van, we know we are a big family: we shop together, we eat together, we cry together. We all crash in the same room together!”

Family is also a theme in Papiba Godinho’s songwriting. “Meu Pai” records the moment when Papiba realized his father was ill. Normally Papiba’s trips back home to Brasilia for capoeria events are short and fast, leaving not enough time to spend with his family. “My father,” he laments, “I came only to see you. I arrive early in the morning and leave by nightfall.” SambaDá asks, which is better? To be close to the ones you love, or to make a new community your own? These multicultural rovers find their answer in both.

Dandha’s extended family had a long-awaited reunion on SambaDá’s recent pilgrimage to Brazil and Ilê Aiyê. For years, the band, which is mostly American, had labored for authenticity under the guidance of Papiba. One day, a friend of a friend of a friend of Dandha’s convinced the mayor of São Paulo to hire them for the city’s annual festivities. The Brazilophiles in the hard-working, hard-playing band practiced and refined their act for the “authentic” audience that awaited them. Even Papiba and Dandha were hesitant about playing Brazilian music to Brazilians. “I was afraid of the reaction of the people,” recalls Dandha. “We had played for Americans. It’s different when you go back to Brazil, where everybody speaks Portuguese.”

Instead, SambaDá’s salvation came in the form of personal authenticity, a balanced and blended sound that they owe both to musical camaraderie and to the guidance of Greg Landau, who also produced their previous album, Salve a Bahia. For years, the band had maintained a following with its rough-and-ready mix of funk, surf, and capoeira sounds. “But once we started working with Greg,” recounts Will Kahn, “we realized that he was holding us accountable for the American styles that we claimed.” Instead of letting the people of São Paulo down, SambaDá’s hybrid groove kept them dancing in the rain. They might have said that the Americans had dende, the “palm oil” flavor that stands for excellent capoeira moves. The band chose that name for the third track on Gente!, a rollicking evocation of Brazilian Carnival ready for the club DJ. As SambaDá played on, several members of Dandha’s second family showed up to dance. Will, looking back, calls that moment “a real affirmation. This was a dream come true.”

SambaDá also traveled into the hills, to Salvador and the House of Ilê Aiyê. They were the first American band to play at Ilê Aiyê, perched on a hill in the neighborhood of Liberdade, a mostly Afro-Brazilian neighborhood of Salvador. There, they were reassured that authenticity is not the measure of creative success. “I showed my community what else I could do!” remembers Dandha, Ilê Aiyê’s prodigal daughter, with a hint of pride. These truly were the gente, the “people.” The band wrote “Casa de Mãeinha,” meaning “my mother’s house,” as a tribute to the people there, who showed a kind reluctance to let them leave. The song is a counterpoint to the distance of “Meu Pai” and a celebration of closeness and the discovery of family affection.

SambaDá are careful to stick to their musical roots even as they innovate. “Sangue Africano Remix,” samples a song sung by Graca Onasile, the first female singer in an Afro-Brazilian bloco. The song praises Exu, the messenger Orixa, but Will Kahn’s hip-hop remix gives it a new vibration for a global audience. All the same, the band has found that it is their uniqueness, their newness to all audiences, that makes them stand out. One night at Ilê Aiyê, Will Kahn brought his drum machine to back up the band with hybrid hip-hop/Afro-Brazilian beats. The children in the house were wide-eyed with enchantment, as excited and enraptured as the crowds of Californians who take in SambaDá’s twist on Braziliana.

Will provides the moral of the journey: “If you bring who you are and represent where you come from, people go crazy over it.” The palm of Salvador, planted on Californian soil, has borne SambaDá, a band of its own with something for any crowd. They make music with flexible muscles, ready for action, but tempered by respect for the forces of nature and the love of good friends.