When I first saw Sounds and Colours ask for a list of the top books in Latin American history, I assumed such a list would come easily to me. Ideas for books to include, of course, have come easily, but it has been more difficult to select those to highlight. The selection of just a few books to encapsulate the history of a region that spans about two-thirds of a hemisphere and is full of diverse cultures and geographies is bound to leave out much, showing just how limited the kind of unity implied in the term ‘Latin America’ really is. Moreover, what is meant by the term ‘history’ itself can be elusive. The lively controversies that often erupt over historical interpretation show the field to be much more than merely the boring repetition of dates and names from the past that it is sometimes characterized to be.

This list will follow what may be my own personal conception of history, that it is a dialogue between the present and the past based primarily but by no means exclusively on textual evidence, but I think it is one that can explain, at least partially, why our understanding of history seems to be ever-changing and recognizes the way that history can look very different based on the perspective of the observer. Conveniently, this definition also justifies the approach I’ve taken with this list, as I have tried to incorporate at least a few older texts and mention several other crucial texts beyond the five specifically highlighted. 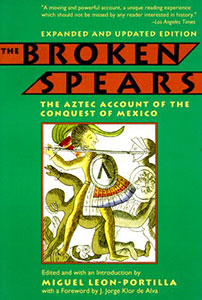 1. The Broken Spears: The Aztec Account of the Conquest of Mexico by Miguel León-Portilla

Although the human occupation of the region stretching from the Rio Grande to Tierra del Fuego goes back more than 10,000 years (conservatively speaking) and some still living cultures in the regions began well before 500 years ago, I consider that what we now think of as Latin America to have begun with the violent conquest of the region by Spain and Portugal. León-Portilla’s path-breaking account, first published in 1959 by the National University of Mexico, tells the tale of one of the more spectacular chapters of that conquest through translations of contemporaneous Nahautl accounts. These first-hand accounts of shattering loss can be paired with the well-known Historia Verdadera de la Conquista de la Nueva España (True History of the Conquest of New Spain), a warts-and-all recollection by Bernal Díaz del Castillo, a foot soldier under conquistador Hernán Cortes, which has been translated into English under many titles. They can also be combined with other indigenous chronicles of the early colonial period like Quechua nobleman Guaman Poma de Ayala’s Nueva Corónica y Buen Gobierno (New Chronicle and Good Government) to show some of the ways natives of the Americas understood, and resisted, the startling transformations wrought by Iberian colonization. León-Potilla was a pioneer of ethnohistory, the combination of anthropological and historical techniques that has revolutionized scholarship on the indigenous peoples of the Americas over the last few decades.

The Broken Spears is available from Amazon UK and Amazon US. 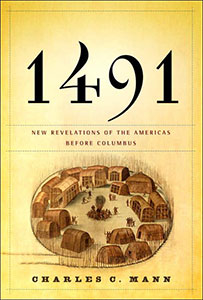 2. 1491: New Revelations of the Americas Before Columbus by Charles C. Mann

Much of the kind of ethnohistorical techniques that León-Portilla pioneered is ably synthesized by journalist Charles C. Mann in 1491, which was published in 2005. The inclusion of this title, I’ll admit, is a bit contradictory to my assertion in the last paragraph that Latin America did not begin until the conquests of the Spanish and Portuguese, but Mann offers such an accessible, comprehensive and fascinating account of the great sophistication of the native societies of the western hemisphere before 1492 that I believe it should be read by anyone interested in the past of the Americas, north or south. Particularly fascinating to me are the sections on the great Aztec capital Tenochtitlán, one of the world’s great cities at the time of conquest (cleaner, more beautiful and larger than most European capitals of the same time); the details of the knot-based khipu writing system of the Incas; and perhaps the most surprising part of the book, the dense settlement in the Amazon that was made possible by human-made terra preta do ĺndio soils, in an area thought of as a timeless wilderness. I also highly recommend Mann’s 1493: Uncovering the New World Columbus Created (although I wish that subtitle didn’t give Columbus so much undue credit), which details the world-spanning after-effects of the conquest; it’s quite remarkable, for example, how much silver from the massive deposits discovered in Mexico, Peru, and what is now Bolivia ended up in China. (I feel I should state that Mann’s ideas owe much to the kind scholarship pioneered by Alfred W. Crosby in the highly readable The Columbian Exchange, first published in 1973).

1491: New Revelations of the Americas Before Columbus is available from Amazon UK and Amazon US. 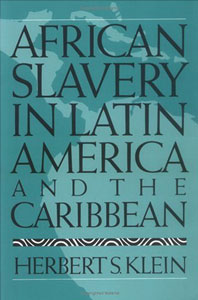 3. African Slavery in Latin America and the Caribbean by Herbert Klein

I am slightly hesitant to recommend this rather ‘dry’ book from 1986 suitable for use as a university-level survey text, but because it offers a comprehensive look at an institution that shaped so strongly Latin America culture and history, particularly in Brazil and the Caribbean, I would feel remiss in not including it. In this book, Klein collects together the work of the generations of historians since the end of World War II who have studied slavery in the Americas, which emphasizes both the horrors of the Middle Passage and the back-breaking labour on the plantations and in the mines of the New World as well as the surprising ways in which enslaved peoples shaped their own destinies. Much of these works owes some kind of debt to the pioneering work of Brazilian anthropologist Gilberto Freyre, particularly Casa-Grande e Senzala (The Masters and the Slaves), which was published in 1933. While Freyre has been rightly criticized for portraying Brazilian slavery as something of a benign institution and idealizing the extent to which Brazil’s syncretic culture, deeply influenced by African religion, foodways and music, is a “racial democracy” free from prejudice, it is undeniable that he brought positive attention to the contributions of African slaves and their descendants to his country. His work had a tremendous influence on Brazilian culture in the decades to come, perhaps most notably in the novels of Jorge Amado.

African Slavery in Latin America and the Caribbean is available from Amazon UK and Amazon US. 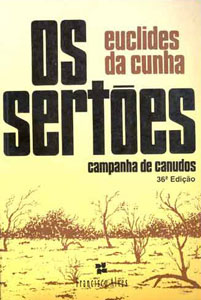 4. Os Sertões (often translated with the title Rebellion in the Backlands) by Euclides da Cunha

I offer this 1902 classic of Brazilian literature with even more trepidation than African Slavery in Latin America and the Caribbean, partially because it is downright unclassifiable and not exactly hemispheric in concentration. This idiosyncratic account of the 1896–97 Canudos revolt and its bloody suppression in north-east Brazil by a journalist who covered the events combines ethnography, history and personal reflections. Although Cunha traffics in some now outdated (and a bit crackpot-sounding) racial and social theorizing, he shows sympathy throughout for the poor, racially mixed inhabits of the north-east, who stiffly resisted the forces of ‘Order and Progress’ before being crushed. Cunha’s work inspired Nobel-prize winner Mario Vargas Llosa when he wrote War of the End of the World and is an early example of the literature of the underdog, something I consider to an important intellectual tradition in Latin America. 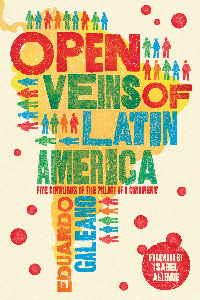 5. Las Venas Abiertas de América Latina (available in translation as Open Veins of Latin America: Five Centuries of the Pillage of a Continent) by Eduardo Galeano.

Certainly the most discussed history book here at Sounds and Colours, this account extends the kind of literature that the oppressed Euclides da Cunha pioneered to an entire hemisphere (well, the hemisphere south of the United States, anyway). Like others I have mentioned here, this book in itself is important as a historical document; the Marxist analysis and pan-hemispheric thinking captured in this book held powerful sway in Latin America when it was published in 1971. (I certainly don’t mean to imply this kind of thinking enjoyed uncontested dominance; indeed reaction to these kinds of ideas and the success of the Cuban Revolution can be seen in the bloody coups that plagued Latin America in the 1960s and 1970s.) The book is more than just a historical relic, though, and its idea can even be sensed in such places as Ana Tijoux’s 2014 track “Vengo”: “Vengo en busca de respuestas, Con el manojo lleno y las venas abiertas.” Few history books ever written can rival the kind of inspiration readers have found in the pages of Open Veins of Latin America.

Open Veins of Latin America is available from Amazon UK and Amazon US.