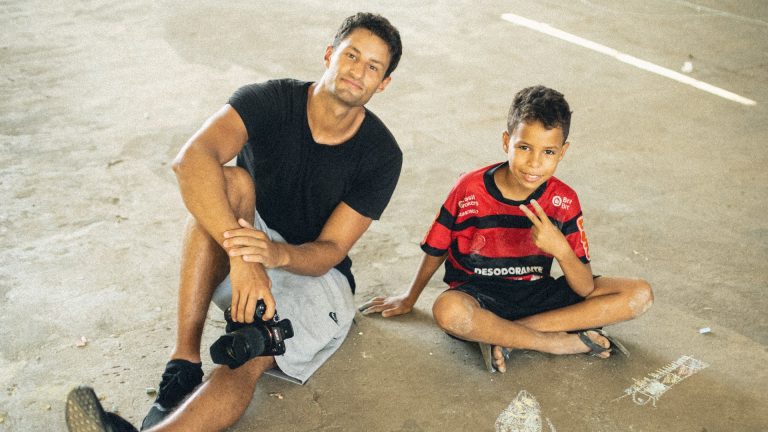 ‘Nando’ Offers a Poignant Rendition of Hope in a Brazilian Favela

A caterpillar drawn in chalk on a concrete floor. Its artist, the eleven-year-old Nando. The camera lingers, before cutting to dizzying shots: the Maracanã Stadium, a football stadium in Rio de Janeiro, Brazil; the Mangueira favela; a ‘slum’ across the road. From then on, these images serve as the short film’s driving force.

Nando premiered at the Tribeca Film Festival in New York City on June 10th. It is director Alec Cutter’s first independent film, and was filmed in Rio de Janeiro in 2019, right before the pandemic. The experimental documentary flickers between Nando’s own words – a boy the production team met in the Mangueira favela – and a poem written by Alec and performed by Seu Jorge.

I caught up with Alec Cutter on Zoom following the premiere at Tribeca and the director shared some of his thoughts about making this film:

“I knew I wanted to tell this story in this favela, the Mangueira favela, because of the proximity to the Maracanã Stadium… Football, soccer, is a huge tie in the film, but I always say it’s really not about football. It’s more about letting these kids know that they also belong.”

The Maracanã Stadium is the biggest football stadium in Brazil and the second biggest in Latin America. In Brazil, football is a unifying force – in a country plagued by so much inequality, it is one of the few things every household has in common. Yet, it’s also, in some ways, where the country’s stark disparity is most evident, Alec tells me. He talks about how the spirit behind football has been lost as it has become less accessible to the average Brazilian and going to a game in the Maracanã Stadium is nothing but a distant dream for children like Nando:

“Football in Brazil exceeds sport. It’s a part of culture. It’s a belonging to something that is so much greater than yourself. That has kind of been lost, largely because of the business side – how much money has come into the sport – which has alienated many communities, many children. But instead of saying ‘look how bad it’s gotten’, I really wanted to show how beautiful it can be when children like Nando can feel like a part of this … for people to see what it means for these kids, and to look at what’s at stake.”

The poem centres around the image of a caterpillar that “sonha com um mundo além do seu alcance” (“dreams of a world just beyond its reach”), and the cocoon it lives in. The album To Pimp A Butterfly by Kendrick Lamar and the song “The World is Yours” by Nas were the inspirations for the poem, Alec says. Kendrick Lamar’s butterfly, however, represents a child’s potential while for him it represents a sense of belonging:

“I asked myself why it was so important Nando went to the game; why was it so important he feels this? This brought me back to Nas’ song and then I realized – that’s the message. You do belong to the world. You belong to the beauty.”

Alec’s impressive grasp on tension, both normatively and visually, is evident in the film. The clash between the moments of cacophony and claustrophobia and the stillness of the aerial shots and microcosmic renditions of childhood, give the film both an urgency and a quotidian stillness. As viewers we know that it isn’t normal for Nando to hear and hide from gunshots but the candid way he narrates this affords us a peek into what normalcy looks like for children like him.

As part of their production process, Alec and his team volunteered at a school in the community, which is where they met Nando. The filming was particularly challenging, with production being cancelled or rescheduled various times because of shootouts or police raids. Alec was shocked at Nando’s reaction:

“I was inside Nando’s house one time when the shootouts started right outside and for Nando it was just so normal. He was laughing at me because I was a little anxious.”

At the school there was a girl who used to play around with Alec’s camera. A week after they started filming one of the teachers told him she had committed suicide. She was eleven. But life went on in the school. For them it was normal, Alec tells me, however, he stresses that he didn’t want to judge the favela or the people living there.

“I don’t want to make light of the many harsh realities that do exist in these areas, but there’s so much beauty in them as well that I think gets very overshadowed… I did not want to make a film that condemns the favela or the individuals in the favela. So, what I really liked about the cocoon is that it’s neither bad nor good. It’s the reality. There’s no condemnation of those who don’t make it out.”

The film ends with Nando holding a butterfly in his hands, but as the credits start rolling, we see shots of Nando and his brothers at a game in the Maracanã Stadium. It almost acts as a postscript. Unlike many films written about environments like the Mangueira favela, it isn’t symbolically or visually a ‘rags to riches’ narrative, and Alec actually pushes back on such interpretations.

“There are kids in this favela that haven’t even seen the beach in Rio de Janeiro, and this really gives light to how small their world is… it goes to show what it can mean for them to see outside of these walls and feel a part of something that’s bigger than the reality they know. Nando’s story is the same as millions of kids that don’t get to go… I would hope that if you never saw those shots [of them in the stadium] it wouldn’t matter.”

The film cleverly reflects the quiet magic of existence in a precarious environment without antagonizing the favela and its inhabitants. As the poem says, “apoderar o sonho da lagarta e tirar sua vida” (“to take the caterpillar’s dream is to take its life”). Beauty doesn’t come from the caterpillar’s metamorphosis into a butterfly. What’s beautiful is the caterpillar’s existence in the cocoon in the first place, the caterpillar “pertence a beleza do mundo” (“belongs to the beauty of the world”).

“Even with those who don’t make it out, there was and is that beauty inside of them, it may never see the light, but that doesn’t mean it wasn’t there.”