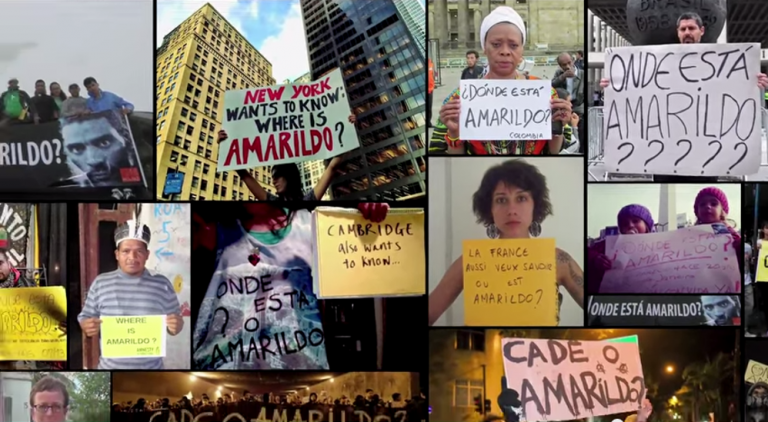 The case of Amarildo de Souza, the bricklayer who was tortured to death by UPP Military Officers of Rocinha favela on 14th July, 2013, made waves across Brazil and abroad. The story became a symbol of people’s attitudes regarding the landmark of police brutality, in a country where thousands are murdered by police every year.

This is the motto of the documentary, O Estopim (The Trigger). Director Rodrigo Mac Niven, uses the case of Amarildo as a backdrop to expose the fragility of the government militarization project and denounce what is happening in the routine of Rio’s favelas since the implementation of the pacification process in 2008. It is a story that had to be told.

In many ways, the significance of the title is two-fold. Not only was Amarildo’s story a ‘trigger’ for resistance, but the title also alludes to a pervasive, psycho-physical angst: an impending sense of threat of a society living at the fingertips of the trigger of a UPP officer’s gun.

Those who followed the #Where is Amarildo? campaign for justice are familiar with Amarildo’s photo, shared widely by the media. Yet beyond this, little is known about the torture sessions or his personal life. As such, Mac Niven mixes documentary footage with fictional scenes, tossing us back and forth to reports of SARC arrests, demonstrations and distant shots of Amarildo, played by Bruno Rodrigues.

However, in an attempt not to exploit Amarildo’s family, the focus of the documentary is on the community leader of Rocinha and Amarildo’s close friend, Duda, who recounts his own struggle with police abuse. “The kids used to see the police as security. You can’t say that today”. While Duda’s accounts are heartening, of course the family had to be present. Amarildo’s widow, Bete, is featured in interview, explaining her courage to speak out about her husband’s disappearance and campaign for many other ‘Amarildos’ killed in Brazil each year.

The slum is a solution, not a problem

But what gives the UPP the right to intervene? In an attempt to expose the weaknesses of the project of militarized public security, Mac Niven offers an expose of the history of the migration to the favela and its evolution. A story that points to deeper complexities inherent within a skewed Governmental system.These insights provide a cue for us to re-evaluate our preconceptions of the role of the ‘villain’ in the favelas. “The punishing system that tries to control this population operates as if the problem of criminality in Rio de Janeiro from the 1930s to these days was solely the responsibility of the slum populations.”

Before, Rocinha was off the city plan. As the documentary makes plain, the slum was a solution to non-housing plan by the Government that accepted everyone. Rocinha favela, the biggest favela in Rio in which O Estopim was set, has no basic sanitation and life is hard. A blame culture is manifest and the only ‘solution’ is for the military state to intervene and free the 70, 000 dwellers from the grip of the drug lords. But it won’t solve the drug trafficking problem and as the community members so duly explain: there simply cannot be a change from a community ruled by the drug dealers to a community occupied by the militia.

The story moves on to the police inquiry into the disappearance of Amarildo, and the bias and prejudice dominating the investigation is made explicit. The documentary questions attempts by the media and politicians to label Amarildo as a drug trafficker after his disappearance, a type of ‘criminalization of the victim’ that helps to justify police barbarism. There is a fantasy that the figure of the drug trafficker is someone who needs to be exterminated, somehow serving as a justification for the UPP to take an innocent man from his home,“torturing him, killing him, hiding his body and lying about what happened”, said Mac Niven.

Amarildo is often shown from far away, even by drone, highlighting the theme of a broken, fragmented identity that runs throughout. In the context of the film’s cinematography, the desaturated imagery of dark, dreary scenes of waves crashing and thunderstorms brewing in Rochina add to the severity of the topic. Amarildo’s face is rarely presented to the audience, and we are left wondering, “who is this man?” A mystery that elevates the intensity of his case. But during shocking, grotesque and savage torture scenes, light is shone on his face and he appears to the world.The result is an emotive spur that transfers the anger and pain he felt to that of our own.

The film displays vexed, chaotic snapshots of past demonstrations during Amarildo’s campaign, the military dictatorship and more recently, during the popular protests in 2013. Such protests remind us of the enduring struggles those marginalized by society face on a daily basis, from past to present. But they also spark important questions of justice, equality and politics – is the law on the right side? Does democracy truly exist in Brazil? Or is the country still living in the dark shadows of a dictatorship?

A short circuit of critical-reasoning

“In the communities, people rarely have courage to pick up their camera and film.” says Duda. The media is the only voice of Brazilian society. Spurred by heavy conservatism and a lack of analytical thought, O Estopim addresses issues relating to the reliability of everyday TV reports of the events that occur within the pacified areas of the slum.

Mac Niven’s aim was to show how Amarildo’s story is much more than a story about Amarildo, mentioning the brutal military mistreatment of many others in Brazil each year. The film is a small step forward in a continuous fight a favelado (favela resident) has for justice, but many more need to be taken. Amarildo’s wife, Elizabete Gomes da Souza and her 6 children commented that the demonstrations helped highlight the problem but not much has changed in Rocinha. Yet, questions regarding the implementation of a militarization model as a solution to a social issue have been posed, and we can only hope that eventually, the voice of the community will be heard.

“Imagine if you sat at a table with the Government, what is it that you demand?” asked Guilherme Pimentel, a member of the parliament commission, to Amarildo’s friends and family during their protest. The question can be answered in the rap lyrics sung by Amarildo’s brother at the film’s finale: “I am from the favelas and expect respect, these are my rights and that’s all I ask”.