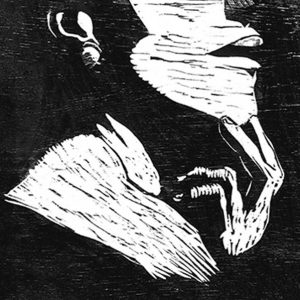 The name Passo Torto (which can be translated as ‘bent step’) is more than just a moniker, it is also a declaration of intent that embodies and even emphasises the mission of this Brazilian ensemble. It signals to the listener to take nothing for granted and wait for the most unexpected moves.

On their latest release, the experimental and whimsical São Paulo quartet are not interested in solidifying their reputation. On the contrary, they have proved to be more unpredictable than ever. For the occasion, they turned into a quintet, ‘accommodating’ the expressive voice of Ná Ozzetti, one of the most accomplished interpreters from the paulista music scene.

On this, their third release, Passo Torto change the balance in their songwriting, bestowing less importance on rhythmical aspects and allowing for freer song structures. This rejection of constrictions allows the musicians to explore and try new solutions. However, it’s significant how the musicians always seem to find the square of the melodic circle, even when the hallucinatory musical environments that they have assembled seem too puzzling.

The refined and pervasive voice of Ná Ozzetti helps the album to find a balance even in the ubiquitous tension. The singer, who has been one of the most influential figures in the MPB scene since the late 1970s – starting her career with Grupo Rumo and then going solo – represents a crucial addition to the ensemble line-up and style. Her expressivity easily adapts itself to the different tunes and tones, and sounds convincing throughout the album.

The best example of this harmonious tension can be found on the inspired second half of the album. “Perder Essa Mulher” is a wonderful, unstable and moody composition ruled by the pervasive, visionary double bass of Marcelo Cabral, Ná Ozzetti’s vocal digressions, deviations and free flights, and rarefied guitar distortions.

However, even when the melodies become more recognizable and easier to catch, as happens on “O Cinema É Melhor”, the result is curious while still preserving a pinch of unpredictability.

Thiago Franca – the album titled after Metá-Metá‘s sax player and close friend of Passo Torto members – can be easily considered as one of the unorthodox ensemble’s most experimental works. It is misty, quite demanding and at times even gloomy considering its lyrics and emotions, but it is also characterised by a remarkable creativity and innovative drive, offering a glimpse of São Paulo’s already-exhilarating music scene.