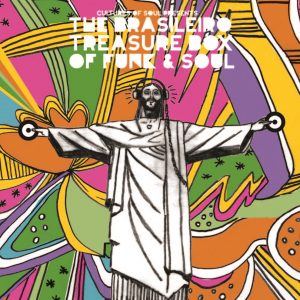 Review The Brasileiro Treasure Box of Funk and Soul

Think of psychedelic funk, put in some soul and place it in early 70s Brazil. That is exactly what awaits you from The Brasileiro Treasure Box of Funk and Soul. Released by Boston-based label Cultures of Soul, the album is an unusual vintage compilation of Brazilian jazz-funk, not least recognized by the psychedelic album cover featuring Rio’s Cristo Redentor in an explosion of colours.

Many of the tracks are rare, such as “Labirinto” by 2001 and Beto and Emilio Santiago’s “Bananeira”. They embody the essence of early 70s Brazilian samba-jazz and were very influential in forming the sounds of bossa nova musicians such as Jorge Ben. Tom Zé’s incredible endless guitar riffs in “Jimmy, Renda-se” add the psychedelic touch. Celia, a musical star of the early ’70s, is the only woman featured on the album with her track “A Hora é Essa”, a very light and playful soul performance with a slight vocal hint of Elis Regina.

Tony Tornado, a renowned Brazilian dealer turned singer and actor, is the only artist featured twice, and rightly so. His incredibly funky “Bochechuda” in which he laughs wildly throughout is probably the highpoint of the album. His other track “Aposta” is a classic Brazilian funk, reminiscent of some of legendary Raul Seixas’ music.

Brazilian soul-funk is big, especially the one from the glorious ’70s, and this album brings you right into the action.

The Brasileiro Treasure Box of Funk and Soul is available from Amazon UK and Amazon US.

You can listen to a mix of the compilation’s tracks by Greg Caz – one of the compiler’s of the record, along with Deano Sounds – below: