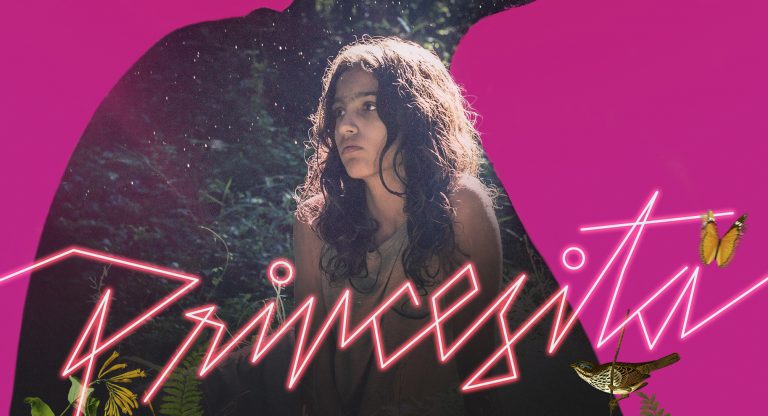 Princesita follows Tamara, a 12-year-old girl growing up in a cult in the rural south of Chile, being groomed towards leading the group, or rather, towards bearing the next leader. The film opened Raindance Film Festival on Wednesday 26th September and was followed by a Q&A with its director, Marialy Rivas.

The opening titles transport you to a stunning, slick, modern cosmos. Set against a black backdrop of outer space and it’s dimly twinkling stars, new biological life is buzzing on the brink of bud and flower, and neon laser beams become threads spelling out the titles. There is a severe vibrancy to the natural organisms we see, a bursting kinetic energy to them which repeats throughout the film as you gain a sense that the earth and water are boiling on the brink of extremity, of change. The fantastic soundtrack in these moments resembles blood pumping between your ears, the earth quaking (as it so often does in Chile) and rarely are you without the intimate sound of short, experimental, uneasy breaths.

The neon beams which thread together the title sequence, forming our cinematic cosmos, recur— forming religious crosses which light up dark scenes like warning signs, as a symbol of the bold energy but electric frailty of patriarchal power. The audience waits for the fuse to blow. The whole film marks a wave of energy at breaking point, a spark ready to catch, from which new life may grow.

The presentation of a universal religious symbol in gaudy neon also represents Marialy Rivas’ use of European fairy tales as inspiration for the film; “the gruesome, frightening cautionary tales” which were re-interpreted into tacky happy-ever-afters in the U.S., according to Rivas. The colour palette of the film gradually morphs from utopic honey hues based in the gold painting of religious art, to colder, darker blues once the mask of happiness-as-constant is broken.

There is a sexuality to the close-up shots often chosen to portray the characters. Tamara at times is androgynous, as all children can be. At others she is a woman, with full lips and mature thoughts. Then we are reminded of her tiny body weaving through the fields, or are shocked by the flatness of her prepubescent shape, plank-like and frozen in time. Sexuality in Princesita is perceptible, pronounced, but Princesita manages to steer clear of becoming a sexy taboo nightmare, thanks to voices of reason and caution, embodied almost single-handedly by Tamara’s public school teacher who senses Tamara may be at threat due to her astute sexual inquisitiveness.

Traumatic scenes are covered with a viscous dreamlike veil. As in a dream when we cannot shout, our legs are leaden and the world is drowsy and languid despite our panic, just like Marialy recounted from her research into dealing with abuse how so many ‘victims’ saw moments of abuse as nightmares that they were somehow disconnected from. Rivas deeply works this state of paralysed inertia into the film’s climactic close.

Personally, I wanted a glimpse into life after ‘the end’. I wanted to see how the organisms we see budding at the film’s commencement would grow, what would spring from the coals and ashes left behind. A film which deals with abuse and coming of age must show continuation to be true to its characters and its viewers. What about life after abuse? What about drama after puberty? It seems Rivas shirks the true narrative challenge in taking only the curious, dramatic formative moments and omitting the rebuilding, the outcomes, the progression. What’s more, if this film is to challenge the patriarchy we must at least see the brainstorming of alternatives.

Needless to say, the film is an experience. When introducing her feature, Marialy corrected her herself, “I hope you enjoy — well, experience this film.” Beautifully shot and designed to the tee, audiovisually the film is stunning. Its subject matter sparks conversation, shock, disgust… Some irksome questions were raised in the Q&A following the screening, from denial of Sleeping Beauty’s rape to reverting the gender of the subject. Yes, abuse is abuse no matter the gender, but Princesita marks the specific analysis of a patriarchal religious figure; a narcissist, a psychopath, an alpha male who is capable of everything but carrying a male heir in his womb.

Princesita will be shown again at Raindance on Saturday 6th October at 17.30. Tickets here. For more information about Raindance 2018, see here.