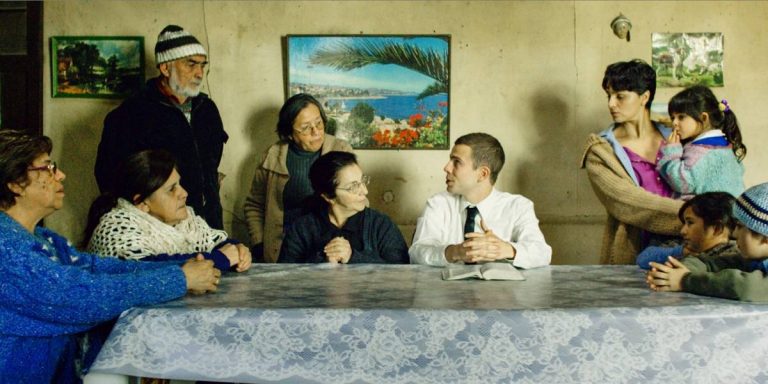 Not often do you stay in your seat to read every name in the end credits of a film. I wasn’t looking out for a friend’s or a well-known producer’s letters, checking for that cameo title, or waking up from a movie nap; the reason I stayed until the last name disappeared from the screen is that Damn Kids (Cabros de Mierda) made me care about the characters behind the numbers, the letters, the bodies.

In Damn Kids, Gonzalo Justiniano makes you read between the letters, as it were, proving that Chile (the whole) is more than just a sum of its surviving parts and its lost bolts and screws. Chile is resilient, nurturing, funny, sexy. And history is very personal.

The film presents us with a microcosm of Chile in 1983 in the form of Santiago’s Población La Victoria barrio. At the heart of this neighbourhood like any other, Gladys – a fearless natural leader juggling motherly duties, political mobilisation and sex life – is quietly planning a revolution. She accepts three missionaries from the States into her home (perhaps with a motive) but receives only one, Samuel Thompson, who becomes the village gringo and learns more from the locals than he ever had from religion.

Alongside intuitive and believable performances from Nathalia Aragonese (Gladys, a.k.a. “La Francesa”) and Elías Collado (Vladi, Gladys’ cohabiting young nephew), a Walkman device takes on a special role within the cast of protagonists. Samuel’s machine, brought over from the States, assumes the identity of Vladi’s father who is politically active and thus hiding from secret police. The Walkman, like Samuel himself, is transplanted into an intense other world, whose new reality takes precedence over any preexisting values or duties. The Walkman becomes beneficiary of the memory of Vladi’s father, in the form of Inti-Illimani, Victor Jara and Sol y Lluvia songs, as his own voice must be contained in covert private listening, banned from the megaphones. Part of the film’s diegetic sound, these songs strengthen and enliven the film. After reluctantly allowing the Walkman to fall into Vladi’s hands, Samuel assumes a new identity as Tío Sam.

Similar to other dictatorship art, in Damn Kids few are portrayed as mere heroes or villains. In a scene where Gladys and neighbours attend a local abuela’s birthday party, the encroaching glitz of North America’s Capitalism comically sparkles through the homely grit of the impoverished town. It is foreboding and a clear distraction but just as the party-goers cannot help but be mesmerised by the disco ball which is unveiled in the club, the audience can’t help but be charmed by their comic stupidity. The audience, unwittingly, holds off blame.

The film itself has, however, been criticised, whimsically described in El Mercurio as “pornography”. I believe quite the opposite. Bodies in Damn Kids were full of meaning, affection and history. We watch Gladys’ body liberate, nurture, rebel, excite, comfort, relent and finally sink in the Pacific Ocean. Although Gladys’ body is limp, pale, bruised, and feasted on by ‘beasts’, compare the emotive physicality of these truthful depictions to Pablo Larraín’s dissection of Chile in Post Mortem, where Allende’s body is shockingly brought out onto the autopsy table. A body stripped of humanity and dignity becomes simply an object, and in many ways the torture of ‘dissidents’ was pornographic in the dirtiest sense of the word. But there was grace, emotion and fatalistic humour in the bodies we saw in Damn Kids. It is necessary to make these connections on screen.

There was, however, a certain gratuitous character death, made especially confusing by its realisation at a whirlwind cinematic moment where real-time footage is blended with the powerful fiction. That said, when objects loaded with filmic emotion are employed into the narrative, it is this sense of injustice from (cinematic) authority which captures the anger of those robbed of family, friends and safety. Going that step too far is exactly what did happen, for years.

Criticised in Chile by those who prevent the open discussion of the thousands of disappearances, despite crimes represented in Damn Kids such as torture and covert body disposal being confessed in the 1999-2003 “diálogos de paz”, this film dared to show bodies in many states, humanising its characters and creating a deep bond between them and the audience.

To paraphrase Jorge Larraín*, Chilean academic and critic, what the military attempted was to make the very material base of [dissident] identity, their bodies, disappear. Not only were they killed, but an attempt was made to obliterate their memory and delete their very existence from the national historical record and collective memory. There can hardly exist anything more corrosive and threatening toward collective identity than this. Not only does Damn Kids create (somewhat amplified) character identities, but it presents the dignified, resilient and innocent bodies of such identities.

*Jorge Larrain, ‘Changes in Chilean identity: thirty years after the military coup’ in Nations and Nationalism 12 (2) (2006:329)