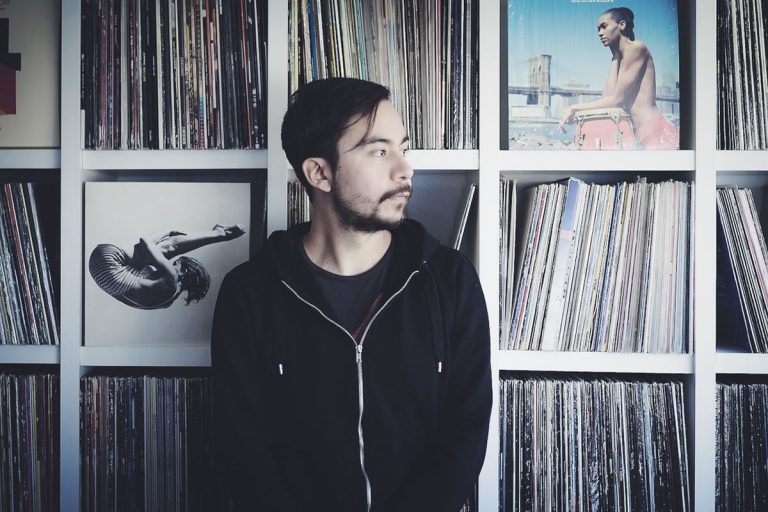 The early 90s were clearly a time of rejuvenation and cultural renaissance for Chile. Right in the aftermath of the bloody 17 year military dictatorship that took over the country during the 70s, rock, funk and reggae enthusiasts were sprouting from all across the country. It was only a matter of time for MCs and hip hop producers to take over and solidify an underground scene which was profoundly influenced by North American b-boy culture portrayed in film and television. Behind the sound of now renowned hip hop/funk crews like Los Tetas, La Frecuencia Rebelde and Tiro de Gracia, the punchy beats and samples created by DJ Raff were a common denominator. Towards the end of the decade, Raff became a benchmark of Santiago’s hip hop scene, and even though his work  has recently deviated into a more electronic route, his artistic DNA has never lost the sharpness acquired during the 90s. Right before the release of his awaited fourth LP Movimiento, we briefly chatted with DJ Raff about his trajectory.

Back in the 90s you were a renowned hip hop DJ in Santiago. How did this culture become a part of your life?

I started listening to hip hop when I was very little. I was around 12 or 13 and music was really starting to catch my interest. I think it all started after watching the movie Beat Street on TV. When I saw that for the first time I said “man, these people are able to come up with all these art forms without even using any instruments”. Watching those guys doing graffiti and busting rhymes all over the place was quite an inspiration. It also had to do with the fact that places like the Bronx and Brooklyn had a lot more in common with Santiago than whatever was shown on any Guns N’ Roses or Mötley Crüe video that was hot at the time. Back in the day (early 90s) not many people were into hip hop in the city, but I was still able to meet a small circle of fellow rap fans. Me and this group of around 100 people used to gather on Saturdays in downtown Santiago to exchange cassettes, videotapes and whatnot. Then I broke into the scene as an instrumental producer. Every once in a while, I ran into a hip hop project that had their lyrics set, but needed some instrumental support, so I offered them to come up with some instrumentals for free. I cooked them up with this extremely scarce system which consisted of a dual cassette tape, a sampler and a turntable. I did this for a bunch of projects, and that’s basically how I started building my name in the underground.

I think something that also played a big role there was the fact that in ’89, right after the end of the military dictatorship in Chile, lots of people who were exiled came back to the country, and many kids who were my age had been raised in places like Sweden, France and Canada. A bunch of those kids had discovered hip hop over there, and they had a much broader and more refined concept of what hip hop was. For instance,  Ana Tijoux was one of those people. She was actually raised in France, so when I met her in the 90s, I noticed that both her and other rappers like Seo2 and Jimmy Fernández had witnessed a much broader picture of hip hop culture. That definitely helped a lot when it came to generating a solid scene in Chile.

So when did you morph into an electronic music producer?

I’ve always been fascinated with doing new things. Back in the 90s, creating music based on samples was quite fresh and visionary in Latin America. Towards the end of the decade, I discovered electronic music and I noticed it’s this one-way road of experimentation that never ends. Raffolution was probably the biggest turning point in terms of becoming an electronic music project. However, I think I’ve always maintainted a lot of the elements that I had incorporated earlier in my career as a hip hop producer.

As a Latin American producer finding his way in the European scene, what do you think is the current state of Latin music among English-speaking audiences? Are there any projects you find particularly interesting?

There’s definitely an audience that’s interested in Latin American music and sounds rooted in Afro-Latin tradition. The market has been growing quite a lot, and the artist selection from labels like Nacional Records have had lots of influence in that sense. As for new projects, there are always lots of things happening in Chile and Latin America. You have people like Chilean rapper Jonas Sanche and Ecuadorian producer Nicola Cruz who are certainly pushing things forward. Definitely Anita Tijoux is also doing some great stuff. Ana has been growing a lot ever since Makiza broke into the scene back in the 90s, and she’s crafted a very interesting career ever since.

How does an artist like you get their song featured on the FIFA videogame sountrack?

The FIFA thing was actually thanks to Nacional Records. Besides the label, they have a very strong publishing department, and that has led to a few of my songs having these huge broadcasting channels such as video games and TV series like Broad City, which also featured one of my tracks. The fact that Nacional is located in L.A. has obviously generated a strong link between the label and the entertainment industry, and for artists that is obviously pretty cool.

Tell us about the new record. How will it be different from Raffolution and the rest of your previous projects?

Movimiento is out on October 20th. I think it is much more of an open and eclectic album, which is still rooted in my usual vein of experimentation and exploration. Constantly looking for a beat and percussive elements in general is something that has always driven me as an artist, and it’s certainly an element that’s present in this record as well.

Is your record label still strong?

It is! I founded Pirotecnia back in 2014 along with my wife Dalal Leiva. She’s a cultural promoter and I  live with her here in London. The new record will actually be pressed on vinyl and distributed in Chile vía Pirotecnia.

What about your side project, Raff VS. Bitman (RVSB)?

RVSB is on a bit of a standby phase in terms of new music. However, we still do our classic 4-turntable shows every once in a while, and Bitman is also releasing a new record very soon. We’ve toured quite a lot with that project, and for both of us it’s been this great experience. The project has prompted a good handful of parties all around Latin America and the U.S. and we’ve had lots of fun doing that.

Movimiento is out on Nacional Records. Listen to the entire album on Spotify: