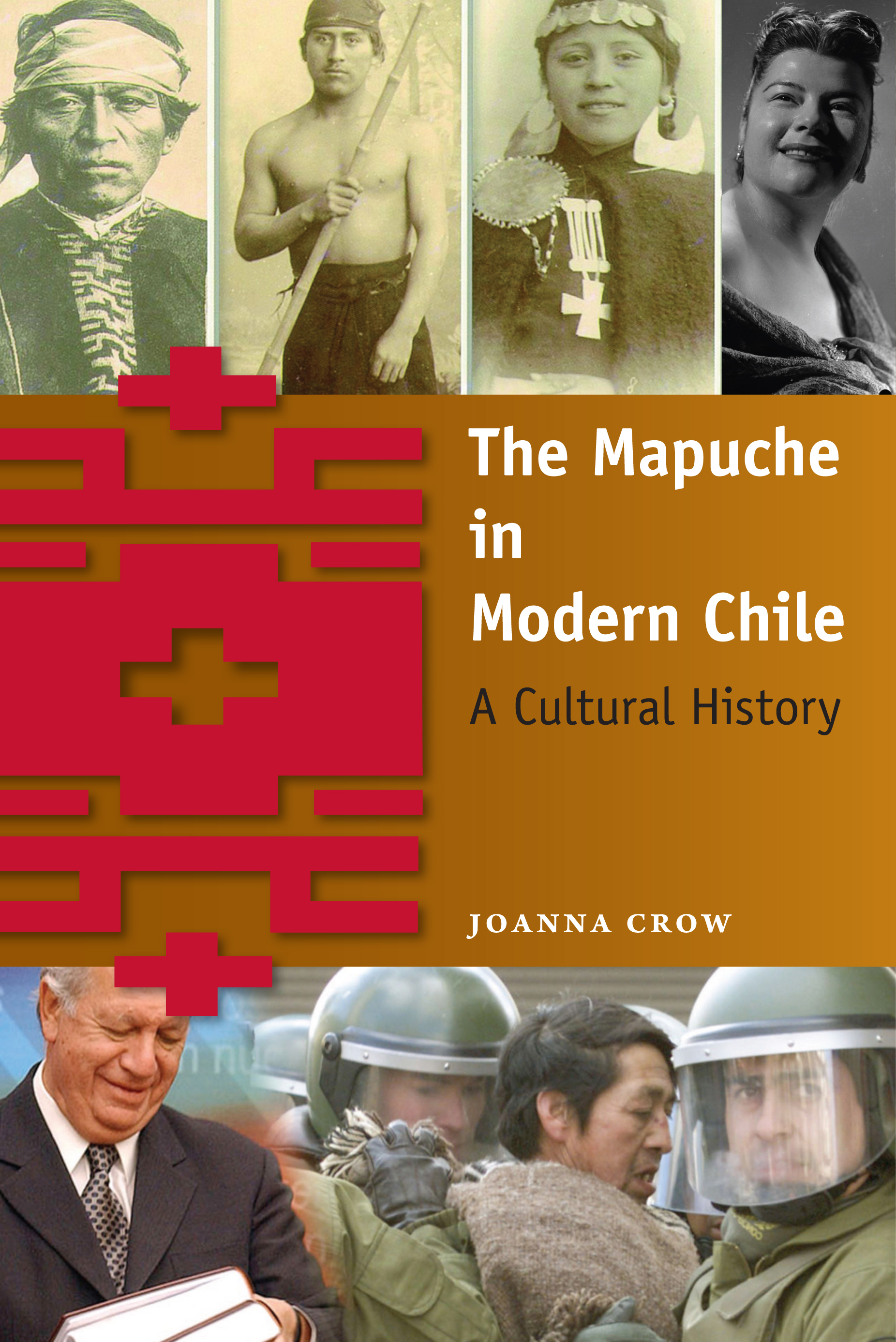 The Mapuche in Modern Chile by Joanna Crow

If the Mapuche people are known at all outside Chile, it is as the fierce Araucanian warriors that managed to repel Spanish and Chilean attempts to colonize their homeland until the 1880s. (The terms “Araucanian” and “Mapuche” are synonymous, but “Mapuche” is preferred in modern usage, “Araucanian” having acquired a somewhat derogatory connotation.) Joanna Crow’s The Mapuche in Modern Chile offers a valuable corrective to this myth, demonstrating that the Mapuche have most certainly not disappeared; indeed they comprise 4 to 10 percent of Chile’s current population.

Although not particularly stressed in Crow’s book, the Mapuche’s history shares some important similarities with many indigenous peoples in the Americas, from Alaska to Tierra del Fuego. For example, the end of effective military resistance to colonization did not mean that the Mapuche ever stopped thinking of themselves as an independent and distinctive people, and Crow’s book details some of the ways Mapuche political leaders and cultural figures, particularly poets, have contributed to a Mapuche “defiant history of difference” (the title of the book’s conclusion and an effective phrase to describe what the book is about) since the late 19th century. Crow effectively demonstrates that this stress on Mapuche distinctiveness has not entailed the absolute rejection of the Chilean state.

Manuel Manquilef, the son of a Mapuche father and Chilean criolla, provides one personification of this ability to both maintain one’s indigenous roots and adapt to the colonizing society. It would be easy to see him as someone alienated from his indigenous heritage after the conquest of Araucanía. Born in 1887 and educated in Chilean public schools, he entered teaching and rose to become a member of the national Chamber of Deputies in the 1920s, even advocating for the privatization of Mapuche reservation lands (reducciones). However, he always identified himself as a Mapuche, not a mestizo, spoke Mapuzungun, wrote nostalgically of his upbringing in a traditional Mapuche rural setting, and even insisted land division should proceed on Mapuche terms. Other Mapuches have similarly defied easy categorization.

Manuel Aburto Panguilef, a near contemporary of Manquilef, can almost be seen as his opposite: he steadfastly opposed the privatization of Mapuche lands and presented himself as something of a traditional mystic quite unlike a modern professional man like Manquilef. At one of Aburto’s Araucanian Congresses (1921–50) Manquilef was denounced as a “traitor,” yet the issue most assiduously promoted at the congresses was education, stressing both the need of the Chilean state to support Mapuche education and the need of Mapuches to adapt, at least partially, to mainstream Chilean society. By the late 1930s, he had even come to support military populist Carlos Ibañez in his bid for the presidency.

Despite their differences, both Manquilef and Aburto found ways of being both Mapuche and active participants in Chilean politics. This flexibility in identity has often not been appreciated, even by those sympathetic to indigenous peoples. Like other current scholars, Crow has some pointed criticism for the Latin American indigenismo movement of the middle decades of the twentieth century and the cultural figures influenced by it, including beloved Chilean poets Gabriela Mistral and Pablo Neruda. Despite their respect for and reverence of Chile’s indigenous peoples, neither Mistral or Neruda ever quite got beyond portraying them as simple, rural people who were either outside or solely victims of the modern economic and political order, failing to appreciate that indigenous peoples themselves could be participants in that order. During the 21st century, the poetry of David Aniñir has depicted the experiences of Mapuches in grim urban settings, a stark difference from the rural and often idyllic settings portrayed by Mistral and Neruda.

Musicians Violeta Parra and Victor Jara fare somewhat better than Mistral and Neruda in Crow’s judgement. They decried the historical forces that victimized Chile’s indigenous people, but their songs detail the resilience of survivors, not of a people incompatible with modern Chile. The music of Victor Jara resonated so much with the Mapuche poet Elicura Chihuailaf that he translated twenty of his songs into Mapuzungun for the collection Canto Libre/Lliz Ulkantun (Free Song).

While Crow’s depiction of the Mapuche in modern Chile is complex, she argues that the modern Chilean state’s interactions with the Mapuche have been just as complicated. One might think that the repressive right-wing military dictatorship that came to power on September 11, 1973, would have had a chilling effect on any potentially divisive cultural expression. Indeed, Decree-Law 2568 of 1979 promoted the division and privatization of indigenous lands and abolished distinct legal or social standing for indigenous people. Yet, the Ad-Mapu organization achieved legal standing under the regime despite its criticism of Decree-Law 2568 and the known leftist orientation of some of its members. Similarly, the historical play ¡Lautaro! Epopeya Del Pueblo Mapuche, written by Chilean playwright Isidora Agurre at the request of her friend Mellilán Painemal, debuted in Santiago in 1982 despite its message of resistance and the involvement of formerly exiled nueva canción musicians Los Jaivas. The Concertación governments of the post-Pinochet era have promoted themselves as respectful guardians of Chile’s multicultural people in contrast to the previous regime’s vigorously assimilationist stance, but their support for disruptive development projects in traditional Mapuche territories and punishment of indigenous critics of these projects as “terrorists” have earned strong rebukes from Mapuche peoples, including those employed in the public sector as educators or museum professionals. The state may change, but the Mapuche continue to seek methods to stress their “defiant history of difference” and status as a distinct, independent people in modern Chile.

It should perhaps be cautioned that The Mapuche in Modern Chile is very much an academic book. Although relatively short, the writing is dense, and the complex, somewhat shifty argument Crow constructs requires careful reading. It is also clear she owes a substantial debt to other scholars, especially Florencia Mallon. However, readers interested in Chile and Latin American indigenous peoples will likely find this a valuable addition to their collection.