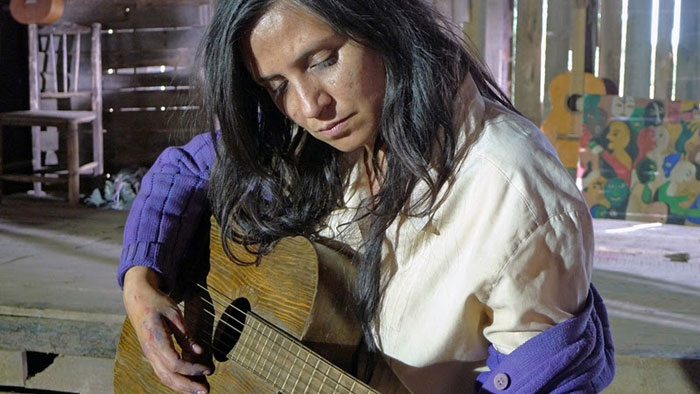 A tragic portrait of a talented yet troubled woman, Violeta Went to Heaven, from Chilean director Andrés Wood (Historias De Fútbol, La Fiebre Loco) allows us a touching glimpse at the life of Violeta Parra, singer, painter and mother of the Nueva Canción movement. Well known within Chile and by fans of folklore worldwide, Parra lived a fascinating yet tragic life. Born in 1917 in a small town in southern Chile, she learned to sing and to compose music from her father, a music teacher. However, it was when her father became gravely ill from alcoholism and later died that she and her sisters, as Las Hermanas Parra were forced to make a living by playing their music in the local bars and restaurants and even, in some cases, brothels. As Parra states in the film, she was never really taught to sing and to play music, she merely learnt by observing the adults around her. Her home was filled with music as a child, we learn, and it is here that she began to develop her unique and authentic style, learning to play the guitar at 9, composing her first song at 12.

Francisca Galan, as Parra, embodies the singer so completely that it at times feels as though you are watching a documentary rather than a biopic. This effect is especially increased by the interspersion of reenacted interviews with Parra, which give us further insight into her life and worldview. However, as expected, it is the music that really allows the characters to jump out of the screen. The emotion and intensity of Violeta’s voice as it accompanies the actors through this recreation of her life makes the story passionate and affecting in a way that it wouldn’t otherwise be. This passion and sincerity is what made Parra such an iconic figure in her home country and elsewhere, popularising the Nueva Canción movement and securing her place as one of the most important South American musicians of all time.

The life of Violeta Parra was restless and, at times, chaotic. In the film Parra is portrayed as an energetic and passionate woman who puts her art before all. Wood uses flashbacks to various eras of her past in order to cover the important events in the singer’s turbulent life, including her doomed trip to Paris with her Swiss lover, her impoverished childhood, and her final days at the campsite in La Reina which she dreamed of turning into a cultural centre for musicians and folklorists. This effect can be in itself turbulent; the film that results, rather than being a traditional biopic, is more of a tapestry of songs and glimpses into the singer’s thought. However, this means that the focus can rest on the haunting and relevant music that Parra produces, avoiding the temptation to sensationalise what has turned out to be a beautiful and emotional film. Although those who are unfamiliar with the life-story of Violeta may not leave with a crystal-clear idea of her life’s events, they will certainly leave with her melodies in their head, perfectly accompanied by memories of Wood’s beautiful shots of the Chilean countryside. And in this way, as any musician would hope, Violeta Parra is defined by her music rather than by her tragic life.