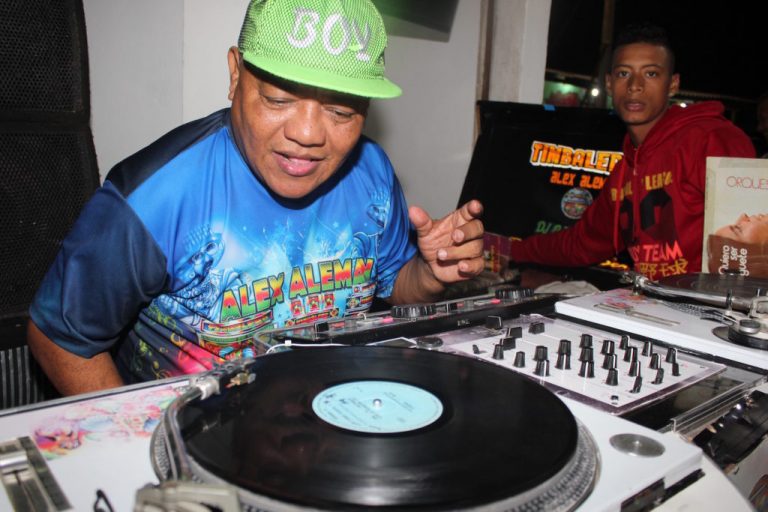 “¡Barranquilla es la capital mundial de la mùsica africana!” (Barranquilla is the world capital of African music). If you ever have the chance to visit the city of Barranquilla on Colombia’s Caribbean coast, then there is a good chance you will hear these words. Rumour has it, Rémy Sahlomon said them first. The Congolese guitarist had his golden age during the soukous years of African music. He is still, with others of his generation like Tilda Roy and the much-missed Lokassa Yabongo, a superstar in Colombia. Especially in the city of Barranquilla where African music from the 70s and 80s is queen.

It may sound perplexing to announce that stars of Congolese music from the 80s are now, in 2017, living a golden retirement in Colombia. But, let’s start from scratch. Anyone who has had a decent internet connection over these five past years has, at least, read an article or tweet, or seen a video about young Latin Americans proudly revindicating the Native American (Prayers ‘’Mexica’’) or Afro-Latino (Afrolatino Travel) aspect of their identity, whether using articles, videos, fashion, music or art. The affirmation of plural identities is not something new and has always been there on the continent. A ‘real democratization of the internet’ was necessary though for Latin America to be heard by the rest of the world.

The blogger Fabian Altahona Romero (Africolombia) is one of these young Latin Americans. In Colombia he belongs to the new generation of picó lovers, sharing his culture via the different possibilities that the internet offers. The first time I saw him was via an interview in a mini documentary series by Native Instruments called Tropical Frequencies. After watching the 24 minute film, I knew that the only thing left I had to do was: go to Colombia.

I am not proud of it but before I started this journey the only three words that I had on my mind when thinking about Colombia were: Escobar, FARC and cocaine. But the possibility of going there in person was too good to miss out on. And so, after months saving and endless stopovers in US airports (my plane ticket only cost 400€…) I finally arrived in Colombia!

To be honest, Barranquilla is not ‘aesthetically’ the most beautiful city on Colombia’s Caribbean coast. Cities like Santa Marta or Cartagena, which are also coastal, offer far more postcard appeal. Historically, Barranquilla is the most commercial city in the north of the country and this you can still see today. The beauty of the city, thus, doesn’t lie in its number of colourful colonial buildings, but somewhere else. In order to find it you need good city guides; mine were Sidney Reyes Reyes, Salvador Reyes Herrera, Pedro Marte Herrera (Pintao), Joni Cassiany Kañate and Alessander Delgado Cardena. I spent most of my time with them, exploring different working class neighbourhoods and I finally discovered where lies the true beauty of the city. 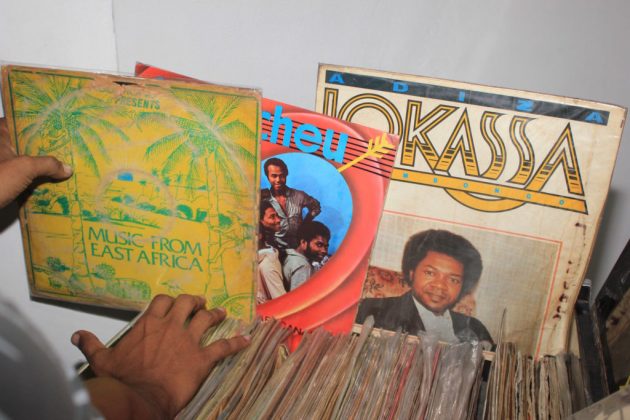 Picó is to Colombia what Sound System is to Jamaica

The picó, also known as turbo in the past, is a 2-meter high by 1-meter large sound system whose particular feature is to be covered by unique and colourful paintings. Its first appearance in Colombia dates back to the 1950s and, since then, it hasn’t stopped vibrating the heart of the coastal cities with the sound of Afro-Colombia. Cumbia and porro were the first sounds to grace picós, then salsa and African music arrived in the 60s and champeta later in the 90s. However, the most appreciated music is African music, especially central and west African music (soukous and highlife) from the 70s and 80s. Artists such as those mentioned earlier, but also Prince Nico Mbarga, Ernesto Djedje or Pepe Kalle, are still superstars today in Barranquilla and their records considered gold.

Another particularity of the picó is that almost all DJs mix with vinyl turntables only. Each picó owner has his name on the sound system, with his own style and colours, e.g. El Timbalero, Anco Africa or El Coreano. These local stars, amongst others, make the picó world live! Indeed, you don’t have to drive thousands of miles to find them. Picós are in every corner of southern working class neighbourhoods like Nueva Colombia. 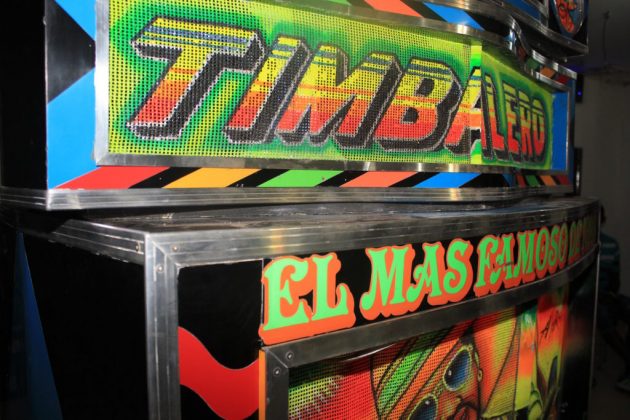 No matter their height, volume or colours, one thing is for sure, there will be a picó nearby. You can find them in people’s houses, bars, clubs, in grocery stores, and even more ubiquitously thanks to the pocket size versions. Every sunrise is a good occasion for a sound duel between neighbours, neighbourhoods and between cities. The question is: who will make the greatest sound, and with what records and which sound systems? Barranquilla’s streets never snooze!

A Cultural Industry of Its Own

The picó makes the heart of the city beat by gathering a wide range of professions: sound box craftsmen, speaker engineers, electricians, picotero DJs, and all kinds of marketers, including painters whose work on advertising and picós are considered works of art. William Gutiérrez is one of them. He has a strong visual identity and has now reached global renown.

The list of those working in picó culture continues with vinyl collectors, retailers and of course the picó owners themselves. With their sound systems, and a bit of marketing, they are able to gather the whole neighbourhood together for a giant open air party. It is very much the case that this cultural industry, that seems to be self-sufficient within the city, mostly owes its success to those who gather every day around the picó to enjoy the ‘sonido alto’ (loud sound), the people.

“Picò is Eminently of the People!”

This is what the painter Dairo Barriosnuevo told me during our interview. Sunday afternoons in the neighbourhood of Nueva Colombia illustrate that very well. There is no need for a specific reason to get the picó out. No matter what the time and whatever the reason there is always at least one sound system that will be playing, with a crowd gathering around it. Couples dance, elders talk, kids play and music lovers listen. It really doesn’t have this ‘untouchable totem’ aspect that I thought it would.

During my stay there, Sidney Reyes Reyes always reminded me of the bonds between picó culture and the Afro-Colombian population. The ethnic division of past centuries all over the country is still visible today and coastal cities such as Cartagena, Santa Marta and Palenque de San Basilio have a large Afro-descendant population, especially in working class neighbourhoods. Attachment to Africa via music is still very strong but dance also plays an important part.

Barranquilla’s carnival illustrates this well by tracing back traditional dances from Europe, Africa and America. Who would have imagined that dancing ndombolo (a Congolese dance) would be among the criteria to be elected queen of the carnival? There is such a blending in Barranquilla that it is hard to tell with confidence who is descended from where. However, whether light skinned or dark skinned, everybody says that there is African blood in their veins. This they are very proud of. 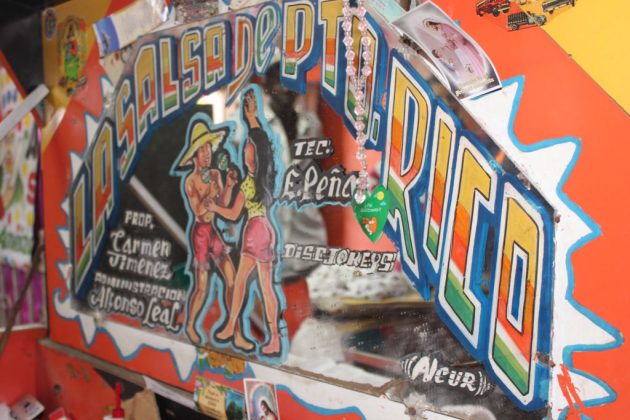 No One is a Prophet in his Own Land

It came as a surprise to learn that picó culture was considered a generator of violence by Colombian authorities. This reputation owes itself to the ‘popular’ aspect of the culture, but also, and mainly, due to champeta. More than just a dance or a music style, champeta is a way of life on the Caribbean coast. It’s a way of life that could be described as dangerous, sexually explicit and encouraging drugs and crime. To this though, many people have retorted: “¿Serà que en las comunas de Medellìn hay picós?” (Are there any picós in Medellin municipalities?). The counter argument is that crime and drug use are still present in Colombian cities that have no picó culture. The path to a complete and fair realisation of what constitutes this culture is not easy. However, a lot of people and organisations like CPPC (Còmite Pickò Patrimonio Cultural) are ready to take on this challenge and highlight its cultural worth.

95% of all Africans that Came to the Americas, went to Latin America and the Caribbean

To conclude I would say that picó culture has many influences, whether African, American or Jamaican. In the end though, the result is very Colombian. And concerning the picó, as strange as it might seem, you cannot help but stay glued to it, even if this sound system could literally destroy any eardrum within a 5-meter distance. In the past, black culture from Latin America and the Caribbean’s Afro-descendent population has been overshadowed by North America and its sizeable media outlets. Finally it is finding a way to shine all over the globe.

As for me, after a month spent in the city of Barranquilla, when thinking about Colombia the only word that comes to my mind is: ¡sabroso! (tasty!).

You can watch a short documentary film on picó culture below. ‘Barranquilla – The Art of Picò’ is produced by Society Films and directed by Cavé Okou.