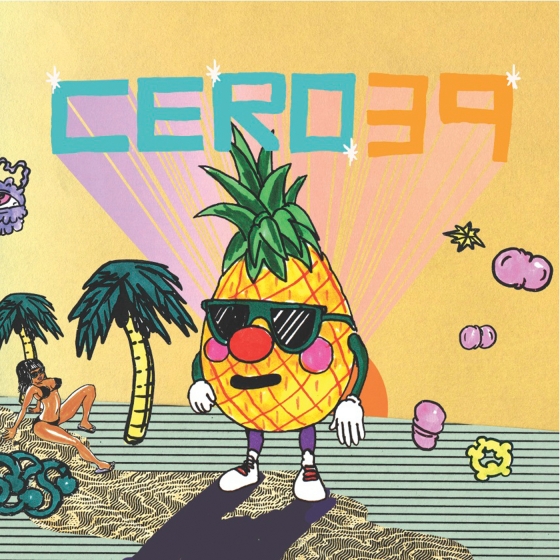 You’ve probably heard Mauricio Alvarez’s project, Cero39, before. He’s churned out remixes for a lot of the cumbia digital heavy hitters, from Colombia’s own Bomba Estéreo and Lido Pimienta, to ZZK greats Fauna. Now we get to hear his own work through Móntate en el Viaje, an album full of sexy rhythms and vocals alongside some sweet adaptations of cumbia, dub and vallenato music; badass bass and the best use of wobble I’ve ever heard.

Móntate en el Viaje (Join the Journey) is indeed a sonic trip through the rhythms of the Caribbean coast of Colombia and beyond, where Alvaréz goes heavy on the reggae dub and dembow, the rhythmic base of pre-Daddy Yankee reggaeton (known for its original name, “underground”). The cumbia and the vallenato are also very present, but what struck me most about the record is that, on most tracks, both of these rhythms are toned down in order to give space to elements from other genres such as dubstep and moombahton. There’s also some great female MC’ing.

The record is hypnotizing, to say the least. Cero39 manages to mix in some of the hottest rhythms around and give them his own spin, like the tropical bass heavy “Oie Tu! La de la Cachuchita”. Another interesting track is the vallenato-dub “Paseo”, which features a couple singing about a courtship gone awry. The tracks on Móntate en el Viaje feed off of each other’s energy, something evident on the “Paseo” follow-up “Caballito”. This song is a mixture of Fauna-style synths and cumbia, with the dembow rhythm section driving the track into sleaze-filled frenzy towards the end. Needless to say, that is one of the party anthems of the record.

You can also hear the influence the ZZK school of cumbia digital has on Cero39’s sound. You can hear a little bit of Fauna, in terms of vocal styling and synths, on “Caballito” and “Estate Cumbia”, which are two of the best tracks on the album. Chancha via Circuito’s minimalism can be spotted on “Junto al Mar”, a collaboration with Etelvina Maldonado. But the similarities stop there, as this very same track morphs into a dubstep monstrosity 30 seconds into the song. And I mean this in a good way, as it is some of the best use of wobble and bass I’ve heard outside of early UK dubstep; it’s done with the subtlety and finesse some recent acts have lacked. The best part of it all is that it doesn’t drown out Maldonado’s deep and haunting delivery, which drives the song to the core of your bones if you listen carefully.

In Móntate en el Viaje, Alvarez also gives us some of the most fun, explicit and unapologetically sexual lyrics, including “Camila”, the story about a sexy woman who turned out to really be a sexy man. Some might take offence to these types of lyrics, but it adds colour to the journey Cero39 is taking us on. It also adds to a strong Caribbean identity, where raw storytelling might as well be a profession.

The album looses a bit of steam on “Vamos”, but it’s only a spot on an otherwise great album that’ll make you want to grab a beer and hit up your nearest beach or club. Hey, summer will be here pretty soon, so you might as well get an early start with Cero39.

Móntate en el Viaje will be released on CD in Germany on 17th May and the rest of Europe on 20th May 2013. It is currently available digitally via iTunes.