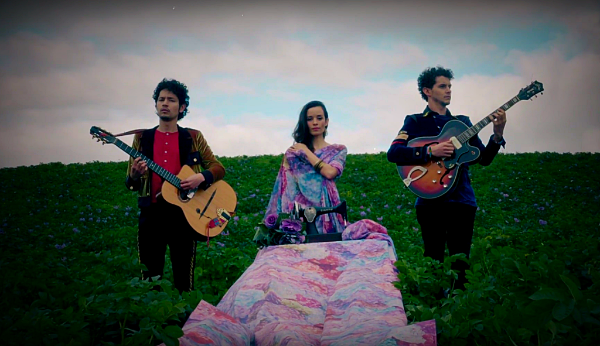 Monsieur Periné have just released a new music video for “Nuestra Canción”, one of the highlights from their last album Caja de Música, and which features the talents of Dominican star Vicente Garcia. Directed by Christian Schmid Rincon, the video was shot in the beautiful Colombian region of Cundinamarca.

Influenced by Django Reinhardt and gypsy jazz music, Monsieur Periné’s unique style combines a variety of Latin sounds and genres, like cumbia, son, bolero, tango and samba accompanied by the tones of traditional South American instruments, such as charango and bandoneon. They have been described by The New York Times as a “cleverly anachronistic group which often harks back to Parisian Hot Club jazz.”

Back in October last year Monsieur Periné won the Latin Grammy for Best New Artist and off the back of that, they are now preparing for their first U.S. West Coast tour, where you can expect to hear plenty of cuts from their amazing second album, Caja de Música, produced by Eduardo Cabra, the virtuoso Visitante from Calle 13.

Here are the upcoming tour dates for Monsieur Periné in USA: